A federal report takes a deep dive into a truck-only VMT tax, analyzing all scenarios.

As the Highway Trust Fund is poised to dry up by 2022, Congress is seeking a long-term solution, including a vehicle miles traveled tax. The Congressional Budget Office recently published its analysis of a VMT tax specifically on commercial trucks.

The report looks at the various scenarios that could come into play to employ a VMT tax, including benefits and consequences of doing so. It was released on Oct. 17.

The report identified three main areas upon which lawmakers will need to decide:

The Owner-Operator Independent Drivers Association, which weighed in during the data collection, is reviewing the report.

“It’s no secret that Congress is looking for a long-term solution to keep the highway trust fund solvent,” said Mike Matousek, OOIDA’s manager of government affairs. “A mileage tax, or VMT, is one of many options being considered. Our goal is to review the report, discuss it internally, get as much feedback as possible from our members, and make sure Congress knows where we stand on this issue.” 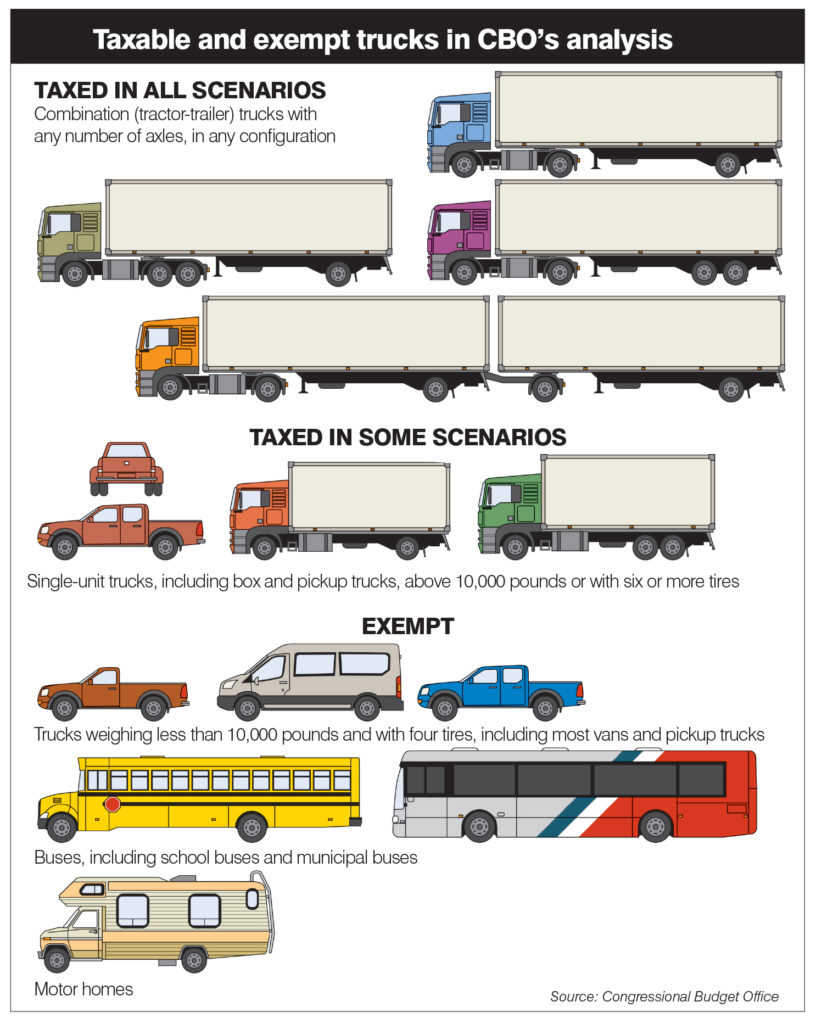 CBO’s report identified two factors to consider when deciding on the tax base: set of trucks and set of roads subject to the tax.

Although a uniform tax rate may seem like the simplest solution, the CBO identified three other options that employ variable rates. The easiest of those options is a tax rate based on whether or not a truck is a combination or single-unit truck.

Another option is to tax trucks according to vehicle weight or weight per axle. Justifying this approach, the report notes that pavement damage sharply increases with trucks’ weight per axle. A VMT tax that varies with weight per axle may give carriers more incentive to use trucks with more axles and reduce damage. A uniform tax on all trucks would not encourage this move. Currently, the fuel tax encourages fewer axles due to road friction’s effect on fuel efficiency.

Tax rates can also vary by location or location and time of travel. For example, local roads or noninterstate highways could be exempt from the VMT tax. If a variable tax by time of day were to be employed, the report suggests it could reduce traffic congestion. CBO argues that a time variable VMT tax will give truckers incentive “to reduce their contributions to congestion by shifting their routes or modifying their schedules.”

Once a tax base and rate structure have been determined, how will necessary data be collected?

One method is taking odometer readings, either by self-reporting or inspection by government officials. Payments could be made by mail or online. The benefit of this method is the little to no costs to implement. However, there is a high enforcement cost. Among the five states that currently have a VMT tax, evasion rates range from 5% to 50%. VMT taxes could be verified much like International Fuel Tax Agreement, i.e., selective auditing. Another solution is to inspect odometers during safety checks. Odometer readings are only good for uniform tax rates, not variable rates by roads, location or time.

Another method includes RFID readers, much like toll transponders. Payments would be similar to toll collections. One weakness is the high cost of implementation. This will require spending for readers on gantries, roadside pillars or collection booths. RFID systems covering all interstates would cost approximately $55 billion, according to the report. For all roads, that price tag would skyrocket. On the other hand, enforcement costs will be low compared with odometer readings. Also, RFID readers could employ variable rates by location.

The other method is using an onboard device, such as the ELDs already on many trucks.

Considering that not all trucks have ELDs, the implementation costs will be somewhere in between odometer readings and RFID readers. Approximately 25% of all commercial trucks have (or will soon have) ELDs. The remaining 75% would need to purchase a comparable device. Costs for onboard devices could be imposed on the trucking industry or borne by the government through a subsidy program.

Regarding the integration of ELDs, enforcement costs would be low. ELDs could also allow a variety of options in terms of variable costs. One hurdle to cross is federal regulation. According to the report, a change in law might be needed to allow ELD data to be used to assess or enforce a VMT tax. Under current federal law, enforcement personnel are allowed to use ELD data only to determine compliance with hours-of-service rules.

VMT tax, fuel tax or both

During congressional hearings, it was suggested that a VMT tax replace the fuel tax. However, CBO’s report suggests the most effective route is to introduce a VMT tax on top of the fuel tax.

A 2015 analysis cited in the report found that mileage-related costs (pavement damage, congestion, accidents and noise) were roughly three and a half times as large as fuel-related costs (greenhouse gas emissions, air pollution, dependence on foreign oil) nationwide.

To address both costs, the report says it will “require both fuel taxes and VMT taxes because a VMT tax alone would not give carriers an incentive to improve fuel efficiency.”

Consumers may ultimately pay. If a VMT tax were added to the diesel tax, heavy vehicle use tax, tractor/trailer sales tax and tire taxes, some freight may move to rail. This would increase prices for shipped goods.

Another option would be to institute a new federal tax on all highway users, such as a tax on electric vehicles or on vehicle miles traveled.

Effects of a VMT tax

How much money could a VMT tax on commercial trucks generate?

According to CBO’s report, a tax of 1 cent per mile on all trucks on all roads would have raised about $2.6 billion for the Highway Trust Fund in 2017. Approximately $1.6 billion would have been collected if imposed only on combination trucks.

If that rate were bumped to 7.5 cents per mile on all trucks, $19.4 billion would have been collected.

“That amount would be enough to replace the $14.6 billion in Highway Trust Fund taxes paid by truck owners in 2017 plus their proportional share, based on those taxes, of the $13.5 billion shortfall between the Highway Trust Fund’s tax revenues and outlays that year,” the report states.

A VMT tax that excluded local roads would generate 21% less in revenues if all commercial trucks were taxed and 13% less if only combination trucks were taxed. For a tax only on interstate highways, the corresponding reductions are 59% and 47%. Those figures do not reflect the possibility that truck owners might divert some traffic to untaxed roads.

The report also mentions that a VMT tax could change trucking behavior. More specifically, it could give incentives to change what kinds of trucks carriers use or where or when they drive. LL 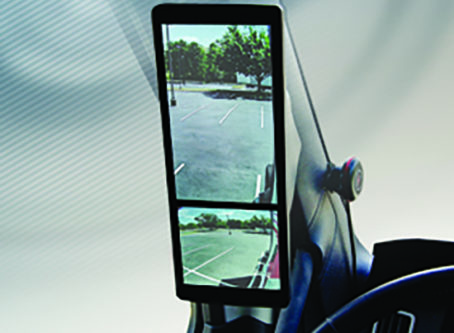 The National Highway Traffic Safety Administration is looking at the possibility of allowing camera-based rear visibility systems as an alternative to inside and outside rearview mirrors. The advance notice of proposed rulemaking published in the Federal Register on Oct. 10. The comment period was set to end Dec. 9. Current federal motor vehicle safety standards […]