Dixie Fire shuts down California highways; I-70 in Colorado still closed due to mudslides

Mother Nature continues to wreak havoc in the West, with the Dixie Fire shutting down several highways in California and mudslides in Colorado keeping Interstate 70 shut down.

According to the California Department of Forestry and Fire Protection, dozens of zones are under an evacuation order. Counties affected by the Dixie Fire include Butte, Lassen, Plumas and Tehama. Cal Fire is reporting the following road closures:

Motorists can check conditions of specific highways at Roads.dot.ca.gov or go to QuickMap.dot.ca.gov.

Meanwhile in Colorado, mudslides in Glenwood Canyon have kept a portion of I-70 closed, forcing motorists to take long detours.

According to the Colorado Department of Transportation, I-70 remains shut down between Exit 116 (Glenwood Springs) and Exit 133 (Dotsero). Glenwood Springs is open and accessible from the west via I-70 and from the south via Highway 82. I -70 is closed only through Glenwood Canyon due to mudslides. 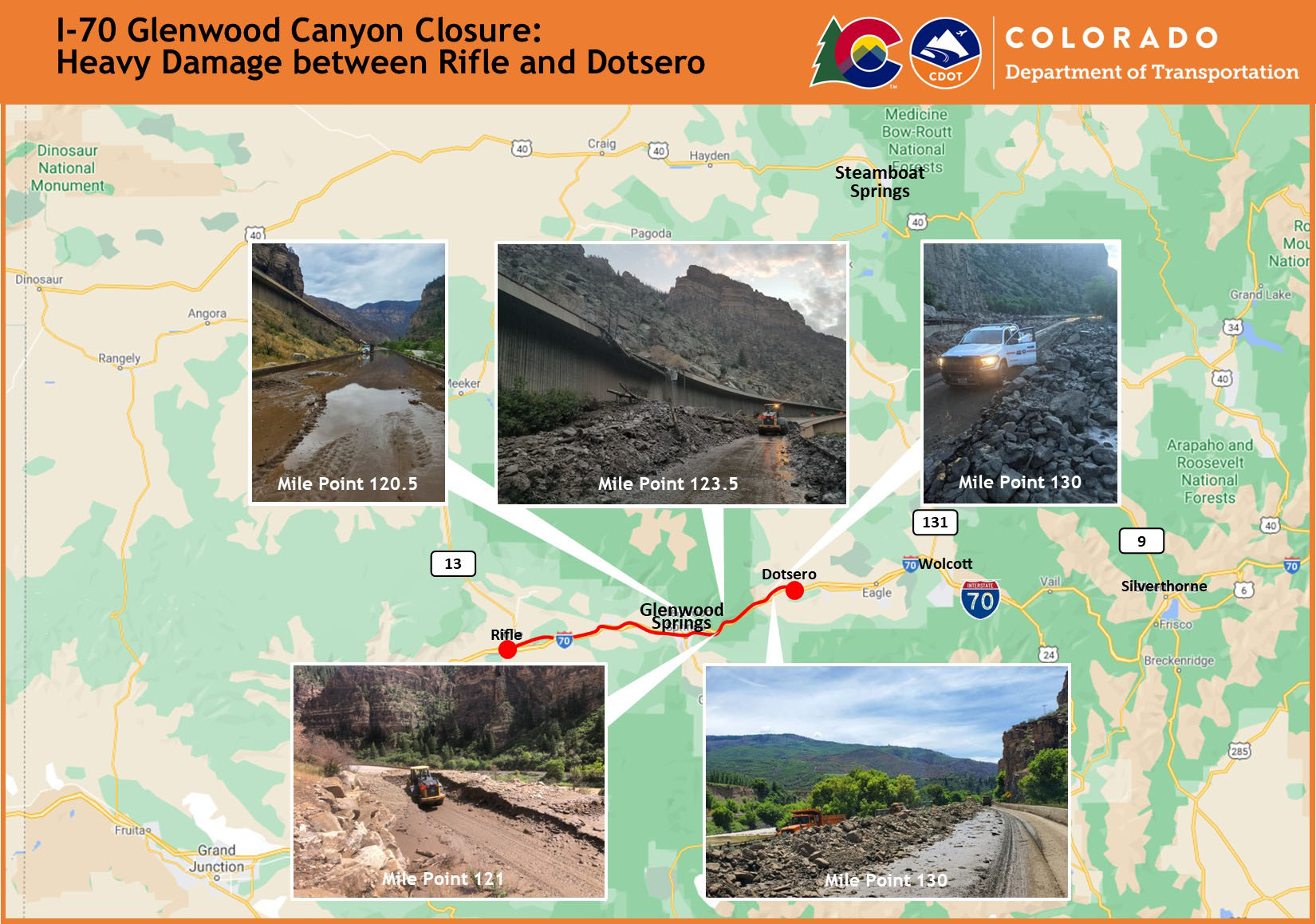 Westbound motorists should exit I-70 at Exit 205 (Silverthorne) and travel north on Colorado Highway 9 towards Kremmling. Travelers will continue west on U.S. Highway 40 and then south on CO 13 to complete the alternate route and return to I-70 at Rifle (Exit 90). Eastbound travelers can detour using the same route in reverse.

CDOT advises truckers who plan on traveling through Colorado to take Interstate 80 through Wyoming instead. Additionally, CO 82 Independence Pass is not to be used as an alternate route. No commercial vehicles or vehicles over 35 feet are allowed. Delivery drivers, RVs and trailers are also not to use Independence Pass to bypass the I-70 closure. That highway is a narrow, high mountain road with tight switchbacks and heavy tourist traffic, according to CDOT.

Citing concerns over the lengthy detour’s impact to regional and national commerce and travel, the Colorado Motor Carriers Association is asking CDOT to revive plans to create a shorter detour route.

The association’s president, Greg Fulton, published an op-ed urging officials to begin working to develop the nearby Cottonwood Pass as an alternative route. One that could also accommodate truck traffic. One estimate by CDOT puts the cost of such improvements at around $50 million.

“We suspect that the overall costs to businesses and the travelers to date associated with this most recent closure may already exceed the total cost of improving Cottonwood Pass,” Fulton wrote.

I-70 in Glenwood Canyon was first shut down over the Fourth of July weekend after heavy rains caused destructive mudslides. The interstate was reopened, only to be shut down again on July 21 after more mudslides caused significant damage to the highway.

On Aug. 2, Gov. Jared Polis said he will issue a state disaster declaration for Glenwood Canyon. During a news conference, Polis said it could be “a few days to a few weeks” before I-70 reopens.

For the latest road conditions go to COTrip.org. LL