The next stop for OOIDA’s tour trailer is near the urban neighborhood called South Baltimore.

Marty Ellis, skipper of OOIDA’s tour trailer, plans to park the Spirit of the American Trucker at the Baltimore South TA Tuesday through Thursday, May 25-27. It is at the I-95 junction with Route 175. That is the Jessup exit, Exit 41A.

The Baltimore South TA has parking for 436 tractor-trailers. The Country Pride restaurant dining room is open for business.

The Baltimore South TA in close to the neighborhood of South Baltimore, which – being right off I-95 – is often the first Baltimore experience of the metro area for visitors. It is home to the city’s top attraction, Fort McHenry, where the Battle of Baltimore in 1814 inspired Francis Scott Key to write the words of what became the U.S. national anthem. That’s about 5 miles from the South Baltimore TA on the other side of the Patapsco River.

South Baltimore also has the stadiums for both the Major League Baseball team Orioles and the National Football League Ravens. Both are only a few miles away from the TA Travel Center.

Questions on per diem

One driver stopped at The Spirit at the previous stop in Bordentown, N.J., to discuss federal legislation to restore employee drivers’ ability to deduct 80% of up to $63 in daily expenses for meals on the road.

In April, Land Line’s Senior Editor Mark Schremmer reported there were bills in the U.S. House of Representatives and the U.S. Senate that would restore that per diem deduction, which had been eliminated by the Tax Cuts and Jobs Act of 2017.

The member said he didn’t know why it shouldn’t be 100% deductible, but getting back to 80% would save some truckers thousands of dollars in tax obligations.

OOIDA has worked to educate federal lawmakers on how the per diem changes have affected truck drivers. Click here to read about a letter sent in 2019 aimed at informing congressional leaders. 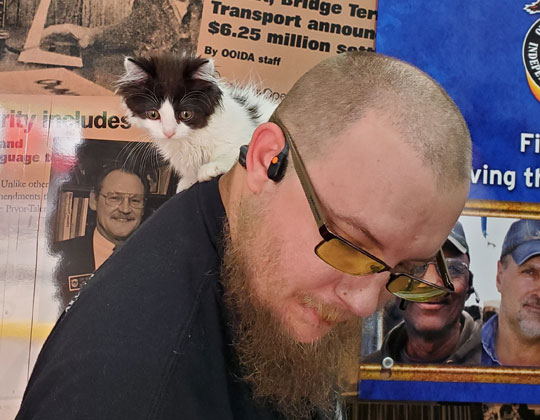 After Baltimore, The Spirit is scheduled to stop in Raphine, Va. After that, Ellis takes The Spirit to the American Truck Historical Society’s National Convention and Truck Show on June 3-5 in Harrisonburg, Va.