The Northeast is kicking off December with a lot of snow. A Nor’easter is expected to dump as much as 20 inches of snow, forcing states to implement travel restrictions.

As inclement weather is slamming the Northeast, affected states are taking appropriate measures to ensure safety on the roadways. Commercial vehicle travel restrictions are in place.

Effective since 6 a.m. on Monday, Dec. 2, the Pennsylvania Department of Transportation and the Pennsylvania Turnpike Commission have installed restrictions on certain trucks. Reduced speed limits have been implemented for other vehicles.

According to a news release, the ban also will include all double trailers, regardless of whether they are using chains.

For all vehicles allowed on the interstates, PennDOT limited speeds to 45 mph. All commercial vehicles that are not affected by the travel restrictions must move to the right lane.

On Monday afternoon, PennDOT lifted restrictions at the following locations:

Interstates 78 and 80 in the westbound direction will remain unrestricted unless conditions worsen.

WINTER STORM UPDATE: Restrictions have been lifted on a portion of I-78 & US 22 and I-476, the NE Extension of the @PA_Turnpike

The New Jersey Department of Transportation implemented its travel restrictions on Sunday, Dec. 1.

As of 10:30 a.m. local time, the commercial vehicle travel restriction was still in place.

Gov. Andrew Cuomo declared a state of emergency in Albany, Columbia, Greene, Rensselaer, Schenectady, Saratoga and Ulster counties. Approximately 300 members of the National Guard will assist with snow removal and clean-up operations, according to a news release.

No travel bans are in place as of publication time.

In Vermont, the Agency of Transportation (VTrans) has implemented a chain-up requirement on VT Route 9 Woodford-Searsburg. It remains in effect until further notice.

VT-108, also known as “The Notch,” is closed from Barnes Camp Visitor Center in Stowe to the upper parking lot at Smugglers Notch Resort on the Cambridge side.

MaineDOT reduced speed limits on Interstate 295 through the Richmond area to 45 mph. No travel bans were in place as of press time.

Meanwhile in New Hampshire, the state’s Department of Transportation has banned oversize/overweight travel for Monday, Dec. 2. Speed limits have been reduced to 45 mph on Interstate 95.

MassDOT lifted its reduced speed limits and travel restrictions on Interstate 90 Monday afternoon. Motorists should check road conditions before traveling as restrictions may again be installed depending on weather.

OK Northeast, this storm isn’t exactly “sneaky”, but it is the first major snowfall of the season for much of the urban corridor. Take it easy on those roads today if you have to be out and about!https://t.co/3Z7E9XhjxD pic.twitter.com/IcZoRQTGKJ

A storm system that brought “heavy snow and strong winds” in central U.S. is now in the Northeast, according to the National Weather Service.

“This is producing a variety of impactful winter weather conditions to begin the work week, ranging from heavy snow over interior portions of the northern Mid-Atlantic and New England, to a wintry mix closer to the Interstate 95 corridor,” the National Weather Service states in its short-range forecast.

Winter storm warnings are in effect from northeast Pennsylvania to southern Maine. Total snowfall can reach 10 to 20 inches in some portions of the affected areas by Tuesday morning. Warning are also in effect from western North Carolina to eastern West Virginia.

According to the National Weather Service, the storm will likely lead to major travel disruptions across affected areas.

The Weather Channel is reporting snow and high winds will likely impact the morning commute in eastern New England on Tuesday. Weather could impact commutes in areas down to the New York City tri-state area on Tuesday morning.

Snowfall will be mostly over by Tuesday night, according to The Weather Channel. 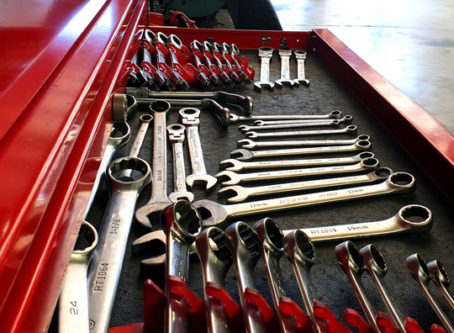 Summer prep for your truck

Winter prep for trucks usually gets the most attention. But you also need to ensure you keep your truck at top efficiency during the summer.