Eastbound traffic on Highway 22 Teton Pass in Wyoming will close to trailer traffic on Oct. 15, one month earlier than usual, according to the Wyoming Department of Transportation.

WYDOT stated in a news release that an extended closure of a runaway truck ramp with the Catchnet cable system is the reason behind the early closure for large trucks. The early trailer closure affects only eastbound traffic on Teton Pass. Assuming no inclement weather, westbound traffic will be business as usual for trailer travel. 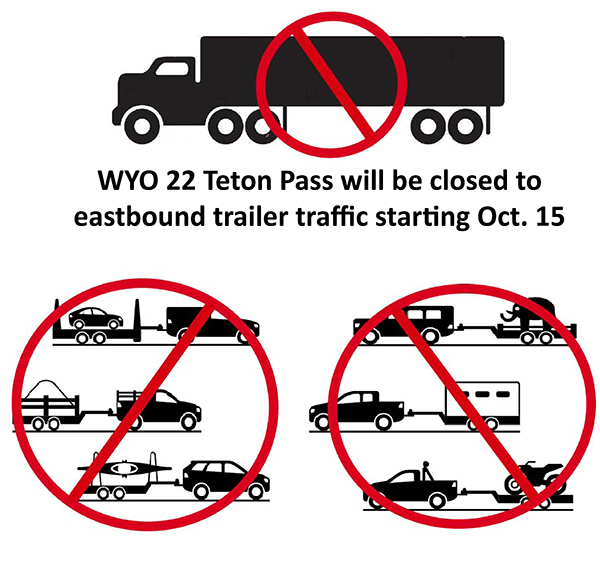 “Our concerns lie mostly with the eastbound traffic on the east side of the pass, given the steep grade, topography and accident history,” WYDOT District Engineer Keith Compton said in a statement.

Heavy trucks are not the only vehicles affected by the ban. Any vehicle with virtually any kind of trailer attached will also be prohibited.

A trailer ban on Teton Pass usually takes place from Nov. 15 through April 1. The full closure that affects both directions will go into effect during that time. However, inclement weather could potentially shut down Teton Pass to trailer traffic earlier.

WYDOT officials cited the “an extended closure of the vehicle arrestor system” as the reason for the early closure. The arrestor system is the runaway truck ramp that is sometimes referred to as the “Catchnet” system.

According to WYDOT documents, the Catchnet system works much like a jet plane being stopped on an aircraft carrier. The arrestor employs a system of cables and canisters of energy absorbing tape that expand to absorb the speed and force of the truck.

The design allows less distance to catch a vehicle and allows placement where a typical runaway ramp would not, preventing trucks from having to cross head on traffic to utilize the system, according to WYDOT.

Any vehicles with a hitched trailer illegally accessing Teton Pass will be found in violation of running a road closure and subject to fines.

WYDOT will also be installing a mobile variable message board with the closure messaging for added awareness.