On July 12 and 14, the Maryland Transportation Authority held public hearings as part of the toll rate range setting process public comment period. Tolls being discussed are for the high occupancy toll lanes for Phase 1 South: American Legion Bridge I-270 to I-370 of the multi-billion dollar Capital Beltway toll project.

According to state documents, the minimum toll rate for two-axle passenger vehicles is set for 20 cents per mile. A maximum range reaches as high as $3.76 per mile, which can cost a one-way trip up to $50. Those are just rates for E-ZPass users. A one-way trip could cost a passenger vehicle driver nearly $70. For truckers, a full Capital Beltway toll trip can cost anywhere from nearly $15 for the 12-mile trip to more than $400. 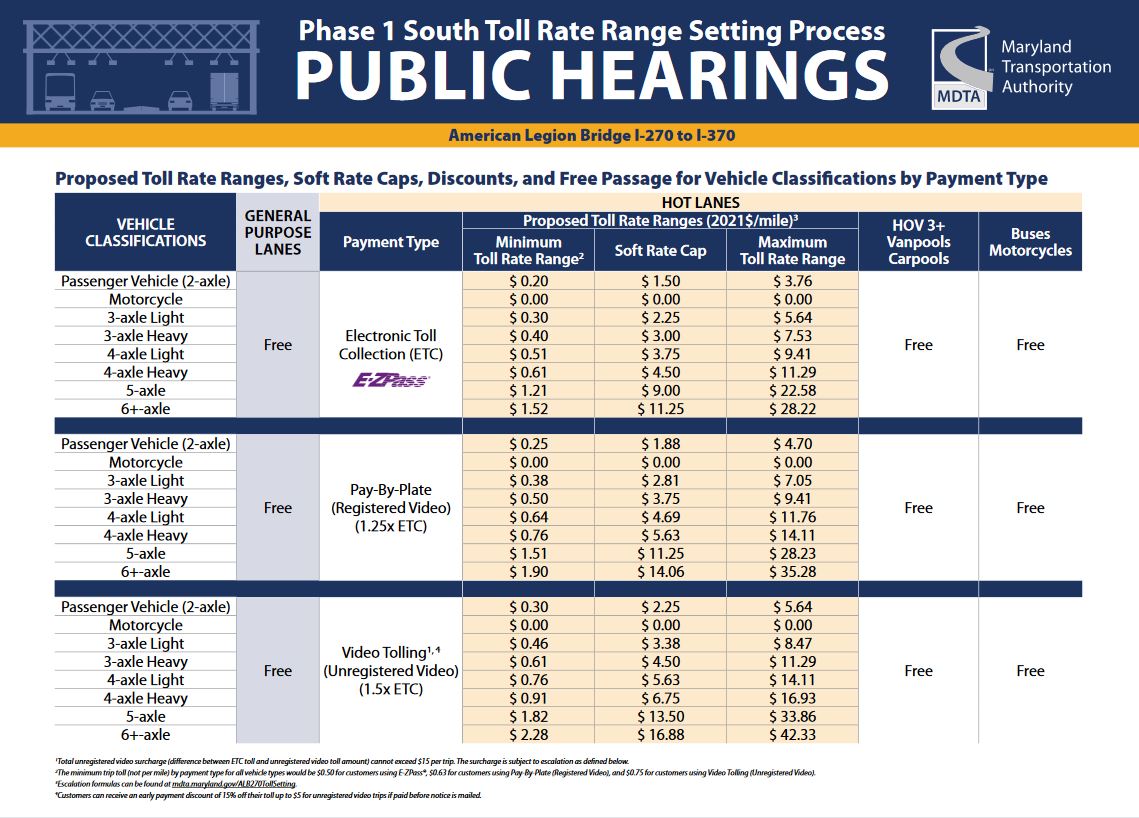 Resident Linda Rosendorf pointed out how a trip can go beyond $50. She said the Capital Beltway toll rates favor wealthy motorists while making congestion worse for the rest of motorists in the free, general-use lanes.

“Expensive toll roads are a regressive form of taxation in which middle- and low-income drivers may spend a larger percentage of their income on tolls than high-income drivers,” Rosendorf said. “Maximum toll rates should be accessible to working-class families.”

Representing the Maryland state chapter of the Sierra Club, Brian Ditzler referred to the high price a trucker could pay for a relatively short trip. He also debunked the claim that Maryland taxpayers will not foot the bill as the majority of those paying the tolls will be Maryland motorists.

Furthermore, Ditzler claimed that the private sector toll operator has an incentive to keep congestion high on general-use lanes to incentivize people to pay the high toll rate.

Ditzler argued that the high toll rates will further increase inequities for certain minority populations. Title VI of the Civil Rights Act of 1964 is guiding project details. That title provides that “no person shall, on the grounds of race, color, national origin, sex, English proficiency, or disabilities, be excluded from participation in, be denied the benefits of, or be subjected to discrimination under any program or activity.”

Maryland House Del. Al Carr mentioned the shortcomings of other Maryland toll roads, including “punitive and predatory late fees.” Carr said late fees were as high as $50 for a $1.50 trip. That fee has been lowered to $25, which Carr said is still too high.

Rockville Mayor Bridget Donnell Newton, who has been vocally against the Capital Beltway toll project, voiced more opposition. As an 11-year member of the Transportation Planning Board, including being the chair of that board, Newton said she is “a strong advocate for congestion relief for all.” However, this particular project does not get her support.

“Thank you for the opportunity to once again share the unanimous agreement of the Rockville City Council and our staff that this hearing is an example of government burying its head in the sand, refusing to turn away from 20-year-old ideas and a complete denial of climate change and social justice,” Newton said.

She also referred to comments made by Gov. Larry Hogan. In 2015, Hogan said “tolls are regressive tax hikes in disguise.” Six years later, Hogan is advocating for exactly that.

Subsequent comments during the July 12 meeting echoed those themes, with commenters mostly concerned with the high price tag.

However, the July 14 meeting took on a different tone. Five of seven commenters during the first session supported the Capital Beltway toll project, and another during the second session. Those supporters include representatives of the Maryland Transportation Builders and Materials Association, AAA Mid-Atlantic, CES Consulting (employs engineers, construction inspectors, etc.), Northern Virginia Transportation Alliance, Concrete General (contractor working with the Maryland Department of Transportation) and Nasir and Associates (a steel fabrication company).

Nearly all of those supporting the Capital Beltway toll project argue that the tolls are not high at all. In fact, many argue that the proposed toll rates are lower than toll roads in other states in the region. Another factor in common with most of the supporters is the fact they have a financial stake in the project moving forward.

The four public comment meetings came soon after MDOT Deputy Secretary R. Earl Lewis Jr. sent a letter to the transportation planning board requesting it to vote again on the Capital Beltway toll project on Interstates 495 and 270. On June 16, the board removed the project from the list of those to receive funding for an air quality conformity study in its long-term plan, Visualize 2045. Considering that study is needed for federal approval, the vote essentially puts the project on hold indefinitely.

New toll lanes are part of Gov. Larry Hogan’s Traffic Relief Plan. The project was initially estimated to cost about $9 billion, with some projections as high as $11 billion.

Hogan’s plan addresses congestion issues near the nation’s capital. At the time, it was the largest proposed public-private partnership highway project in North America. According to a news release, the statewide cost of congestion based on auto delay, truck delay, and wasted fuel and emissions was estimated at $2 billion in 2015.

Although MDOT’s Capital Beltway plan does not toll all lanes, some have criticized high occupancy toll lanes by calling them “Lexus lanes” – i.e., the idea that only higher-income earners can afford to access the quicker route. However, MDOT refutes those claims.

“The ‘Lexus-lane’ claim has been dismissed by studies based on actual user data that shows users of all income levels benefit from reduced travel times, including managed lane users and those who continue to use the general purpose or toll-free lanes,” MDOT states. “Managed lane usage is not closely correlated to income. The managed lanes that we are studying would provide more options for people needing a reliable trip time. Nationwide research shows a majority of travelers choose to use price managed lanes occasionally for critical or important trips, such as reaching an appointment or a school event.” 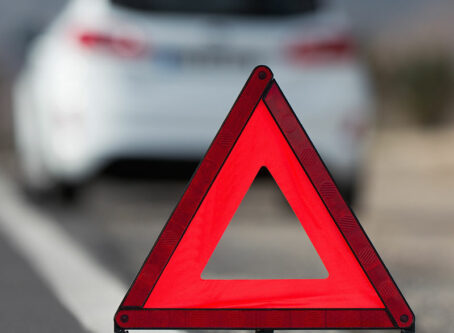