Alisal Fire in California shuts down U.S. 101 near Santa Barbara

A rapidly growing wildfire in Southern California has jumped the 101 highway, forcing its closure in the area in both directions.

On Monday, Oct. 11, a brush fire broke out near the Alisal Resevoir about 20 miles west of Santa Barbara. Strong winds pushed what would be called the Alisal Fire south, eventually crossing over the 101 highway to Tajiguas Beach.

According to the California Department of Transportation, U.S.  101 has been shut down in both directions since Monday from state Highway 1 at Las Cruces to Winchester Canyon/Cathedral Oaks Road in Goleta. As of Wednesday morning, that closure remains. Additionally, Pacific Railroad and Amtrak lines are temporarily out of service from Gaviota to Goleta.

Motorists should use Interstate 5 as an alternate route, according to the California Highway Patrol in Santa Barbara.

State Route 154 is also available as an alternate route around the Alisal Fire.

Although state Route 154 is shorter, Caltrans shows major congestion on the highway. Transportation officials do not know when U.S. 101 will reopen. For the latest traffic information, including closures, go to Caltran’s QuickMap. 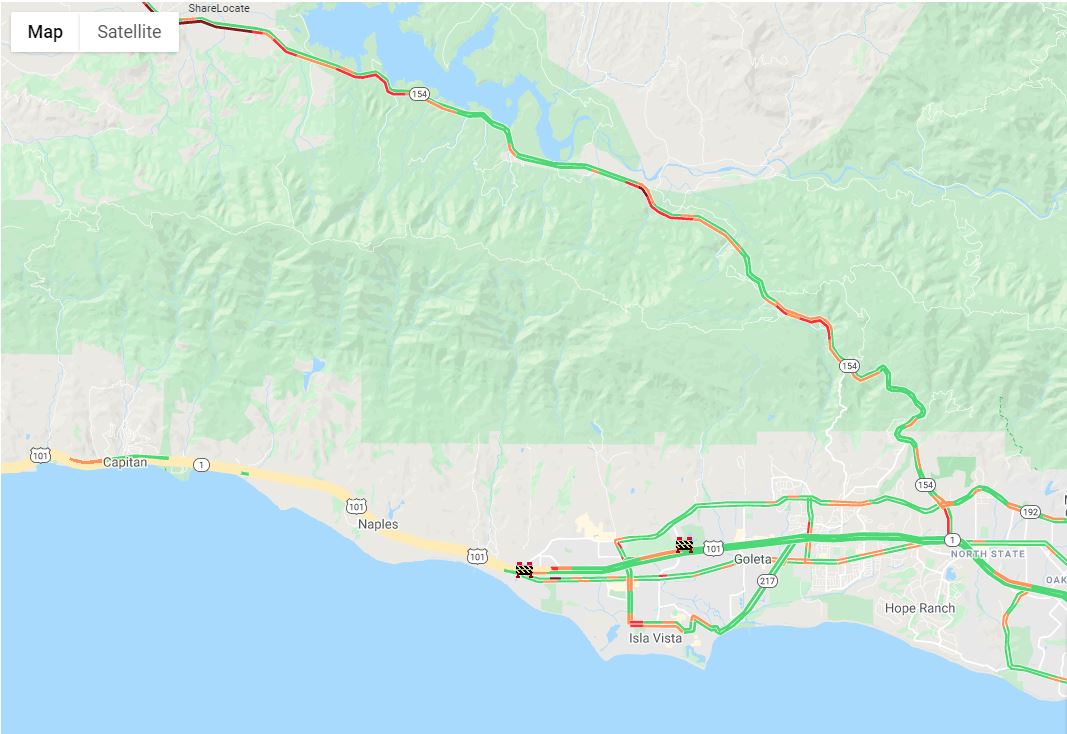 The above screenshot of Caltran’s QuickMap taken at 8:30 a.m. PDT shows the U.S. 101 closure and congestion on the Highway 154 detour.

The Alisal Fire started on Monday afternoon at approximate 2 p.m. By Tuesday, the fire grew to more than 13,000 acres, reaching about 20 miles northwest of Santa Barbara. On Wednesday, the wildfire remains at around 13,000 acres with only 5% containment. As of publication, the cause of the firewas unknown.

On Tuesday, Santa Barbara County officials declaireda local emergency due to the Alisal Fire. Fire officials expect significant growth over the next 12 hours and continued growth for the next 24 hours. LL