Truck cross-border freight dipped in July, still way up from a year ago

Despite declining from an all-time high in June, July still raked in the highest value of cross-border freight for that month on record, although truck freight took a monthly hit.

Compared to July 2020, cross-border freight rose by more than 22% after a 41% increase in June and a 94% increase in May, according to the Bureau of Transportation Statistics. May’s year-to-year increase was the largest by percentage since the U.S. Department of Transportation began compiling numbers in 1993. Conversely, last May North American freight dropped by nearly 49%. That was the largest annual decrease on record.

The value of freight hauled across national borders decreased by 4% compared with June, when cross-border freight went up by nearly 7% compared with the previous month. In the past 20 years, cross-border freight in July has decreased 18 times when compared to the previous month. Freight rose last year as the country recovered from pandemic-induced shutdowns and in 2009 when the nation was beginning to rebound from the Great Recession.

Like nearly every other mode, trucking cross-border freight in July was down.

Trucks carried nearly $69 billion of the more than $111 billion of imports and exports in July, a 5% decrease from June. Compared to a year ago, truck freight was up 13%.

Month-to-month, Canada truck freight decreased by more than 8%, whereas Mexico truck freight went down by 2.5%. Top truck commodities were computer-related machinery/parts (down 3%), electrical machinery/equipment and parts (up 0.5%), vehicles other than railway (down 10%), plastics/articles (down 3%) and measuring/testing instruments (down 5%).

July’s cross-border freight total of more than $111 billion is down by nearly $5 billion from the previous month, but it increased significantly by more than $20 billion from July 2020. June’s total value of nearly $116 set a new record high for North American freight by value, previously set in March at nearly $115 billion, indicating a return to a pre-pandemic economy.

All modes except vessel experienced a month-to-month decrease. Trucking freight and airfreight suffered the biggest loss with a 5% decrease each. However, vessel freight increased by more than 3%.

Nearly 54% of U.S.-Canada July cross-border freight was moved by trucks, followed by rail at more than 16%. Of the nearly $56 billion of freight moving in and out of Mexico, trucks carried nearly 70% of the loads. LL

Rising prices continue to be the norm, according to the weekly diesel report from the Energy Information Administration released Oct. 18.

A bill package advancing in the Michigan Senate is intended to maximize funding for local roads by trimming federal aid costs.

Anyone who thought Pennsylvania does not have enough toll roads is in luck. The Southern Beltway turnpike extension is now open to traffic. 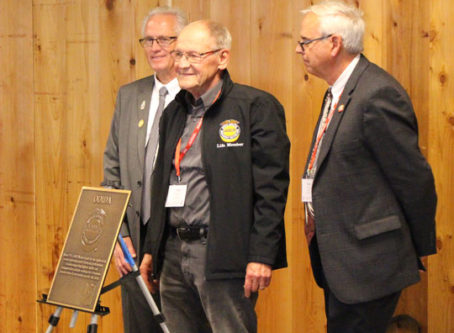 OOIDA was among the inaugural inductees into the newly-formed American Trucking and Industry Leader Hall of Fame on Oct. 15.