Are states enacting enough highway safety measures to save lives? According to Advocates for Highway and Auto Safety, nearly 400 state laws need to be adopted for optimal safety.

On Jan. 23, Advocates for Highway and Auto Safety released its 17th annual roadmap of state highway safety laws. The report ranks all 50 states and the District of Columbia on the passage of 16 laws the group believes save lives.

Accounting for the missing laws in all states and D.C., Advocates for Highway and Auto Safety claim nearly 400 laws need to be enacted nationwide. According to the report, Rhode Island has enacted the most with 13 of the recommended laws passed. South Dakota has enacted only two, the fewest in the nation.

States were divided into three categories based on the number of laws enacted. According to Advocates, green states are significantly advanced toward adopting all of its recommended optimal laws, while yellow states need improvement because of gaps in the recommended laws. Red states fall far behind in adoption of recommended laws, Advocates said.

Not a single state has enacted all 16 laws.

Only seven states and D.C. received a green rating: 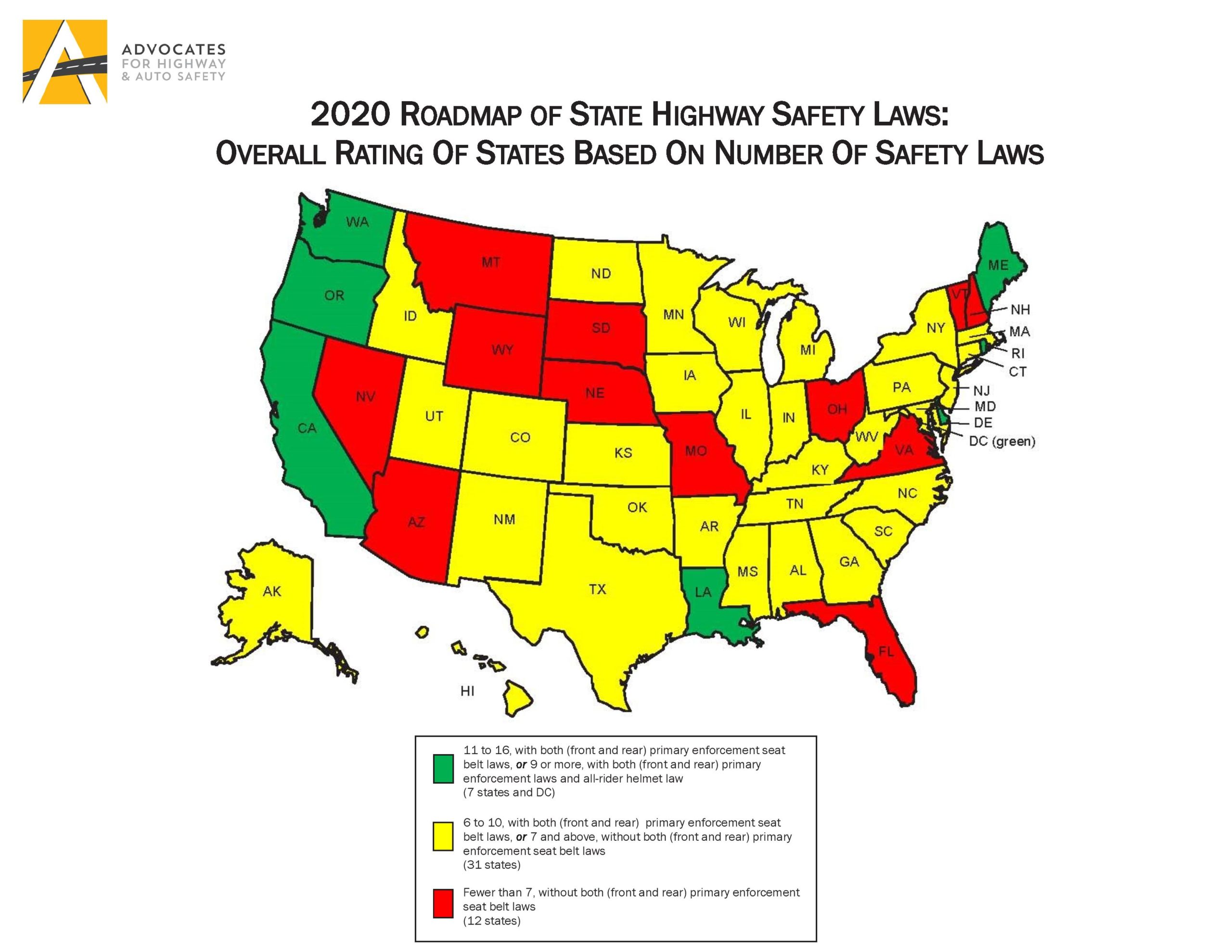 Although fatalities are low in California, Washington and Rhode Island, only Hawaii was ranked as a worse state to drive in, according to a recent WalletHub report. None of the green states were ranked in the top 10 best states in which to drive.

On the other end, 12 states received a red rating for a lack of laws:

According to that same WalletHub report, Nebraska and Virginia are among the top 10 best states to drive in.

One of the least popular recommended laws is the minimum age of 18 requirement for an unrestricted driver’s license. Only Arkansas and New Jersey have adopted such a rule. Of the nearly 400 laws needed to be enacted, nearly half deal with graduated driver licensing for teen drivers.

Most states are in good standing when it comes to impaired driving. Only Iowa and Maine do not have a child endangerment protection. Distracted driving laws have also gained wide acceptance nationwide. Only two states, Missouri and Montana, have yet to adopt an all-driver text messaging restriction. Nebraska, Ohio and South Dakota are the only states with distracted driving laws only for secondary enforcement.

In submitted comments, OOIDA expresses concerns about AV 4.0, the federal autonomous vehicle guidance, including lack of data and removing drivers too soon.