Rep. Brian Babin, R-Texas, introduced a bill on Wednesday, April 10 that would extend Interstate 14 to additional areas in Texas and along the Gulf Coast. Known as the “Forts to Ports” bill, it would connect military installations to seaports.

“I-14 is already known as the Forts to Ports highway, and our goal is to build upon that success with further improvements, including a nonstop interstate connection from Goodfellow Air Force Base in West Texas to the strategic seaport in Beaumont,” Babin said in a news release. “I-14 will finally give countless communities access to the benefits on an interstate highway with a design and implementation process run by state and local transportation authorities, not Washington bureaucrats.”

HR2220 builds upon legislation written by Babin in the 2015 FAST Act highway bill. The bill would authorize most of the new interstate route using the general pattern of existing roads and highways, while leaving the final determination about the exact path to state and local officials.

“As our economy continues to grow, it’s critical that we continue building the infrastructure needed to support it,” said Rep. Mike Conaway, R-Texas, one of the bill’s co-sponsors. “The I-14 expansion through San Angelo to Midland provides a safer route for travelers in the area and directly connects the Permian Basin – the top oil and gas producing region in the world – with one of the largest ports in the country.”

The Forts to Ports bill aims to connect Goodfellow Air Force Base with Fort Hood, Fort Bliss and seaports on the Gulf Coast. 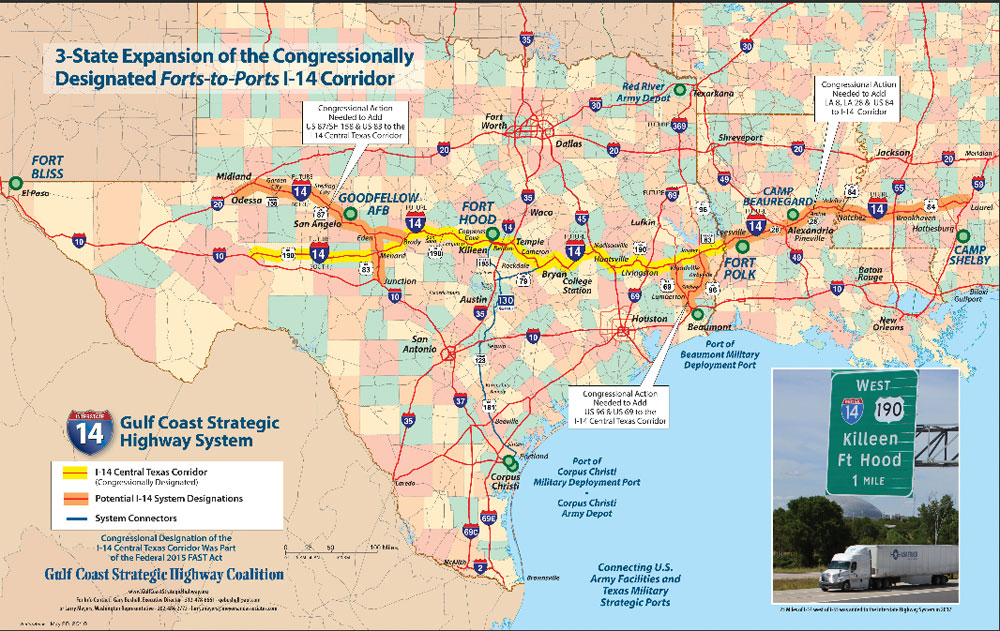