A guy goes into the doctor’s office because of a shooting pain in his arm.

The patient tells the doctor, “Every time I move my arm like this, it hurts. What do you recommend?”

The doctor replies, “Don’t move your arm like that.”

As far as jokes go, it’s an oldie but a goodie.

However, it’s probably not the solution you want to hear from your doctor. Rather than determining the root cause, the doctor is looking for the easy way out so that he can likely hit the golf course that afternoon.

In a way, the doctor’s solution is similar to how the American Trucking Associations and numerous members of Congress want to treat the driver retention problem in the trucking industry.

Instead of digging in and correcting the problems that lead truckers to exit the driver’s seat and move to another career, they continue to search for ways to find new drivers to replace the ones who just left.

Last week, about 60 members of Congress wrote a letter to the U.S. Labor Department asking it to prioritize grants for unemployed Americans to be trained as truck drivers. The bipartisan letter signed by Rep. David Scott, D-Ga., and others said the measure was necessary as trucking companies struggle to retain drivers.

“With turnover rates for large, long-haul truckers reaching the 90% mark and the lag time for training and onboarding new drivers lasting several months, it is critically important DOL enact these measures as soon as possible,” the letter stated.

This solution, along with ATA’s push to allow 18-year-olds to drive interstate, does absolutely nothing to address the reasons that large carriers have a turnover rate of 90% or more. It does nothing to address insufficient compensation or poor working conditions that lead a person to attain a commercial driver’s license and then walk away from the industry a few months later.

The Owner-Operator Independent Drivers Association has been shouting for years that there is not a driver shortage and that the way to retain drivers is to compensate them for all of their time and to make it a more enticing long-term career.

If anything good has come out of the current supply chain crisis, it’s that the mainstream media is finally starting to catch on to what OOIDA has been saying for years. Recent articles from Time, Business Insider, and Quartz have all called into question ATA’s claims that there is a shortage of truck drivers.

And just last week, OOIDA President Todd Spencer made some extremely candid remarks during an interview with MarketWatch.

Spencer said the fast-tracked training grants for new truck drivers will not be successful if steps aren’t made to make it a more attractive career path.

“The reality is, if the job you’re offering sucks, is the solution really to go find more suckers, or should you improve the job so people will come and stay?” Spencer said.

Transportation Secretary Pete Buttigieg previously said the same thing in a more politically correct way. He compared the industry’s driver retention problem to a leaky bucket, meaning that adding more water won’t help as long as the holes in the bottom of the bucket remain.

If the trucking industry really wants to solve the problem, there are plenty of things that can be done.

Pay drivers for all of their time. Eliminate the overtime exemption. Provide safe places for drivers to park. Remove burdensome regulations that do nothing to improve safety.

Because, eventually, you’re going to need to move your arm like that. And, eventually, trucking companies will again be looking for a new wave of drivers unless they give their existing drivers a reason to stay. LL

Do we really need a mandate for automatic emergency braking?

We’re on the road to requiring automated emergency braking systems on trucks. But AEB has a downside that needs to be carefully considered.

Proponents of the “induced demand” theory say building more lanes increases traffic. But they’re focusing on commuters instead of truckers. 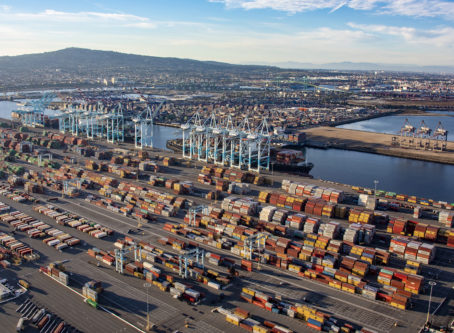 This port driver gets the ‘shipping crisis’

The shipping crisis at U.S. ports isn’t because of a driver shortage, and it’s nice to see this experienced driver explain what’s going on.