There has been a lot of speculation regarding when Level 4 and 5 autonomous vehicles will hit the markets. However, an MIT study suggests it will be at least a decade. Meanwhile, a study from AAA reveals current Level 2 technology still needs a lot of work.

Fully automated vehicles many years down the road

Recently, researchers at MIT published a study that looks into autonomous vehicle mobility, employment and policy. The research found that self-driving vehicles will happen later than sooner.

Despite optimism from several stakeholders, including Google and Tesla, that fully automated vehicles will be available soon, MIT researchers believe it may be at least another decade before that becomes a reality. Even then, self-driving cars may be limited to urban and suburban areas in warmer climates. Winter climates and rural areas will experience longer transitions, according to the study.

One study projects employment changes under the assumption all driving becomes fully automated by 2050. However, the MIT study states “this is extremely unlikely to occur.”

“Current best estimates show a slow shift toward Level 4 systems even in trucking, one of the easier use cases, with only limited use by 2030,” the study states. “Overall shifts in other modalities, including fleets and passenger cars, are likely to be no faster, and so disruption to taxi, rideshare, and bus driver jobs is likely to be limited in the near term.”

It is also likely that fully automated vehicles will roll out in piecemeal fashion in specific categories of transportation. The idea that all Americans will have initial access to self-driving cars at the same time is unlikely. More highly populated and well-funded areas will likely have the needed infrastructure first.

Specific to trucking, the MIT study suggests that automation could hit the long-haul trucking industry first since it deals primarily with highway driving, which reduces the need for complex programming needed to navigate busy urban roadways.

Platooning will likely be the first high-level automation in the trucking industry. However, platooning still requires the full attention of a human driver.

How long before a trucker can sleep in the cab while the truck is in motion? No time soon, according to the study.

“It may, indeed, take many years before we see a sufficiently reliable automated system that enables a truck driver to sleep soundly, alone in the cabin for an extended journey, without some sort of remote backup supervision for the autonomous system,” researchers state. “As one comparison, we have not yet achieved this kind of automation in cargo or passenger aircraft, despite their operating in a simpler environment.”

Regarding employment, the transition to automated vehicles “will not be jobless,” MIT researchers state. Although new job opportunities will pop up, it is uncertain what the quality of the jobs will be.

There could be unintended consequences as well. The study suggests the possibility of increased vehicle miles traveled once fully automated vehicles become commonplace. Increases in vehicle miles traveled could go beyond the estimated 10% per decade increase due to population and income growth. In theory, the ease of vehicle travel with self-driving cars may incentivize people to use their vehicles more.

On Aug. 6, AAA released a study that evaluates four newer cars with Level 2 active driving assistance systems, dubbed ADAS. This includes technology that assist drivers in vehicle acceleration, braking and steering. According to the study, vehicles with ADAS experienced some type of issue every 8 miles over the course of 4,000 miles of real-world driving.

In some instances, vehicles with ADAS cannot stay in their own lane. In other situations, these vehicles approach too close to other vehicles or guardrails. Issues also were found with the ADAS shutting down completely. The study reveals that the system would often disengage, instantaneously giving control back to the driver with little notice. As more people become more dependent or confident in the technology, a sudden shut down of the system can become a dangerous situation, the report states.

Despite working as advertised in closed-course conditions, the efficiency of ADAS diminishes in real-world scenarios.

Nearly 75% of the errors dealt with lane departure or erratic lane position. However, closed-course driving was not without its issues. When approaching a simulated disabled vehicles, a collision occurred two-thirds of the time, with an average impact speed of 25 mph. 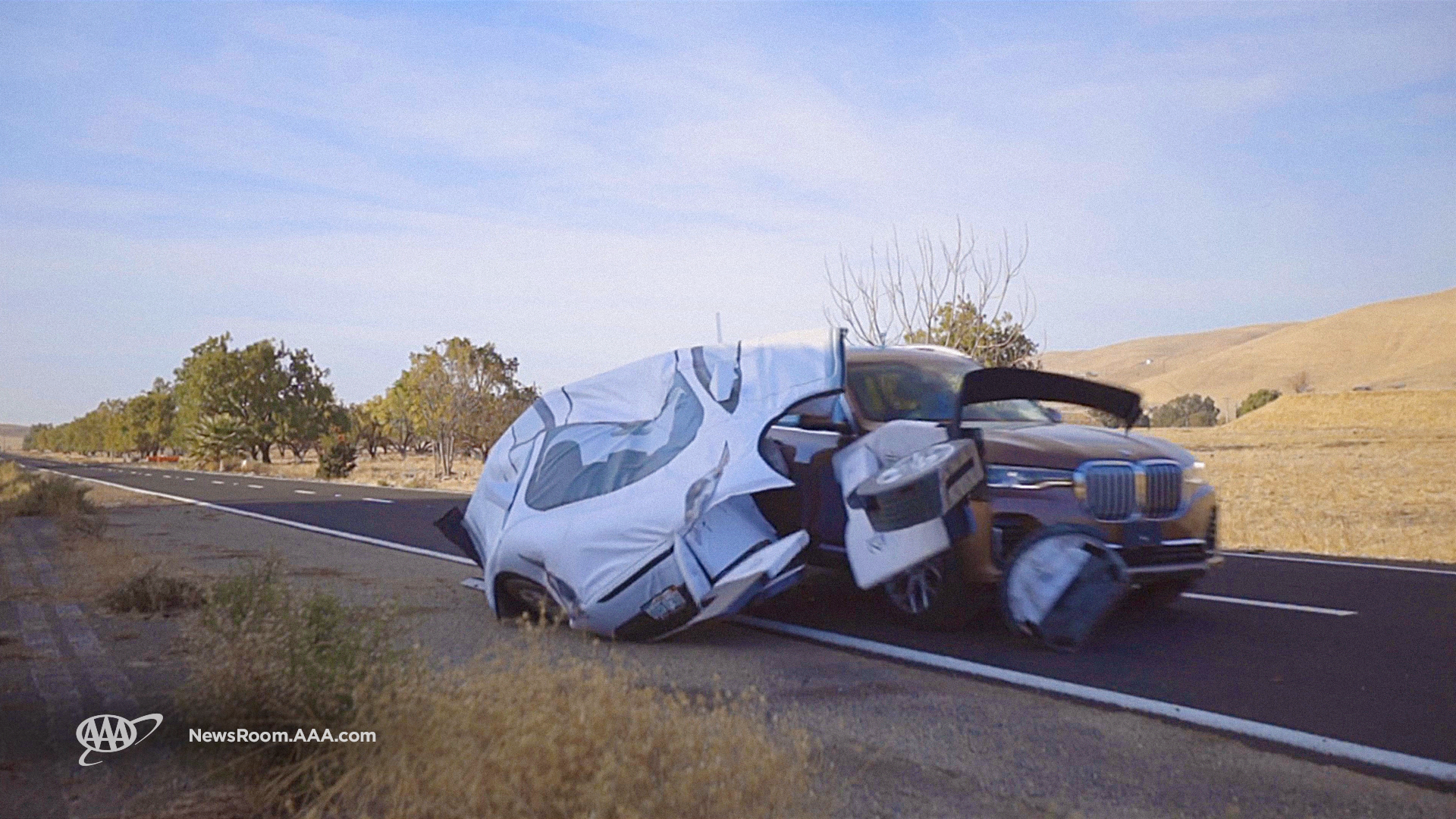 A test vehicle equipped with ADAS collides with a simulated disabled vehicles. (Photo courtesy of AAA)

AAA recommends manufacturers increase the scope of testing for ADAS and limit their rollout until functionality improves to provide a more consistent and safer driver experience, stating the technology is “far from 100% reliable.”

“Active driving assistance systems are designed to assist the driver and help make the roads safer, but the fact is, these systems are in the early stages of their development,” Greg Brannon, AAA’s director of automotive engineering and industry relations, said in a statement. “With the number of issues we experienced in testing, it is unclear how these systems enhance the driving experience in their current form. In the long run, a bad experience with current technology may set back public acceptance of more fully automated vehicles in the future.”

In 2018, the Insurance Institute for Highway Safety conducted a similar study evaluating the ADAS in five different cars. The study revealed that some Level 2 autonomous vehicles failed to stop for stationary objects, failed to stay in lanes, or experienced safety issues in other ways.

During the Federal Motor Carrier Safety Administration’s 2020 Truck Safety Summit, three stakeholders discussed ADAS within the trucking industry. Although the discussion favored the technology, there were plenty of words of caution.

However, all three panelists emphasized one important element of safety technology: the driver.

Several of Huang’s comments support the AAA ADAS study. Although Daimler Trucks has in-house AEB systems and launched the first Level 2 truck in North America, he still acknowledged that the technology is not perfect. ADAS technology is still in the early stages and needs “refinement,” Huang said during the summit.

Furthermore, Huang said the technology needs to practically functional and functional in the real world, the latter of which appears not to be the case, according to the AAA study. Huang also said that expectations need to be lowered. Specifically, ADAS are intervention technologies to be used in the event there is a lapse in driver attention. However, safety ultimately wraps back around to the capabilities of the driver.