As the nation grapples with civil unrest in the wake of George Floyd’s death, truckers are grappling with safety concerns.

It was a topic of conversation for members of the OOIDA Board of Directors, launched by Johanne Couture, a truck driver from Canada. When the protests were in full swing around the country, she decided to stay on her side of the border and then started a conversation about trusting your instincts, planning ahead and supporting other drivers.

“People do really odd things when they’re scared, so my whole reason for not crossing the border at that point was that I didn’t want to get to the scared point. I didn’t want to be in that position, so I just decided, nope, I’ll just stay on my own side,” she said.

Couture will be the first to admit that the video coming out of Minneapolis in late May and early June shook her.

First, it was that video of George Floyd’s breath – and then his life – being taken from him. Then the video of the protests that enveloped the city – and then the nation, including the one that every trucker has seen by now – the video of Bogdan Vechirko, encountering protesters ahead of the closure of I-35.

Couture routinely makes the trip across the border from her native Canada into the U.S. for deliveries – but not during the time of the protests.

Couture called her manager and told him she wouldn’t be crossing the border for a while – and he understood. She wanted to make clear that she understands the anger, the frustration and the fear protesters feel.

But she wanted people to know that she was also fearful – and wondered if others felt the same.

So she sent out an email to other OOIDA board members, telling her story, explaining her decision to stay out of the U.S.

Her motive? To get the perspective from other people that were in the U.S. traveling through different states. She wanted to see what they were feeling like and if her feeling was just the “scaredy-cat Canadian” or if the same feeling was prevalent through the rest of the group.

Couture punctuated her email with a simple question, one that her loved ones had been asking her since they saw the video of the truck on I-35: “Are you OK?”

As the replies came in, one-by-one, confirming everyone was OK, it became clear that the situation in Minneapolis – and the protests across the country were on drivers’ minds.

And, Johanne found out she wasn’t alone.

“When I saw it, I said good for her for making that decision to protect her own safety,” Carl Smith said. “And at the same time I thought, gee, that’s really sad she has to make that decision to not be able to operate just because of the severe threat and fear that she could be vulnerable to some sort of vandalism or attack, so I had mixed feelings about it.”

Like Couture and the driver in Minneapolis, Smith drives a tanker.

He knows that comes with some risk, and that was what was rolling through his mind when he saw the video of Vechirko encountering the protest.

“When I first saw it, I said hopefully they weren’t opening fire on it because that was a fuel tanker. I pull a chemical tanker, but the general public, when they see a shiny tank, they always think it’s holding gasoline. They never think it could be holding milk or some type of liquid sugar. They always think gasoline,” he said. “But Johanne and I both do the same thing, we pull chemical tankers, and we haul hazardous materials, so we’re kind of a high profile target for anyone who’d want to do harm to a truck if they really had a mind to do so.”

Part of Couture’s decision came down to that uncertainty. She said no one knows how they’re going to react until they’re in a particular situation, especially one you could never predict.

While Couture made the decision to stay on the north side of the border, others were making decisions to change the way they run.

Smith included. He’s been looking ahead for potential trouble spots and planning accordingly. As the protests raged on through the end of May and into June, other potential traffic disruptions were popping up.

“They were going to shut I-94/I-80 down for a period of time, so they said we either have to shelter in place until it’s over or find an alternate route – so I took the option of taking an alternate route. It took me probably 30 miles out of my regular route, but rather than try to contend with all the activity in the Gary, Ind., area, I thought that was the wise move,” he said.

Just as Smith listened to his instincts, so too did OOIDA Board Member Linda Allen.

On the same night that four St. Louis police officers were shot on June 1 – Allen was approaching the city with a load. She had no idea what was up ahead, but her instincts were talking – and she chose to listen to them.

“I’ve been cutting through the woods a bit to go around cities. Coming up on St. Louis and I just had a feeling in my gut that I just didn’t want to go through the city. My husband and I are running team, and I end up saying, ‘Look we just need to pull over,’ and he said, ‘Our load will be late.’ And I said, you know what, I don’t care. It’s better to be late and safe than sorry and dead,” Allen said. “We end up pulling in to a truck stop about 30 miles from St. Louis, and we would’ve been going through St. Louis right at the time those officers were shot – and protesters were closing down the freeway. So we definitely made the right decision, and we just didn’t know. Just had this feeling that we just needed to stop.”

As of press time, all four of the police officers who were shot were expected to recover.

Allen dropped her last load later in the week and shut down for a few days while she assessed the situation because that’s what her gut told her to do.

“If something’s pulling at you that strong – the company that I run is called Hard Core Trucking, and we kinda tout ourselves as delivering no matter what. We don’t care. We’re like the postman. We don’t care if it’s raining, snowing – all that kind of jazz. We deliver on time,” Allen said. “This is the first time in 10 years that we have called and said, ‘Look we are not going to be able to get this load on time’ – literally the first time in 10 years.”

OOIDA Board Member John Koglman hasn’t been affected by the recent protests because he hauls locally, but he’s no stranger to unrest. He has been driving since the late ’60s. He’s also a retired police officer.

In both lives, he’s been through riots in Detroit and Cleveland – and was hauling out to Los Angeles in the spring of ’92 during the unrest there.

His sound advice for avoiding trouble comes from years of experience.

“What I would do and what I suggested was that, if you know where you’re going and the route takes you through an area that’s being assaulted, go around it. Find another route and just go on your own,” Koglman said. “What I first thought of was the people that have to run by the ELDs and their times and their routes. They have no freedom to – I mean, I’ve gone 30-40 miles out of the way to avoid problems – and of course it costs me money, but money is cheap compared to getting injured or having your truck wrecked or whatever.”

“I wish them well – all the guys safety and you just have to be prepared – and I don’t mean be prepared with a weapon. You’ve got to be prepared mentally if you’re going into an area or around an area and like the Boy Scouts said: Be prepared,” he said.

The nature of protests doesn’t quite lend itself to predictability.

For that reason, Koglman also suggests calling ahead to your destination to get a sense of what’s happening there – a sentiment echoed by Couture.

“No. 1, follow your gut. If it doesn’t feel right, turn around. Get out of there. You don’t need to be there. Don’t be pushed, bullied and intimidated by somebody sitting in an office. You’re the captain of the ship … stay aware of what’s going on in the direction you’re heading,” she said. “Call the customer you’re heading to, say you want to speak to the person sitting in the office at the location you’re going to, not the 1-800 customer service line. Just be fully aware of whether there’s anything going on between here and there. Be aware. Watch your six.”

As Carl Smith said, he’s listening to his instincts as he travels the country, but admits he’s doing it with a heavy heart.

“In terms of being affected on how I live my everyday life and operate my business, not so much. But internally, it’s hurt me deeply because I’m a black man, and I feel the pain and the criticism and the racism almost daily in the life that I live,” Smith said.

“I really, really feel for all those who are protesting right now. I have not been out there with them but would not hesitate if given the opportunity to let my voice be heard as well as to the injustice, but I don’t know that that’s really going to inspire change. It really has to start – if you really want my opinion, it has to start at home. It has to start when we’re little children. No child is born a racist. Not one. It’s a learned behavior, and if parents are not bringing their children up to learn how to love and to learn how to respect and learn how to include, by the time we grow into young adults and adulthood as parents ourselves, it’s really difficult to make that change.

“So I guess what I’m saying is, I don’t have the answer on how you change people once they have that mindset, they’re adults and set in their ways – but I know how we can start. We can start with these little children. Bringing them up in a way they should be brought up and teaching them to love everybody – not just those that look and act and live where they do.” LL

Editor’s note: Bogdan Vechirko was initially arrested on assault charges on May 31. He was released on June 2. Minnesota Department of Public Safety Commissioner John Harrington said in a news conference that the highway had been ordered closed after the demonstrators moved onto it, but Vechirko got onto the highway before officials were able to shut it down.

Harrington said Vechirko was speeding when he went onto the highway and he panicked when he saw the crowd in front of him. The driver slammed on his brakes when a woman on a bicycle rode out in front of his truck and was able to stop in time. Harrington said there is no information to indicate what Vechirko did was intentional.

Additionally, Vechirko has requested that authorities not charge the protesters who pulled him from his truck and assaulted him. As of press time, the investigation into the incident was ongoing. 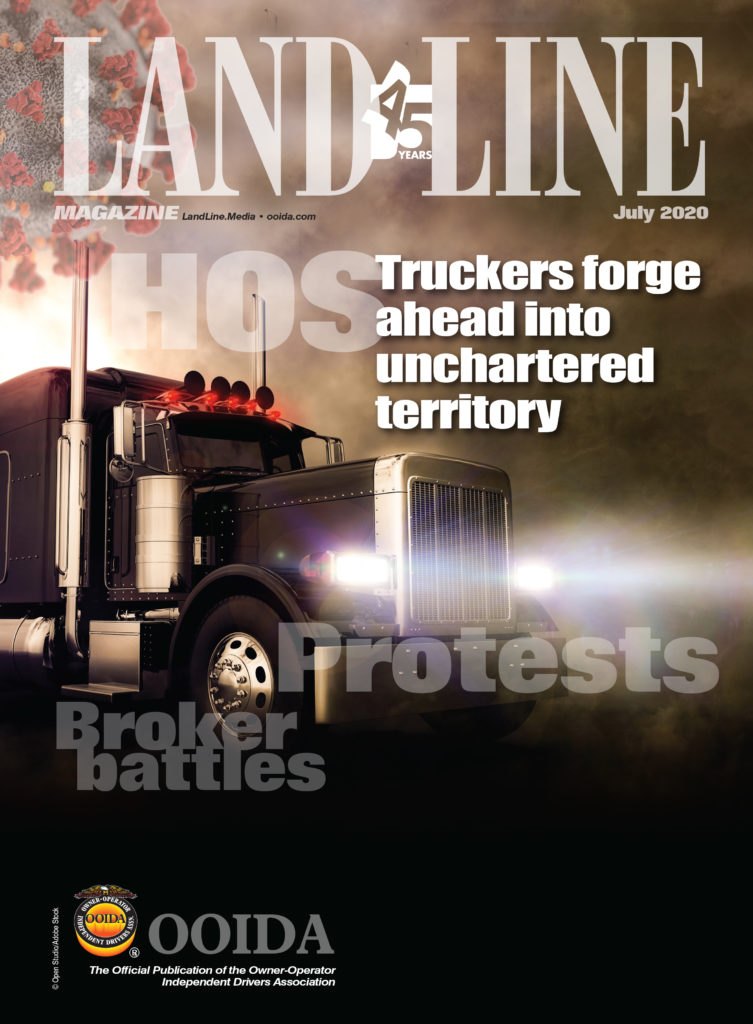