An association for tank trailer haulers requested an exemption allowing an extra pulsating brake light on the back of tankers that was granted for one company be expanded to all.

The Federal Motor Carrier Safety Administration has granted the request. The decision is expected to be published tomorrow in the Federal Register.

The National Tank Truck Carriers Inc. was granted a five-year exemption to allow motor carriers operating tank trailers to install a red or amber brake-activated pulsating lamp on the back of a tank trailer in addition to the steady-burning brake lamps required by the Federal Motor Carrier Safety Regulations. The pulsating lamp would be positioned in the upper center position or in an upper dual outboard position on the rear of the trailers.

National Tank Truck Carriers is an association of over 200 tank truck companies, according to an FMCSA notice. Most of its members specialize in bulk transportation of hazardous products, such as petroleum products, chemicals, gases, and hazardous wastes.

This exemption request comes after one of the association’s members, Enid, Okla.-based Groendyke Transport Inc., was granted a similar exemption in April 2019.

Groendyke collected data on trucks with and without the extra pulsating brake lights. It then submitted the results in its exemption request. The data showed 33.7% fewer rear-end collisions for the trucks with the lights compared to the others.

“Including a pulsating brake lamp on a lead vehicle has quantifiable effect on the drivers of following vehicles and measurably reduces rear-end collisions,” the tanker association said in its exemption request. “Drivers are redirected and altered faster and more efficiently when a pulsating brake lamp draws their attention to the lead vehicle. As a result, rear-end collisions can be prevented or at least reduced.”

The exemption requested by National Tank Truck Carriers would apply to all motor carriers operating tank trailers. It will end Oct. 8, 2025.

Support for the exemption

Twenty-four individuals commented in support of the exemption request. One individual opposed it.

In a news release, FMCSA said it had conducted research into other rear warning systems for tank trailers that would work whether or not the brakes were applied if a vehicle came too close. The agency decided the cost of those systems was too expensive. LL 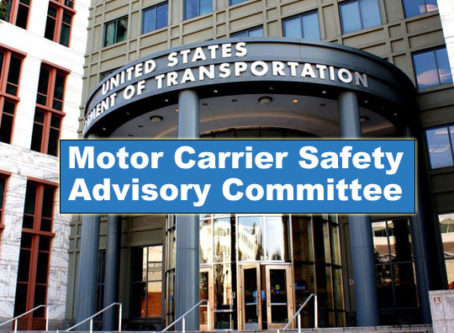 MCSAC nominations to be accepted through Nov. 30

The FMCSA wants nominations for people interested in serving on its Motor Carrier Safety Advisory Committee. The deadline is Nov. 28.

TSA announced that it has extended an exemption from the renewal of hazardous material endorsements through the end of the year.