A Georgia jury has awarded a man $20 million after a crash involving a pickup truck and a tractor-trailer resulted in the man losing a leg. The man was assisting the trucker off the premises and onto the highway.

On May 10, a jury for the superior court of Whitfield County, Ga., awarded Donald Monroe $20 million and his wife Rhonda Monroe $1.6 million for a crash it says Chattanooga, Tenn.-based Lane’s Equipment Rental and one of its drivers are responsible for.

The case stems from an incident that occurred on Feb. 3, 2016. At the time, Donald Monroe worked for Dalton, Ga.-based All South Metals. Monroe’s job that day was to load scrap metal onto a tractor-trailer owned by Lane’s and driven by Daniel McGuffee.

After loading the truck, Monroe acted as a “spotter” to assist McGuffee off the premises and into the roadway. Essentially, Monroe was to stop traffic so McGuffee could exit the premises.

According to the lawsuit, McGuffee, without any warning or notice, began to exit All South Metals by turning left onto southbound South Dixie Highway. This move was made without the assistance of Monroe.

While McGuffee’s truck was blocking the highway, Greefus Patterson was driving his red Ford pickup truck on South Dixie Highway northbound. Attempting to avoid a collision, Patterson hit the brakes and veered right off the roadway. Patterson’s truck struck a dumpster and several metal bins before striking Monroe, who was standing nearby. Monroe had to get his left leg amputated below the knee in addition to six fractures in his right leg requiring a metal rod implant and a broken clavicle.

After an investigation, Georgia State Patrol cited McGuffee for failure to yield while entering a roadway. Patterson was also cited for failure to exercise due care in the operation of his vehicle.

The lawsuit named Lane’s, McGuffee and Patterson as defendants. Blame on Patterson was argued by pointing out that he failed to “sound a signal of warning,” such as honking the horn, to alert Monroe.

Lane’s has a different version of the story. Attorneys for the company claim that Monroe did in fact walk to the middle of the road and assisted McGuffee. It was through Monroe’s assistance that McGuffee entered the highway and completed the left-hand turn without blocking the northbound lane.

Furthermore, Lane’s alleges that after the turn was completed Patterson approached in his pickup while travelling too fast for conditions and having extremely poor eyesight. It had rained earlier that day. Patterson’s limited perception caused him to lose control of the pickup, Lane’s alleges.

Patterson’s version of the story was more similar to Monroe’s, accusing McGuffee of having blocked the northbound lane. One addition to his story was the fact that Monroe did not wear a bright reflective vest during the event, despite company policy.

Lane’s and McGuffee shifted the blame to Monroe. In addition to not wearing a safety vest, the defendants claim that Monroe assumed all risks involved in placing himself on the highway. All South Metals was also accused of not properly training Monroe. Patterson made similar claims.

It came down to a “he said, she said” account of the incident for the jury. In the end, the jury decided Monroe’s version of the story was the truth. Accordingly, Monroe was awarded $20 million for damages. Rhonda Monroe was awarded $1.6 million after claiming loss of consortium as due to the effect Donald’s injuries has had on their marriage.

So who was responsible?

According to the jury’s verdict, Lane’s Equipment Rental and Daniel McGuffee, along with their insurance company, were held 99.99% liable. Patterson, the pickup driver, was found to be 0.01% liable. If paid out proportionately, 0.01% of $21.6 million is $2,160. 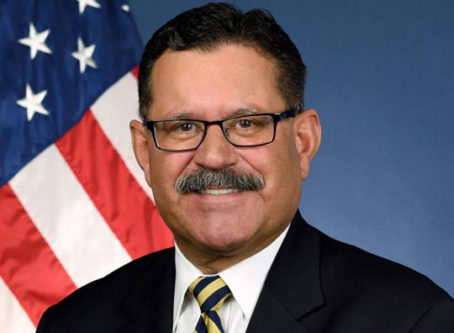 Martinez: I want to hear from you

In a Land Line Now exclusive, FMCSA Administrator Ray Martinez urges truckers to speak out and offer feedback on proposed changes to the hours of service.