Truckers who don’t comply with a quarantine effort to restrict the spread of an invasive insect in Pennsylvania and nearby states can face fines of up to $20,000.

The Pennsylvania Department of Agriculture, as well as surrounding states, have issued a quarantine for counties where the presence of spotted lanternfly has been confirmed. Pennsylvania, New York, and New Jersey, require permits for motor carriers that pick up or deliver a load in the quarantine zone.

The permit program is free, but failure to comply could cost an offender. Fred Strathmeyer, deputy secretary of Pennsylvania’s Agriculture Department, says the state would prefer not to issue fines at all.

“We’re not out there to be fining anyone. We’re out there to educate,” Strathmeyer said in a phone interview with Land Line Now on Thursday. “This is just becomes that next step where people that that are not abiding by the rules that are to go along with the quarantine and that’s where our concern is.”

“What we’re doing is we’re simply just making sure that people are following the rules,” he said.

Strathmeyer says the quarantine appears to be containing the insect, which was first sited in the U.S. in 2014. He says the time for truckers to be extra vigilant is July and August, when the fly enters the adult stage of its lifecycle.

“It becomes a great hitchhiker at that point and that’s really the time that we’re critically concerned,” he said.

The spotted lanternfly is invasive planthopper native to China, India and Vietnam. It has the potential to greatly affect agricultural crops, including grapes, hops and hardwoods.

Truck drivers should be aware, because states can levy fines and civil penalties for transporting – knowingly or unknowingly – spotted lanternfly and/or their eggs. Satellite populations have appeared in New York and Virginia. 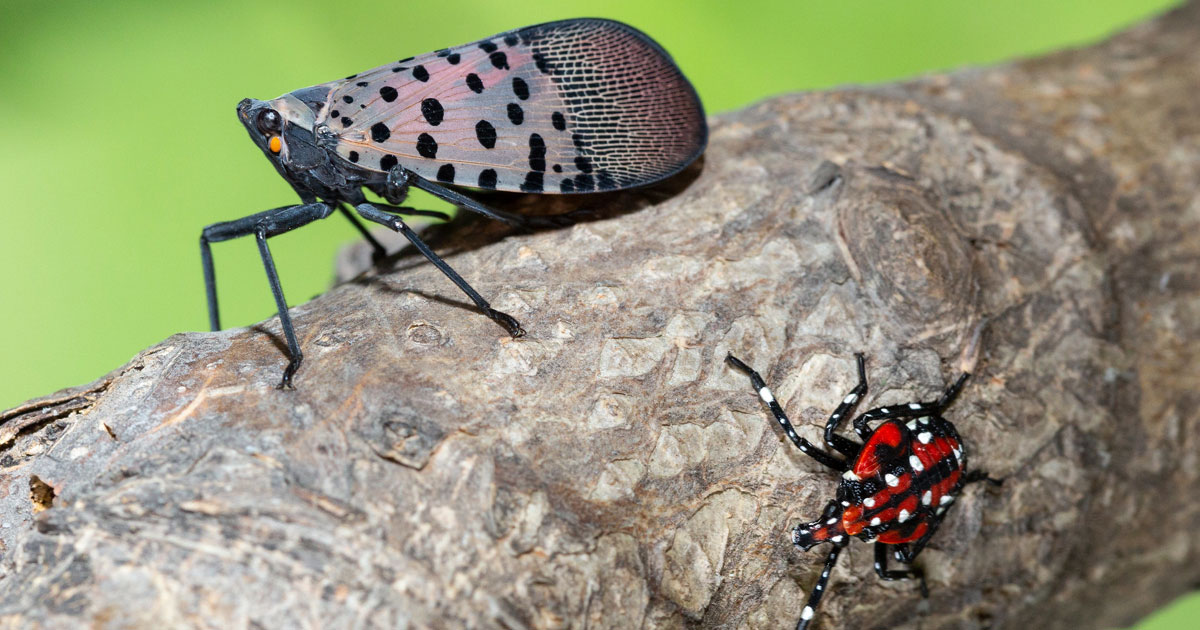 Adults are approximately 1 inch long, by a half inch wide, with distinctive gray, black and red wings and a yellow abdomen. Immature stages are black with white spots, and develop red patches as they grow.

The egg mass stage looks “like a smear of mud” and can be found on any smooth, hard surface. Egg masses can be found on trees and plants, pallets, bricks, stone and metal.

Loads that originate outside the quarantine zone and are not being delivered within it do not require a permit to travel through the zone, per the Pennsylvania State University Extension office, though the office suggests that such businesses “consider securing the truck and load from hitchhiking spotted lanternfly. Trucks that stop in the zone and unload product are required to obtain permits.

Penn State Extension and state Department of Agriculture have developed a free, self-paced, “train the trainer” online course to train a designated employee – usually the owner, manager, or supervisor – on how to comply with the quarantine regulations. A link to the course is available via the OOIDA Foundation website.

Nymphs or adult lanternflies can be killed simply by being smashed or squished. The egg mass stage is more difficult to destroy. The Extension office recommends scraping the mass off of whatever surface it’s located on, into a container that has rubbing alcohol or hand sanitizer. Then double-bag the container before disposing of it.

If you are outside of the quarantine area, report any sightings to the Pennsylvania State University Extension at Extension.PSU.edu/spotted-lanternfly or call 888-4-BADFLY (888-422-3359).

The FMCSA is continuing its efforts to remove ELDs that fail to meet the minimum requirements from the agency’s registry.

OOIDA and transportation leaders react to State of the Union address

During the State of the Union address, Biden applauded the bipartisan infrastructure bill for creating jobs. Not everyone shared the president’s enthusiasm.