The Spirit’s Osburn to retire; next stop is Brazil, Ind.

OOIDA’s tour trailer next rolls into Brazil, Ind., and even though today is April Fool’s Day this next sentence is not a prank. Jon Osburn, skipper of the Spirit of the American Trucker, plans to retire by mid-April.

There are just a handful of stops left with Osburn at the helm of The Spirit. He plans to retire April 16.

Osburn, his canine co-pilot, Sassi, and The Spirit are scheduled April 2-4 to be at the Petro in Brazil, Ind. It is at Exit 23 from I-70.

The Iron Skillet dining room at the Brazil Petro is open, which is good news for Osburn. There is parking for 102 tractor-trailers there.

A successor has been chosen

A new skipper has been selected to take the helm of The Spirit. His name is familiar to many of us. It is OOIDA senior member Marty Ellis. His home is in Carl Junction, Mo., but Ellis has worked quite a while for a South Dakota motor carrier.

He, like Osburn, has been honored as a TA & Petro Citizen Driver. There is a TA in Rogers, Minn., dedicated to Ellis.

At the previous stop for The Spirit in New Paris, Ohio, near the Ohio-Indiana state line, the big topic of discussion was the funding for truck parking promised by the Truck Parking Safety Improvement Act.

It is a bill introduced by Rep. Mike Bost, R-Ill. He had introduced a similar bill to Congress last year. The Owner-Operator Independent Drivers Association backs the bill and helped in crafting it. The bill allocates $755 million over five years specifically to add truck parking capacity.

If you see OOIDA’s tour trailer, stop by and say hello to Osburn. He enjoys visiting about the Association’s activities and current issues. He usually has copies of Land Line Magazine to hand out. You can join or renew your membership for $10 off the regular price there. Face masks are available for anyone with a commercial driver’s license at The Spirit. Drivers without medical insurance can get vouchers to get flu, shingles and pneumonia vaccines at The Spirit.

After Brazil, The Spirit is scheduled to stop April 5-7 in Effingham, Ill. After that, Osburn has stops scheduled for Kingdom City, Mo., and Concordia, Mo. 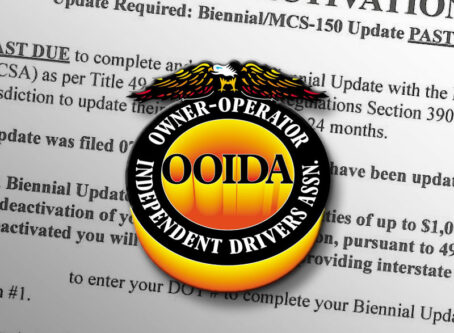 Marty Ellis has the OOIDA tour trailer at Jubitz Truck Stop in Portland, Ore., for a couple of days before two stops in Washington state.