The Spirit heads to Steele, N.D.

The Coffee Cup Fuel Stop/TA Express in Steele is a familiar haunt for OOIDA’s tour trailer, The Spirit of the American Trucker.

Jon Osburn, skipper of The Spirit, pulled in there last year. This is where the Coffee Cup Fuel Stop chain began in 1981. Last year, it became a TA Express franchise. There are 75 truck parking spots there, and there is a Pizza Hut Express and a Subway.

There will be a familiar face waiting when The Spirit rolls into Steele. Sandy, the “world’s largest” sandhill crane, will be there. It is 40-foot sculpture made of steel and sheet metal. It is visible from I-94 and close to the truck stop too.

As it happens, Sandy’s creator wasn’t the only regional resident who has proved handy with a welder, thinks large scale, and creates their artwork near an interstate. West of Steele there is also the “Enchanted Highway,” a series of large sculptures visible from the highway or at least a not far from it.

The Enchanted Highway is about 130 miles west of Steele on I-94 on the other side of Bismarck. There is a highway exit sign for it.

Keep an eye peeled for “Geese in Flight” in Gladstone, N.D. If you take a detour and go south from Gladstone, you can find “Deer Crossing,” “Grasshoppers,” “Fisherman’s Dream,” “Pheasants on Parade,” “Teddy Roosevelt Rides Again” and “Tin Family.”

More often than not, in the evening Osburn turns on Land Line Now for him and whoever is around to listen to. At the last stop in Fargo, N.D., Osburn said the Land Line Now segment on what inspectors look for in brakes had some good advice, and the drivers around that night were appreciative.

“There was some good stuff there, and particularly timely because of Brake Safety Week,” Osburn said.

Just a head’s up – inspectors will be out in force again in September. International Roadcheck is scheduled for Sept. 9-11.

After Steele, OOIDA’s tour trailer is scheduled to stop in the other Dakota state, in Summit, S.D. Here is the schedule for The Spirit. 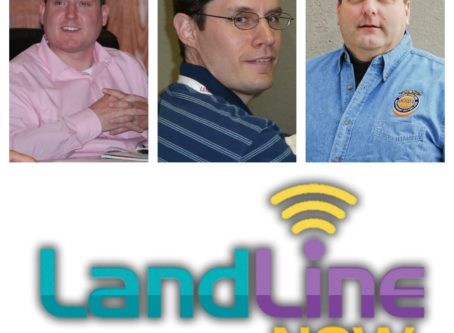 A recent report from Mexico contains some disturbing cargo theft numbers. Also: What does the government re-opening mean for FMCSA’s regulatory agenda?

The next “Live From Exit 24” will focus on COVID-19 and its effect on trucking and how it forced the reimagination of events like GBATS.