TFI International will buy UPS Freight for $800 million, and the Great Name Game goes on.

TFI, number 11 on Transport Topic’s Top 100 For Hire list, will operate its new acquisition more or less in its current form but with a new name – TForce Freight. The Montreal-based holding company is no stranger to carrier name changes. The last was in 2016, when TransForce International bought CFI from XPO. It also began referring to itself as TFI.

Here’s how all those initials break down. CFI derives from Contract Freighters International. TFI stands for TransForce International. XPO is the stock symbol for the company XPO. UPS, of course, is United Parcel Service.

On the TFI side of the UPS Freight deal, the story goes like this: Old time LTL carrier Consolidated Freightways, a big, 350-terminal Teamster company, started a nonunion sister outfit it called Conway Freight in 1983. (Actually it was a group of regional Conway carriers that eventually became the big, national LTL.) Conway was quite successful even as Consolidated Freightways fell into bankruptcy and ceased operations in 2002. That success, of course, had more than a little to do with Conway’s nonunion, lower-pay status.

It was around that time that Conway decided it needed a truckload division. They tried to start one from scratch, but it was taking too long, so in 2007 Conway bought CFI, based in Joplin, Mo. CFI had been in business since 1951 and did lots of cross-border business with Mexico. Conway renamed CFI “Conway Truckload.”

Then in 2015, XPO Logistics with a pile of investment money bought Conway, both the LTL and truckload divisions.

Conway Truckload became XPO Logistics Truckload – but not for long. XPO wanted Conway’s LTL operation, but not truckload. So, the following year, 2016, XPO sold the truckload operation to TFI – then called Transforce – which changed the division’s name back to the more familiar CFI. The paint had barely dried on some XPO truckload trailers when they had to be repainted with the CFI logo. TFI is a holding company, not an operating company, and CFI became one of nine truckload outfits it owns, including Transport America of Minneapolis, another familiar name on U.S. highways.

Meanwhile, there’s a story on the UPS Freight side of the deal too. With rival FedEx Freight growing successfully in the early 2000s, UPS decided they needed an LTL division too. So, UPS bought 70-year-old LTL carrier Overnite Transportation. Based in Richmond, Va., Overnite was the fourth largest LTL in the U.S. and the largest nonunion carrier. It was owned at the time by the Union Pacific Railroad, which was fond of Overnite’s nonunion character.

That nonunion status came under siege in 1994 during a Teamster strike against Overnite’s unionized competitors. With those carriers sidelined, Overnite saw a chance to increase market share. The company accepted more freight than it could handle and was overwhelmed. Management pushed its people to the limit, and the result was an employee rebellion. Drivers and dockmen among at the company’s 175 terminals began signing cards to join the Teamsters. In the bitter struggle that ensued, the president of Overnite was ousted and Overnite’s people received two substantial wage hikes. The Teamsters made progress at the outset, but management prevailed in the end.

After the uprising was over, Overnite remained essentially nonunion – until the UPS acquisition in 2005, that is.

Since UPS, the largest motor carrier in North America, was a Teamster company, its new LTL unit became union too. So, after the tumultuous struggle to keep the Teamsters out, UPS simply opened the door for them. The drivers and dockmen of Overnite – aka UPS Freight, TForce Freight – joined the Teamsters after all.

The $800 million TFI is paying for UPS Freight is $500 million less than the $1.3 billion UPS paid for Overnite in 2005. The sale is in keeping with the program UPS calls “Better, Not Bigger,” which may be a positive spin on a shrinking – or at least not expanding – UPS. LL 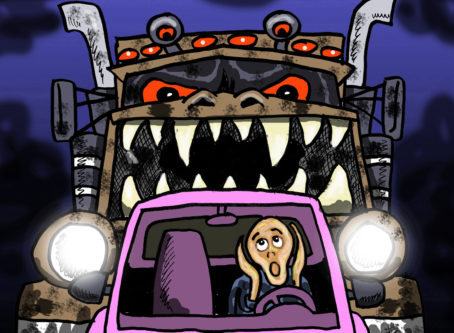 ‘Semi terrified’? How about ‘Hell on Four Wheels’ instead…

An Ashville, N.C. columnist and aspiring novelist wrote a story about a “terrifying” late-night encounter with a trucker on a lonely stretch of highway, which sounds awfully familiar to a certain Steven Spielberg movie…