Kerry Evans-Spillman joined OOIDA in 2005 and worked in a variety of roles until Land Line was able to successfully whisk her away to join our team in 2008. With the evolution of social media, Kerry took on the task of developing a presence for Land Line and Land Line Now, dragging the rest of the crew along kicking and screaming. She was officially dubbed the Social Media Maven in 2010, acting as our social media coordinator. She currently coordinates all of OOIDA, Land Line and Land Line Now’s social media accounts on Facebook, Twitter and Instagram. Since Kerry frequently is the teacher on duty on the social media playground, she gets to run incognito. So instead of a real headshot, you are blessed with her best Wilson impression from Home Improvement. 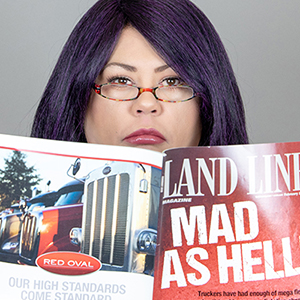 What Kerry Has Been Working On