Success means having a plan 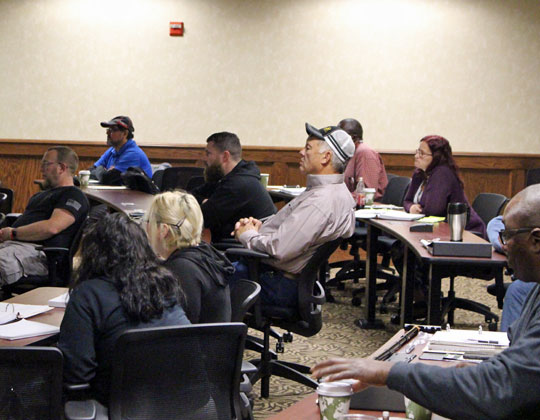 As stated within the name, the OOIDA Foundation’s Truck to Success course is designed to best help those taking the next step in their trucking career to succeed.

Specifically, as an owner-operator it’s particularly important that you have a plan.

Of the numerous aspects covered throughout the training, it all starts with the business plan, Andrew King of the OOIDA Foundation said during his presentation to open the course.

“One of the biggest reasons for failing as a business is the lack of planning,” King said. “We know 25% of trucking businesses fail in the first year, and by the fifth year 60% fail. There’s a lot of men and women out there who can drive a truck, but they’ve never owned a business. Creating a business plan doesn’t have to be anything complicated, but you need to think of yourself as a business and not just a driver. You need to know what the costs are.”

For three days this week at the Courtyard by Marriott in Blue Springs, Mo., OOIDA provided an in-depth training curriculum featuring step-by-step guidance from industry experts.

The course also was offered virtually for those unable to attend in person.

“There’s so much information in these three days, it’s kind of a baptism by fire,” OOIDA Executive Vice President Lewie Pugh said. “It’s a little bit of an expense to take this course, but if you’re going to spend hundreds of thousands of dollars on equipment going into business for yourself, do yourself a favor and spend a little money upfront. The class is important to OOIDA because we love truckers and want everybody to be successful. We’re giving you a head start on figuring it out.”

The history of OOIDA, cost of operations, equipment financing, lease purchases and tax incentives were among the presentations on day one of truck to success.

Day two of Truck to Success consisted of sessions on authority, permits and licensing, International Fuel Tax Association and fuel purchases, insurance, truck/cargo claims, drugs and alcohol and bookkeeping and taxes to name a few.

The third and final day touched on brokers and factoring, getting loads with your authority, successful business operation and government affairs.

No doubt, a wealth of information was provided and those in attendance say the time and money spent to be there was a sound investment.

“I needed this, and I’m at the age where I’m thinking about retirement,” Juan Mendoza, a driver leased to Landstar from Lorain, Ohio said. “Lowering my taxes was something I need help with, and I want to get some drivers to drive for me. I’m going to make an investment, and I want to do it right.”

For Jeanne Kurdle, owner of Trucker’s Friend Dispatch in Marshfield, Mo., learning the back office side of the business was the goal.

“I wanted to learn as much as I can about the industry to make sure that I’m beneficial to their business,” Kurdle said. “That’s how I see myself, working for the owner-operator. I feel like I’ve gotten my money back tenfold. I’ve also made connections so that I have resources to go back to later when any issues come up.” LL