Fuel tax increases is among the funding options expected to be considered in the months ahead at statehouses across the country. Below is a sampling of discussions that are likely to take place.

State legislators are expected to begin 2019 pressing forward on a plan to fund infrastructure projects.

Newly re-elected Republican Gov. Kay Ivey and GOP leaders at the statehouse must decide whether a fuel tax increase is among the solutions to the state’s funding needs.

The rest of the revenue goes to the state Department of Transportation.

In addition, local governments can choose to collect their own fuel tax.

Discussion leading up to the convening of the 2019 regular session is focused on possibly indexing the state’s excise tax rate. The change to indexing would allow for the fuel tax to rise automatically with the rate of inflation.

Republican leaders have opposed efforts to raise fuel taxes in recent years. Instead, the state has relied on borrowing.

A fuel tax increase is anticipated to come up for discussion soon at the statehouse.

Increased vehicle fees are slated to be implemented on Jan. 1, 2019.

Some discussion in the lead-up up to next year’s regular session covers a possible increase in the state’s 24-cent excise rate.

A state task force has recommended that state lawmakers pursue more money via sales taxes, the fuel tax, and a fee on electric vehicles. Amounts for possible increases have not been determined.

The panel has recommended that any additional revenue raised for transportation be protected via a lockbox. They note that more than $2 billion in transportation revenue has been rerouted to other budgets in recent years.

The pursuit of a fuel tax increase is in the offing at the state capitol to help address a $1 billion backlog in road paving projects.

The existing gas and diesel rates are tied to the price at the pump. Price dips result in fewer tax dollars charged.

One possibility to help address the issue is the implementation of a flat tax rate.

A failed bipartisan attempt during the 2018 regular session sought to raise the state’s fuel tax rate by a dime to raise $390 million annually. Annual fees would also have been permitted on hybrid and electric vehicles.

Leaders in the GOP-led statehouse say that a fuel tax increase is not the lone solution to address long-term funding needs.

At least one group in Louisiana has indicated they will call on legislators to raise the state’s 20-cent fuel tax rate.

During the past two regular sessions there have been attempts to raise the rate by as much as 17 cents.

Other options are expected to be considered in the upcoming regular session.

Department of Transportation and Development Secretary Shawn Wilson said he supports use of public-private partnerships to get road projects done. Doing nothing, he says, could result in the state losing a portion of its $600 million in annual federal highway aid.

Gov.-elect Tim Walz has wasted little time since winning the governorship to tout the need for a fuel tax increase to pay for transportation improvements.

The state now charges a 28.5-cent tax rate on gas and diesel. The tax raises about $910 million one year ago.

The Democrat says transportation will be a top priority of his administration. To date, he has declined to offer specifics on how much the tax should be increased.

Whether the idea can gain traction at the statehouse is unknown. Democrats control the House chamber but Republicans hold a one-seat majority in the Senate.

Other options mentioned for addressing transportation needs is tapping a potential budget surplus and using auto part sales and repair taxes solely for transportation purposes. The revenue now is earmarked for the state’s general fund.

A large transportation funding bill is expected to be considering during the 2019 regular session. 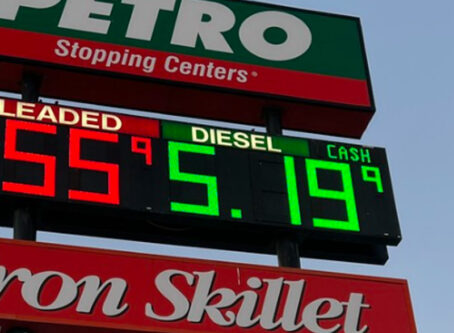