A North Carolina towing company and its owner are being sued by the state’s attorney general over charges claiming the business has been gouging truck drivers during the pandemic.

Attorney General Josh Stein announced on Tuesday, May 6, that his office has obtained a temporary restraining order against Charlotte-based A1 Towing Solutions and its owner, David Jewel Satterfield.

Stein said in a news release that the towing company allegedly violated North Carolina’s price gouging statute and engaged in deceptive trade and unfair debt collection practices during the COVID-19 state of emergency. The restraining order has banned the company from the towing business in the state until a court hearing.

According to the complaint, A1 Towing allegedly improperly booted trucks that were delivering food, water and needed medical supplies. In some cases, the drivers had permission from property owners to park on the property. Truckers were forced to pay bills of up to $4,400 for the release of the trucks.

“As North Carolinians were waiting on critical supplies to respond to the COVID-19 pandemic, these defendants were exploiting the situation for their own profit,” Stein said in the release. “Any would-be price gouger should take note – my office will hold you accountable for harming people in this time of crisis.”

A1 Towing also allegedly double-booted trucks and trailers in order to double the price for removing the boots, and charged inflated and/or bogus fees for credit card use and filings with the DMV. It also allegedly threatened to increase fees for the release of the trucks unless the drivers paid immediately.

The attorney general is seeking temporary, preliminary and permanent injunctive relief against the defendants as well as restitution for victims, civil penalties, and other relief.

“We applaud North Carolina for aggressively going after predatory towing companies. We only wish this would have started years ago because this crooked scheme predates the coronavirus,” he said. “OOIDA member Leander Richmond truly deserves a ton of credit for relentlessly raising awareness about this issue in North Carolina, so hopefully the state is finally going to do something about it They need to make an example out of these predatory towing companies.”

North Carolina’s price gouging law went into effect on March 10, when Gov. Cooper declared a state of emergency in North Carolina in response to the COVID-19 pandemic. To date, consumers have filed 1,763 complaints with the state attorney general’s office. 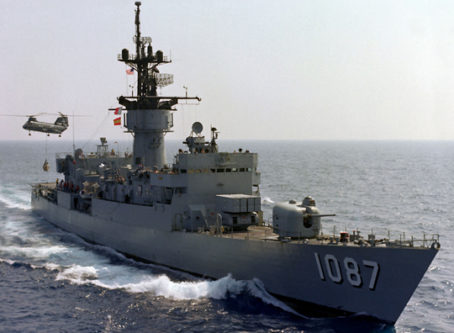 Saigon’s fall from the deck of the Kirk

When Saigon fell 45 years ago, a small Navy vessel played a key role in rescuing thousands of refugees. We’ll have an encore of the tale of the USS Kirk.