As the COVID-19 novel coronavirus continues to spread across the United States, many restaurants are either choosing to or being forced to close its doors to dine-in customers.

For truck drivers this can be especially problematic as many restaurants are not accessible to heavy-duty trucks for drive-thru or carry-out orders.

Nearly two years ago, however, a Sonic in Fordyce, Ark., built a drive-thru specifically for heavy-duty trucks. Employees at the Sonic location confirmed with Land Line on the afternoon of Thursday, March 19, that its drive-thru for trucks was still open for business.

As they were scouting their new location, the owners of the Sonic Drive-In in Fordyce, Ark., noticed all the big rigs traveling on Arkansas Highway 8 and nearby U.S. Route 79.

Not long after, Ricky Davis and his son, Scott, started working on plans to build the Fordyce location so that it could accommodate heavy-duty trucks.

“They were looking at (Route) 79 and noticed the incredible number of 18 wheelers going by,” said Travis Larison, an area supervising partner for Sonic. “They got to talking and decided to put in a drive-thru for big trucks.”

To put it into reality, they got measurements from a tractor-trailer and then set out to build a Sonic with the components of a normal drive-in, then added accessible digital screens, a driveway and a larger parking area. Completed in September 2018, the Sonic featured 17 stalls and a drive-thru window for passenger vehicles, as well as two standalone menus for trucks pulling trailers and a third menu for 18-wheelers and buses. To allow employees to deliver the food to the truckers, they got steps that would be typically used for a mobile home.

“We hadn’t done anything like this before, so it was kind of scary,” Larison said. “We had already built the place and spent $2 million, so we hoped we had the correct angle and everything. We went and found a truck driver and told him we’d give him a free meal if he’d come to the Sonic and test this out for us. He went though, and it was just the right height.”

On the day the truck-friendly Sonic opened, the business posted a photo of its first big rig drive-through customer on Facebook. Quickly, the news spread.

“We put on Facebook that we had a stall for 18 wheelers, and it went viral,” Larison said. “We had almost 1 million views. A truck driver in Georgia saw it and called just to say, ‘Thank you.’”

He wasn’t the only one. The post was shared 8,600 times and received 456 comments – mostly positive ones from truckers. In a world that often seems to go out of its way not to accommodate truckers, the gesture was well received.

“I have been a driver for a long time and often wished we had drive-thrus,” wrote Vicki Sue Clark.

“I want to say thank you,” wrote Angel Missy. “Not a lot of places think about us.”

Larison said it has served as good public relations for the entire business.

“Even regular customers come up to me and tell me how cool they think it is that we are doing that for truck drivers.”

So far, Larison said about 500 trucks use the drive-thru each month with the average ticket price being about $2.50 more than from passenger vehicles.

“Of course we’re in business to make money, but the best thing about this has been the wow factor and all of the positive PR.

“We know how many trucks there are on the highway, and we wanted to find a way to accommodate them. Those guys get hungry too, so it seemed like time to do something about it.” 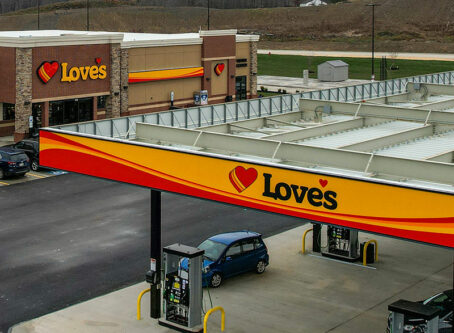