‘Semi terrified’? How about ‘Hell on Four Wheels’ instead…

Stop me if you’ve heard this before.

’Twas a dark and stormy night, and an unsuspecting motorist is menaced by an “antisocial bully driving an 18-wheel death wagon.”

Sounds a lot like the plot for “Duel” Steven Spielberg’s 1971 film in which Dennis Weaver is stalked by a mysterious trucker. While originally a made-for-TV feature, the film’s success prompted a theatrical release. The plot devices were so effective, Spielberg would go on to crib them for his landmark blockbuster “Jaws” in 1975.

While “Duel” went on to become a commercial success and launch the career of one of Hollywood’s most famous directors, it also did for the public perception of truck drivers what “Jaws” did for Great White sharks – turned them into objects of fear and derision.

However, the scenario I’ve laid out isn’t expressly from “Duel,” but rather comes to us from a recent column in The Asheville Citizen-Times, under the byline of columnist/aspiring novelist Ted Alexander.

Alexander recounts a recent encounter he had on an icy stretch of (presumably) North Carolina highway, with what he describes as “an outlaw who balanced his life on the edge of a razor. 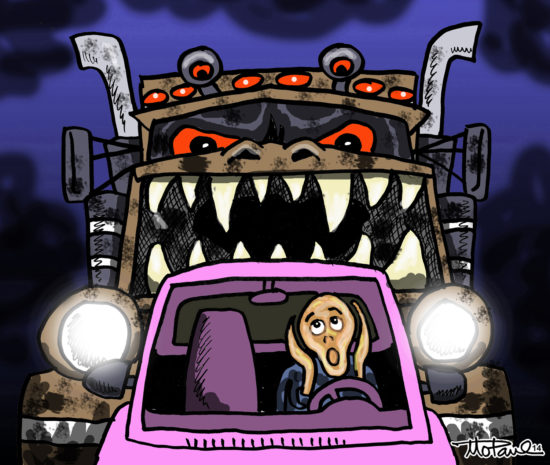 Although he doesn’t specify a date or location of the incident, Alexander says he was attempting to pass other vehicles in freezing rain conditions late one night, when “a rapidly approaching 18-wheeler” appeared in his rear view mirror. Despite gunning his engine up to speeds of 75 mph on those icy roads, Alexander said he was unable to make his way back into the right lane for some time, drawing the ire of the trucker, who, according to Alexander, executes the “Duel” sequence of speeding around his vehicle and then slowing down almost to a crawl, before refusing to allow him to pass.

Alexander said he eventually pulled over to the shoulder and tried to call 911, but couldn’t get a connection. Then things start to get really weird.

About a half-hour after the initial encounter, Alexander’s back to driving down the road, when he sees the same trucker exiting to a nearby truck stop. He decides to follow the guy into the parking lot “to get close enough to see what the driver looked like and write down his plate number.”

His description of the driver – “a rotund little man – an attack muffin; the Wizard of Oz in a baseball cap, quilted vest and plaid shirt” – reads like something straight out of central casting for the part of “Truck Driver.” (Also, if you know what the phrase “attack muffin” means, please email me – Urban Dictionary doesn’t even have a definition …)

Alexander then breathlessly recounts how this “attack muffin” starts savagely kicking the tires of his own trailer, before he looks up and makes eye-contact with the author. After the driver bellows and starts walking toward him with a wrench, Alexander makes tracks. He then concludes his tale with a warning that this blood-lusting trucker is still out on the prowl.

When I first read it, I had more than a few questions, so I reached out to Alexander at the email address provided with his article. I wanted to ask him about the encounter (Where, exactly, were you? When, exactly, did it happen? Has anything like this ever happened to you before?) I also wanted to give him the benefit of the doubt. I was taught early on that you ought to make every effort to ensure the other side has a chance to have their say in print. He’s yet to respond to my request.

There are bad actors and bad drivers out there, in both 18-wheel and four-wheel vehicles.

But in that spirit of giving the other side a chance to be heard, I present to you a little “creative non-fiction” of my own – Mr. Alexander’s encounter with the menacing trucker, told from the truck driver’s perspective.

“It was 10 o’clock at night. The temperature was holding steady at the freeze line, and the rain was turning to sleet. I was making my way through the Blue Ridge in North Carolina, trying to find a place to park before I hit my 11 hours for the day.

Luckily, I know there’s a little truck stop not more than an hour up this state road, and with the weather turning bad, it’s liable to be pretty crowded on a night like tonight. Knew I had to find a (relatively) safe place to get to, and soon. Since I don’t have an APU, I can only idle for five minutes every hour to keep my sleeper warm. Gonna be a cold night when I finally get to stop.

Fortunately, the roads haven’t gotten bad yet and I’m able to drive the speed limit. But I guess the mere mention of looming weather conditions has a lot of folks out here driving scared. Lots of slow traffic making driving tricky.

I’m trying to pass a few slow-moving four-wheelers, when one of them suddenly cut right in front of me in the left-hand lane.

I flashed my high beams to let him know I was coming up behind him, because it seemed obvious to me he didn’t look too close before changing lanes. So here we are, in less than ideal driving conditions, with a gaggle of slow-moving geese hemming me in on the right, and a wannabe Dale Jr. directly ahead of me.

So this four-wheeler pulls into the passing lane, and now he won’t get back over. He’s just sitting in the left lane slowing me and everyone behind me down. We’re barely matching pace with the cars in the right-hand lane. Now I’m stuck playing the world’s worst game of Follow-The-Leader. First he’s slowing down, now he’s speeding up. Still doesn’t get over.

After a few miles of this chicken dance, I drop back behind him, flash my lights and hit the air horn, hoping he’ll pick up the pace and break us free from this bottleneck. Finally, the driver makes a move to the right lane. I’m able to build up enough steam to pass him, but almost immediately have to slow down because the road conditions are worsening. The speedometer drops to 50, then 40, then 30. I glanced in my mirrors and saw Hot Wheels pull over to the side of the road. Conditions must have been too much for him.

About a half hour later, I’ve finally made my exit.

I saw the white lights of the truck stop and pulled into the fuel island. I get out to do a walk-around and check my truck and trailer. The snow and ice is caked in the wheel wells and hanging from my trailer. It didn’t look like the truck stop had any parking spaces left, and I was right up against my hours, so I started venting, kicking the hell out of my tires.

Here’s where things got kind of creepy. We’ve all had that feeling of being watched, and as I was messing with the tire, I was overcome by a sense of foreboding. The hairs on the back of my neck started standing up, and it wasn’t from the cold. You spend enough time on the road, and you’ll develop a sense of when danger is near. I’ve had too many buddies and fellow truckers get accosted at truck stops and restaurants not to be at least a little cautious about some situations, particularly after dark on a night like that.

I looked over my shoulder and I saw that same four-wheeler, ol’ Dale Jr., from earlier. He was just sitting behind the wheel, staring at me. It got my dander up. Especially when he knew I’d spotted him and recognized him.

I didn’t know what this guy wanted, but it was obvious to me that this jack-wagon wasn’t there for fuel or coffee, so I hollered at him, and made for my cab. I keep a wrench there, mostly for repairs. But I’ve had to grab it a time or two in the past to make some rowdy punk think twice about trying to roll me for my wallet. I started toward the the car, because I wanted to get close enough to see if I could a plate number off this guy, just in case he decided to go psycho.

When he saw me coming closer, he hit the gas and tore out of there.

The dirt and salt was covering his plate so I couldn’t get a read on it. It shook me up pretty bad. I probably should have called the cops and told them there’s a maniac out there, driving crazy and stalking people coming off the highways.

I went inside and let the manager of the truck stop know about it at least. Told them to keep an eye out for that guy and his vehicle. After hearing about my day, the manager ended up letting me park in an area that’s normally off-limits. I climbed in my sleeper and prayed he wouldn’t come back and mess with me or my rig. Thankfully, he didn’t come back, and I count myself lucky I haven’t come across him since.

Ask any driver and they’ll tell you one of the worst parts of the job is dealing with four-wheelers who don’t know how to drive, who change lanes at the drop of a hat, or drive too fast or too slow for conditions. But it’s even worse when you’re menaced by some yahoo who follows you for 30 miles when all you’re looking for is a safe port in the storm.” LL 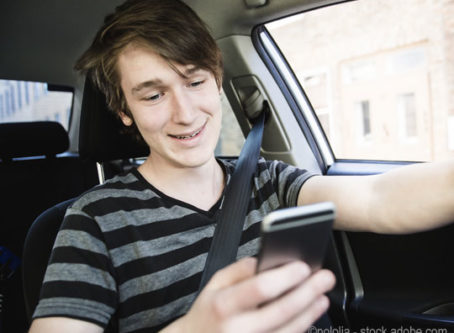 There are two issues that get many of us riled up. One is the incessant push by trail lawyers to increase the required minimum insurance coverage from $750,000. The second is another incessantly pushed idea that 18-20-year-olds driving tractor-trailers from state to state and across the country is a good idea. Though I worry in […] 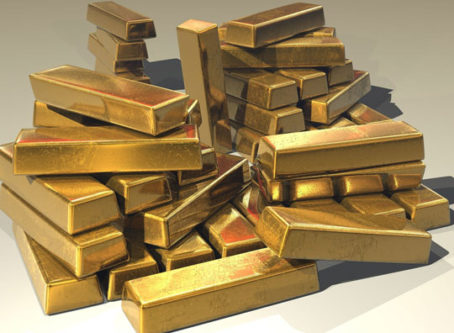