Misinformation about trucking, especially crash data, is plentiful on the internet. Sometimes the info is so bad that it warrants being singled out, which is the case with a recent article on the website Report Door.

On Oct. 19, Report Door published a story with the headline “How many accidents are caused by truck drivers?” The article is full of stats and cited studies. Some of the stats are legit. However, most are either out of context or straight up wrong. Let’s break it down.

Report Door likely lifted that straight from the Insurance Institute for Highway Safety’s website, as seen here. The numbers are mostly correct, with the numbers having been updated since that post. Crash stats were likely preliminary at the time.

Report Door’s claim of a 31% increase in truck-involved deaths is misleading. That is the number you get when comparing 2018 to 2009, the historical low.

The historical low was nearly a decade prior, and the comparison ignores every factor in that nine-year gap.

According to the Department of Transportation’s Fatality and Injury Reporting System Tool, truck crash fatalities increased by 1% in 2018 compared to the previous year. Compare that to 2017’s 5% increase, 2016’s 14% increase and 2015’s 5% increase, and all of a sudden, it’s not so bad. 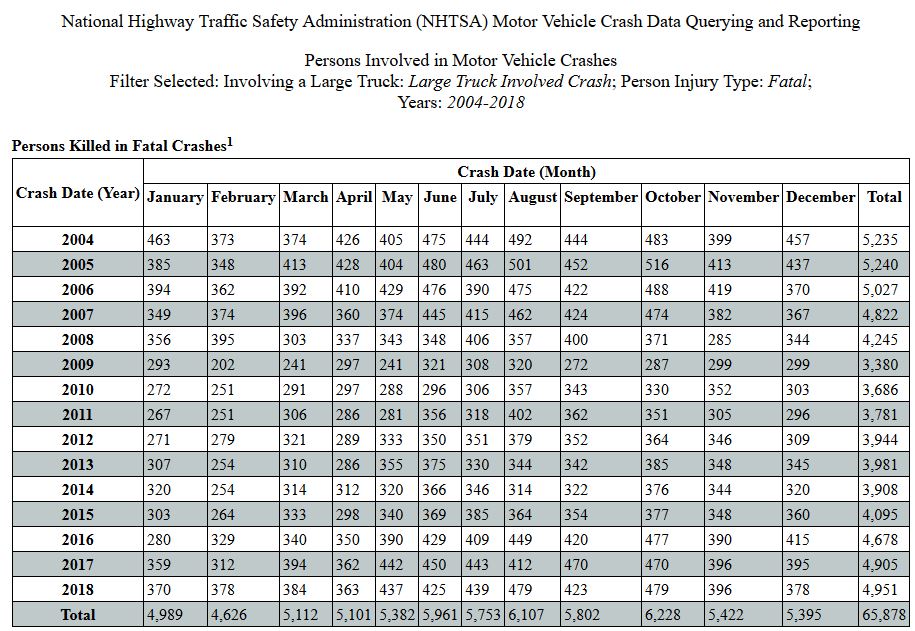 Dialling (sic) a cell phone or sending a text can take your eye from the road for as much as four seconds. Although that does not sound like a long time, in that four seconds, a truck driving 55 miles per hour will travel the length of a football field. In 2009, one study found that 71 percent of all large truck crashes occurred due to distracted driving.

The 2009 study being referenced by Report Door is the Federal Motor Carrier Safety Administration’s “Driver Distraction in Commercial Vehicle Operations” report. Go to page 39 of that study to find the above claim. What you will find is “driver distraction due to nondriving related tertiary tasks was a contributing factor in 71% of crashes.” However, in crashes where the trucker was found to be at fault, that number drops to less than half (40% ). Although texting and dialing are included in the study, so are minor movements like putting on a hat, using chewing tobacco, biting nails, putting on/removing sunglasses and talking/singing/dancing with no indication of a passenger (see page 32 of that study).

According to NHTSA, of the 4,951 people killed in truck-involved crashes, only 585 (12%) were killed in crash involving a distracted driver, down sharply from 2004 through 2009.

More importantly, that number does not reveal which driver was distracted. 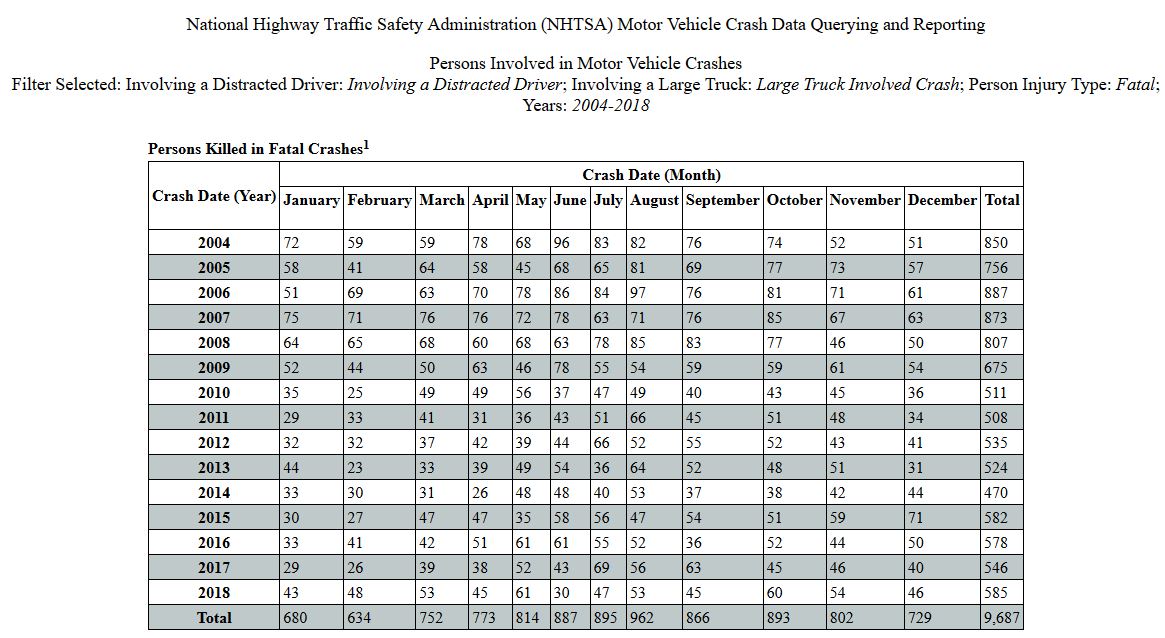 “In one study” appears to be “Safety Study: Fatigue, Alcohol, Other Drugs, and Medical Factors in Fatal-to-the-Driver Heavy Truck Crashes, Volume,” which was published 30 years ago. Of 182 fatal crashes analyzed, 31% of the truckers (57 of 186) were fatigued. However, 19 of those 57 fatigued drivers (one-third) were also impaired by alcohol, other drugs, or both. Did I mention these numbers are from 30 years ago?

A study of transportation statistics conducted by the United States Department of Transportation found that truck drivers with less than five years’ experience are 41 percent more likely to cause an accident than one who had more experience. There are times when a trucking company does not properly train their drivers, leading to a driver who has not spent enough time learning. They may make errors that lead to disastrous results.

Give a monkey an infinite amount of time on a typewriter and it will eventually type up the complete works of William Shakespeare.

In other words, Report Door actually got something right here. You can find it here, and is why stakeholders have been pleading for stricter driver training rules.

According to a report on the danger of debris on the roads conducted by AAA, improper loading and securing of cargo accounted for more than 200,000 crashes between 2011 and 2014. The study also found that 37 percent of all deaths were the result of a driver attempting to swerve and miss the debris. Most of these types of crashes occur in the middle of the day.

Not exactly. According to AAA, those 200,000 crashes were the result of road debris and accounted for all vehicles. Blown tree branches can be debris. In fact, AAA explicitly states “two in three debris-related crashes result from items falling from a vehicle due to improper maintenance or an unsecured load.” So that 200,000 figure cited above is actually closer to just more than 130,000 and includes detached tires, mattresses on top of passenger vehicles, etc. Also, 37% (185) of the 500 road debris-related deaths was the result of avoiding debris. In the context of Report Door’s article, it sounds like improper truck loads caused these crashes. Not even close.

I searched high and low for this stat, and it is nowhere to be found. Correction: You can find it on several injury law firm websites, including here, here, here and here. That is just some of the entries on the first page of a Google search alone. Every one of those websites state that the 223 tire-related deaths are from 2009 to 2013, not 2014 alone as stated by Report Door.

According to the Large Truck and Bus Crash Facts 2014, there were 50 tire-related fatal crashes or 1.3% of truck-involved fatal crashes. Broken down specifically to “Tire Blowout or Flat” that number is reduced to 10 truckers involved in a fatal crash, which is 0.3%.

Go to page 103 of that report if you don’t believe it. So 50 fatal crashes in 2014 were tire-related and only 10 truckers had a blowout or flat, not 223 deaths from truck tire blowouts.

The above claim by Report Door is so beyond ridiculous that a claim that a third of all truckers have been abducted by aliens would have only been a lateral move in terms of absurdness. These numbers likely came from a 2013 study titled “Psychoactive substance use by truck drivers: a systematic review.” A review article compiles already published papers and reaches a conclusion based on the aggregate data.

In this case, the review article includes data from truck drivers around the world. Sure enough, the paper found the average frequency of self-reported alcohol consumption was 54.3%. However, that comes from a range of 10 percent in Pakistan truckers to 91% in Brazilian truckers.

Same deal with amphetamines, with an average self-reporting of 29.5% and ranging from 1% in Italy and 70% in Brazil. Cocaine use averaged at 1.8%, but the high end of 8 percent did come from a U.S. study – published in 1993. That study collected blood specimens from 168 fatally injured drivers.

It’s also worth mentioning that cocaine use was much more prevalent in the early 1990s compared with today. According to the Substance Abuse and Mental Health Data Archive’s National Survey on Drug Use and Health, 1.06% of respondents said they used cocaine in the past 30 days in 1993 compared with 0.69% in 2018. In fact, the last time that number reached above 1% was in 2006, when it had hovered above 1% since 2002. It dipped below 1% in 2001, a recession year. This is consistent with a report from the American Addiction Centers that states around 2007, “there was a steep increase in the price of cocaine, which coincided with the decline in demand.”

Report Door’s article sounds like something straight from an injury lawyer’s website. When Land Line reached out to Report Door to verify information, the following response was received: “If you want to publish a guest post, $160 per post is the price.”

It’s unclear if Steve Murphy, Report Door founder, actually wrote the above article. At the very bottom of the story, you will find this:

That hyperlink takes you to an Ohio personal injury law firm’s website.

Report Door’s story about truck crashes is poor journalism at best. At worst, it could be a paid post with the founder putting his byline on the story. Either way, unsuspecting web searchers may find it when looking for information about truck crashes. Hopefully, they find this too. LL 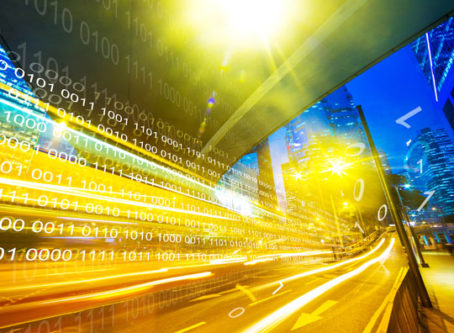 You might have heard about the controversy about the FCC taking the 5.9 GHz spectrum away from transportation. What does that even mean?

Dr. Michael Lemke’s research on long-haul truckers and COVID-19 draws from his experience as a former trucker driver himself. 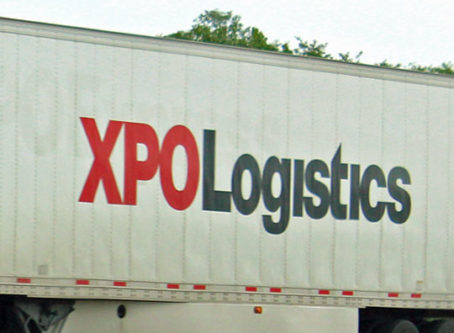 XPO delivers injustice, unions say, and they may have a point

A scathing, 22-page report from unions in 11 countries says XPO Logistics and its subcontractors go to great lengths to exploit workers. 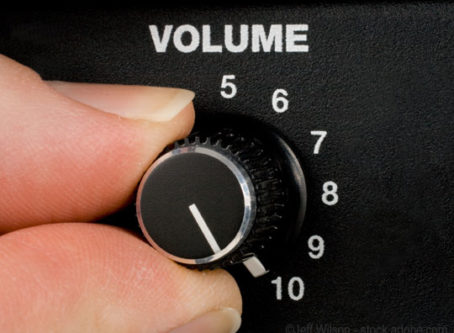 Truckers need to be louder on broker transparency petition

A lot of information was gleaned from FMCSA’s broker transparency listening session, including the fact that truckers need to get louder.