Report: Autonomous vehicles would cause more congestion in D.C.

Autonomous vehicles can speed up economic growth by improving issues with house affordability and mobility. However, it will come at the cost of more congestion on the roadways.

“There is no question that transportation will be different in the future, but forecasting these changes with certainty is all but impossible,” the report states. “Planning in the face of this ambiguity is challenging but must be tackled. The potential benefits are too great to miss, and the potential risks too large to ignore. Cities need to plan proactively, not simply react.”

However, government intervention can decrease travel times. Dedicated HOV lanes will reduce average trip times in 2045 to 29.4 minutes. Congestion fees have the potential for greater improvements with estimated average trip times of 25.3 minutes.

DDOT also concludes the number of vehicles needed to provide mobility could decrease by more than 20%. Long-term, that could result in more than 120,000 fewer vehicles needing to park in the nation’s capital. Consequently, that could mean fewer parking garages/spaces and lower housing costs. Land once used for parking can potentially turn into parks or other public-use facilities.

Another downside of autonomous vehicles is a loss of certain revenue.

For instance, more than $340 million in traffic citations could be eliminated as autonomous vehicles are not likely to speed, run red lights or park illegally, according to the report.

To make up for this lost revenue, DDOT suggests implementing congestion pricing on certain roadways. The D.C. government can also save money by eliminating costs associated with parking enforcement and testing new drivers for licenses.

Furthermore, autonomous vehicle technology can prevent severe and fatal crashes, which cost billions of dollars to the D.C. economy. According to the report, more than $1.8 billion is being spent on insurance, emergency response, lost productivity, legal proceedings, property damage and injuries and fatalities.

The report points out that there is no telling when “mostly and fully automated vehicles on urban roadways” will become a reality. Timelines among industry leaders and experts vary greatly. Time frames become even more unclear in regards to adoption by consumers and penetration of the automobile market.

“Cities and states cannot ‘wait and see’ how these technologies will play out – the potential impacts are too significant,” the report states. 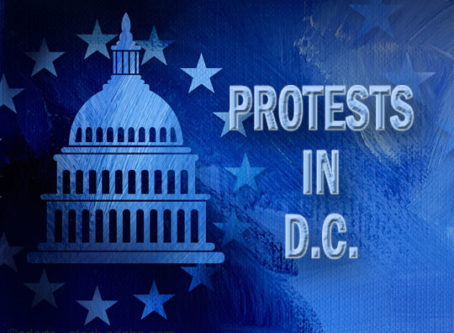 Protester speaks out on rates, brokers

A participant in the trucker protest who took his frustration to Washington, D.C., discusses the protests there; another trucker praises his company.