With the threat of a possible rail strike looming, there is now one certainty: No work stoppage will occur before Dec. 9.

In September, the White House announced that a tentative deal had been reached between U.S. railroads and their unions, avoiding a potential strike. The five-year contract agreement – which came on the heels of what were described as “marathon talks” – would need to be ratified by the 12 representative unions.

The unions agreed to not strike while those votes were being collected. On Nov 21, the ballots from the two largest unions were tallied.

The Brotherhood of Locomotive Engineers and Trainmen, with a 53.5% yes vote, elected to ratify the deal. However, SMART Transportation Division – which represents around 28,000 conductors, brakemen, yardmen and other workers – narrowly rejected the agreement, with 50.87% voting no. They, along with three other unions that previously rejected the contract deal, will now return to the bargaining table.

“SMART TD members with their votes have spoken, it’s now back to the bargaining table for our operating craft members,” SMART TD President Jeremy Ferguson said in a statement. “This can all be settled through negotiations and without a strike. A settlement would be in the best interests of the workers, the railroads, shippers and the American people.”

In total, eight of the 12 unions have voted to ratify the deal. The other four unions – which hold a combined membership of nearly 60,000 rail workers – are still opposed. Their decisions will determine the next steps because if one union decides to strike the other unions will honor the picket lines.

One of the unions against the proposed labor agreement is the Brotherhood of Railway Signalmen. The union had previously set a date of Dec. 5 as the end of their “status quo period” – the date an agreement needed to be reached prior to a work stoppage. The other unions had set that date as Dec. 9. On Nov. 22, BRS moved their date back to align with the three other unions still yet to ratify the contract.

The major sticking point for both BRS and the Brotherhood of Maintenance of Way Employees – two of the unions that voted against the agreement – is paid sick leave. Both have argued that railroad workers should receive 56 hours of paid sick leave, the same amount federal contractors are mandated to provide, but acknowledge they are willing to make a deal with less.

While the deal didn’t address paid sick leave, it did provide workers with a 24% raise over five years, an additional personal day, and caps on health care costs. Also included in the agreement were some modifications to the railroads’ strict attendance policies, allowing workers to attend to medical needs without facing penalties for missing work.

If there were a strike, the federal government would likely intervene to get trains running again.

The Railway Labor Act allows Congress to take a number of measures to “avoid any interruption of interstate commerce.” These measures could include imposing some version of the proposed contract or extending the status quo period.

A possible strike would affect more than just freight trains. Some Amtrak and commuter rail systems that operate on tracks owned by the freight railroads also would stop running. The Association of American Railroads estimates that a nationwide rail shutdown could cost the country $2 billion a day in lost economic output. LL

If the CVSA wants to limit a truck driver’s use of personal conveyance, FMCSA says it must first provide data of negative safety outcomes.

With changes looming for the trucking industry, a federal agency seeks public input on hazmat technologies and R&D efforts. 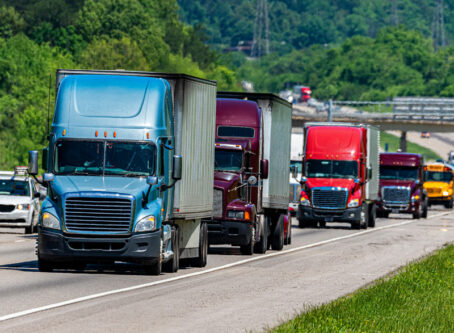 FMCSA is considering the idea of requiring all interstate commercial motor vehicles to possess a unique electronic ID. But why?