LLN (8/6/19) – A group that includes representatives of large carriers wants Congress to end the federal excise tax on new truck purchases. It sounds good, but is it good for small-business truckers, as they claim? Also, Suzanne Stempinski talks test drives and SuperRigs. We’ll have some important notices from the Land Line Now Community Bulletin Board. And Massachusetts’ governor wants to spend $18 billion on transportation.

From test driving Mack Anthems to paying a visit to some old friends at SuperRigs, Land Line Magazine’s Suzanne Stempinksi hasn’t let the dog days of summer slow her down. Terry Scruton gets the latest.

The Massachusetts governor has filed a five-year, $18 billion bond bill touted to invest in the state’s transportation system. Also, two northeastern state governors have signed into law infrastructure packages that include more than $675 million for roads and bridges. Mary McKenna gets the details from Land Line Magazine’s Keith Goble.

A group that includes representatives of large carriers wants Congress to end the federal excise tax on the purchase of new trucks. It sounds good, but is it good for small-business truckers, as they claim? Mark Reddig talks with Collin Long of OOIDA’s Washington, D.C., office. 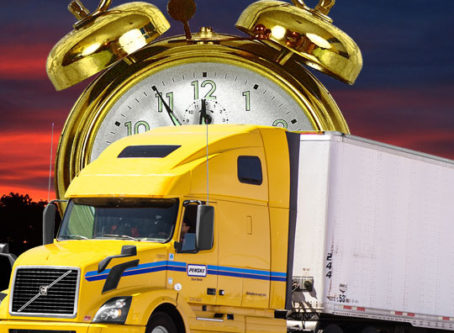 The changes to the hours of service formally published today, which starts a clock toward their effective date; also, progress continues on truck parking.

Scammers frequently target truckers in an effort to make a dishonest buck. We’ll cover some of the most common scams now. Also, more masks for truckers.