Private Harley Glassford’s son was 4, and his daughter only 10 months old, when he was killed in action on Nov. 29, 1944, as part of the campaign that saw Allied forces advance from Paris to the Rhine.

Glassford’s body was interred along with more than 10,000 American service members at the Lorraine American Cemetery and Memorial, located just outside Saint-Avold, France.

His granddaughter, Tracy Van Camp, works in OOIDA’s claims department. She shares the story of how she and a cousin made a recent journey to France to see her grandfather’s final resting place on tonight’s episode of Land Line Now on Sirius XM 146

Her grandfather was crossing a river near the German lines with other members of the 359th Infantry Regiment, 90th Infantry Division, when a barrage of machine gun fire erupted. 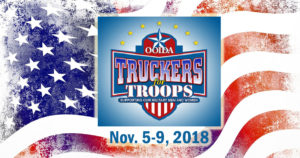 “A lot men were lost that day,” she said.

Tracy and her cousin flew to Paris in October, and journeyed about three hours east to Saint-Avold. When they arrived, they caught the cemetery’s groundskeeper just as he was finishing up for the day. When he found out the women had come all the way from America to pay their respects to their grandfather, he sprang into action.

“He looked up where the plot was for us and led us right to it,” she said.

She said he also pressed sand from Omaha Beach in Normandy into the lettering on the cross, which helped make her grandfather’s name stand out in the pictures Tracy and her cousin took to bring back to the rest of their family.

“It brought us to tears when he did that,” she said.

Tracy says her grandfather’s example of military service has continued in the family, as her dad, her brother, her three nephews and her own son are all veterans as well.

Tracy’s story about her grandfather Harley Glassford is part of the final episode of this year’s Trucker’s for Troops telethon on Land Line Now. The show airs at 6 p.m. Central and is available via podcast the following day at 5 a.m. Central.

The annual campaign, which runs through Nov. 9, generates funds in order to send care packages to service personnel in combat zones. Truckers for Troops also helps a variety of veterans’ facilities in the United States, including those that assist or provide housing for wounded, disabled or homeless service members.

During the campaign period, new and renewal memberships are discounted to the special price of $35 per year – a savings of $10 off the regular price. Ten percent of the amount paid during the campaign week will go toward the Truckers for Troops fund, and OOIDA will then match those funds.

To be a part of it, just call OOIDA’s main number, 800-444-5791. During business hours, let operators know you’re calling about Truckers for Troops, and they will transfer you to membership. Phones will be answered live, and the switchboards will stay open later than usual, so you can call until 7:30 p.m. CST.

You also can visit Jon Osburn at the Spirit of the American Trucker during the campaign and sign up or renew your membership.