OOIDA’s tour trailer stops in Indiana on the way to stops in Ohio and New York.

The Spirit of the American Trucker is scheduled Friday through Sunday, April 30 through May 2, to be at the Petro Stopping Center in Angola, Ind. It is on I-69 at Exit 357. The exit is north of the I-90/I-69 interchange.

The Angola Petro has parking for 200 tractor-trailers. The Iron Skillet dining room is open 6 a.m. to 10 p.m.

There has been a lot of buzz among truck drivers about lower-emissions vehicles, and it has unsettled some professional truck drivers.

“A lot of drivers wonder if they are going to be forced into getting an electric truck,” Ellis said.

There is reason to wonder. The Biden administration has taken steps toward stricter emissions standards, as Land Line’s Tyson Fisher reported recently. Also, states in the Northeast U.S. have collaborated on a cap-and-trade program to combat greenhouse gas emissions. In addition, the California Air Resources Board last year passed the nation’s strictest truck emissions standards.

In early 2020, Fisher wrote about the prospect of electric trucks, saying, “in the United States, electric trucks have taken a backseat. However, they are about to sit shotgun and possibly in the driver’s seat.” Read more here.

Interest in becoming an owner-operator

Some drivers stopping by The Spirit expressed interest in becoming owner-operators, Ellis reported.

The OOIDA Foundation has a series of videos that address some of the issues of a driver on getting your own authority, an important part of becoming an owner-operator. You can view the “Getting Your Own Authority” video series at OOIDA’s Business Education YouTube Channel.

To get a more rounded overview of what it takes to be an owner-operator, the OOIDA Foundation is bringing back its Truck to Success three-day course on Oct. 26-28. You can attend in-person or online. Read more about it here.

How did Angola get its name?

The name “Angola” in a circuitous manner is named for the African country of the same name.

It isn’t the source of the name of Indiana’s Angola, but there also is a famous maximum-security prison in Louisiana known as Angola. It was named for the place from where many slaves came from who worked on the plantation where the prison is now.

The Indiana Angola was settled by people who migrated from Angola, N.Y., according to a local historian. The New York community is the source of the name for the Indiana town.

The New York Angola was named for the African country, but again not directly, according to a local historian there.

Before the name “Angola,” the New York community was called Evans Station. Residents there applied to get a post office. At the same time the Quakers had a colony in Taylor Hollow, N. Y., and the post office there was called the Angola Post Office because the Quakers were supporting missionary efforts in the Portuguese colony of Angola in Africa.

When the Quakers’ post office closed in 1855, the federal government gave the Angola Post Office to the New York community of Evans Station but the post office name did not change. Eventually the community became known as Angola to match its post office and later was incorporated as such.

If you see OOIDA’s tour trailer, stop by and say hello. Ellis is looking forward to visiting about the Association’s activities and current issues. There are copies of Land Line Magazine to pick up there. You can join or renew your membership for $10 off the regular price there. Face masks are available for anyone with a commercial driver’s license at The Spirit. Also, drivers without medical insurance can get vouchers to get flu, shingles and pneumonia vaccines.

After Angola, The Spirit is scheduled to stop May 4-6 at the TA Travel Center in Lodi, Ohio, and then May 8-10 in Pembroke, N.Y. 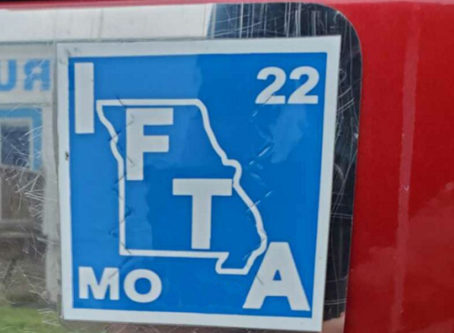