Big crowds are in store for Marty Ellis, skipper of OOIDA’s tour trailer, as he readies the Spirit of the American Trucker for the TopGun Largecar Shootout working class truck show in Rantoul, Ill.

Ellis and The Spirit are scheduled to be at the TopGun Largecar Shootout on July 23-25. The truck show takes place at the Rantoul National Aviation Center

A parade of lights is planned Friday evening.

On Saturday, a Kiddie Pedal Pull is planned as well as an engine brake competition and Dinosores Motorcycle Club bike show. Marty also should be able to find a beer garden on the grounds.

This is the 14th annual working class truck show. There are trophy classes and a wash and park exhibition. There is a truck wash on site and drivers can register their trucks for the show on site. Organizers say they average 175 trucks at the show.

The first 150 truck show participants are promised a dash plaque and event T-shirt, according to their website. Also, competitors vote for their favorite two trucks in the show, and those trucks will be on the event T-shirt the following year.

Ellis and OOIDA’s tour trailer – the Spirit of the American Trucker – are scheduled to be at several other truck shows this summer, including the following.

There was a little excitement at Brooklyn, Iowa, while Ellis and the Spirit of the American Trucker were there. On July 18, a driver backed over guy wire for a pole for the power.

The driver backed over a fence post before hitting the guy wire. Ellis reported. Traffic cones that Ellis uses around The Spirit were repurposed to warn motorists on the highway of the live power line that had fallen until the county sheriff’s department officers arrived on the scene. It took about an hour from the time Ellis called 911 until the power company came out and disconnected line on the highway. 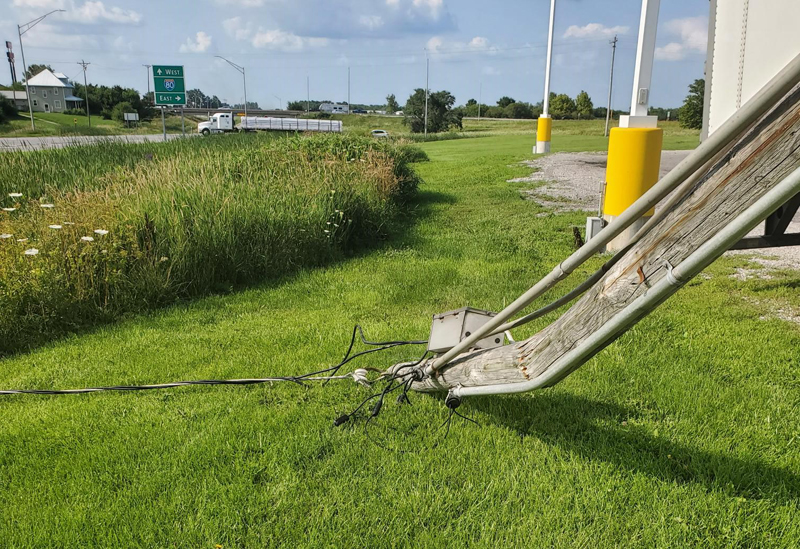 After Rantoul, The Spirit is scheduled to stop Aug 1-3 at the TA Travel Center in Troy, Ill., before heading to the Ault Truck Show in Ault, Colo., on Aug. 7.