The next scheduled stop for OOIDA’s tour trailer is in Bloomington, Ill., which is close to Normal and home of a product called “beer’s best friend.”

The Spirit of the American Trucker is scheduled to be at the Bloomington TA Travel Center on July 28-30. It is at Exit 160 from I-55/I-74 at the Route 9 junction.

The Bloomington TA has 160 parking spots for semis. The Country Pride full-service restaurant is temporarily closed, according to the TA & Petro website.

The Bloomington TA is dedicated to Gary Buchs, who was named a Citizen Driver in 2015.
The Citizen Driver Award recognizes professional drivers who earn public respect for the trucking industry through good citizenship, community involvement, health and wellness outreach, and leadership.

At the time, he had logged 2.25 million crash-free miles. He was awarded the Citizen Driver honor after stopping to help at a car collision, rescuing a woman in the vehicle by prying the car door open to pull her out. He has won at least 10 Landstar Star of Quality commendations and a Landstar Platinum Star.

There is a good chance that a Bloomington-made product is available at truck stops and in taverns you may have visited. Beer Nuts, bags of salty-sweet peanuts, are manufactured and packaged in Bloomington.

A go-getter named Edward Shirk took over a confectionary story in downtown Bloomington in 1937. One of the products was called “Redskins,” which were glazed peanuts with their red skins intact. Shirk began marketing them to taverns and liquor stores and changed the product name to Beer Nuts in 1953, according to a company history online.

Here’s a video on the history and production of Beer Nuts.

The Bloomington metropolitan area includes adjacent neighboring city Normal. It is home to Illinois State University, which used to be known as Illinois State Normal University. In 1867 the town was incorporated “Normal,” its name taken from the college. “Normal” schools or colleges trained teachers.

Normal was incorporated as a dry town, and intoxicating drinks were prohibited until the early 1970s, according to town history.

The next scheduled stop for The Spirit after Bloomington is in Morris, Ill. Here is the schedule. 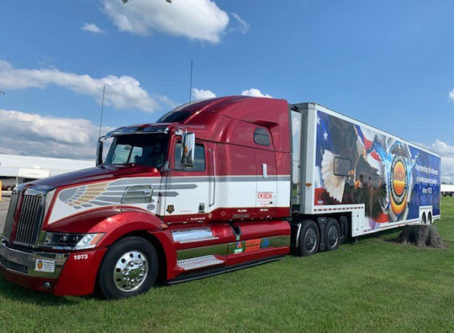