This weekend, the OOIDA tour trailer is scheduled to be part of the Big Rig Truck Show in Chippewa Falls, Wis.

This is the 10th annual Big Rig Truck Show. Admission for the public to the show is $5 for the entire weekend.

A light parade is planned in downtown Chippewa Falls at 9 p.m. Friday. The Big Rig Truck Light Show is planned at 11:30 p.m. Saturday.

“They’re going to vendors there, and food and music and, of course, trucks,” Ellis said. “That should be a lot of fun.”

Ellis has an idea for marking highway lanes, if anyone would listen.

In some urban areas, signs marking diverging interstate lanes don’t seem to line up. To make it clearer, why not paint the highway number on the pavement in the appropriate lane?

“Because some of those signs, they don’t really line up with the right lane … so these guys at the last minute need to get over, and when you’re going at highway speeds sometimes that turns into a not very good story.”

Ellis said the cost wouldn’t be a lot and it would be offset by not spending as much on emergency personnel.

If you see OOIDA’s tour trailer, stop by and say hello. Ellis is looking forward to visiting about the Association’s activities and current issues. There are copies of Land Line Magazine to pick up there. You can join or renew your membership for $10 off the regular price there. Face masks are available at The Spirit for anyone with a commercial driver’s license.

After the stop in Big Rig Truck Show, The Spirit is scheduled to stop at the TA Travel Center that bears Ellis’ name for being named Citizen Driver, the one in Rogers, Minn. He is scheduled to be there Aug. 24-25.

OOIDA, which started in 1973 to advocate for truckers, has been inducted into the American Trucking and Industry Leader Hall of Fame.

Shortages of plastic cups and lab technicians could leave some drivers in a bind when called for a random drug test, OOIDA warns.

Marty Ellis next takes the OOIDA tour trailer to Boise, Idaho, the hometown of Jon Osburn, Ellis’ predecessor as skipper of The Spirit. 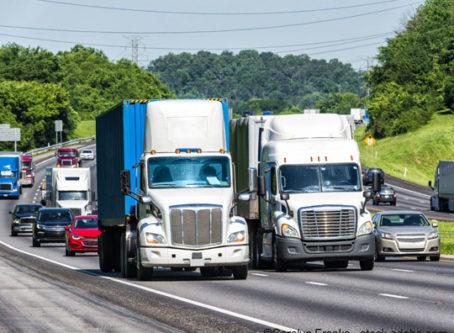