Determined to fight against a practice it calls unconstitutional, the Owner-Operator Independent Drivers Association is asking for a rehearing in its Indiana Toll Road lawsuit.

On March 23, OOIDA filed a petition asking for the full Seventh Circuit federal appeals court to rehear its case. On March 9, a three-judge panel of the Seventh Circuit Court of Appeals affirmed an Indiana federal district court’s ruling dismissing OOIDA’s lawsuit. The panel found that the tolls are not subject to Commerce Clause restrictions.

“We may suppose, as plaintiffs allege, that the $1 billion received for the 2018 toll increase was used for state purposes unrelated to maintenance of the toll road,” the court ruled. “Why should that matter? A state, like any private proprietor, can turn a profit from its activities.”

In a news release, The Cullen Law Firm, which is litigation counsel for OOIDA in the case, said that based on that reasoning, states in the Seventh Circuit can use highway tolls to raise unlimited funds for any state projects. However, in its petition for rehearing, OOIDA claims that this is not true for states in the Second and Ninth Circuits. Essentially, OOIDA is trying to rectify conflicting rulings between the Seventh Circuit and the Second Circuit, Ninth Circuit and even the Supreme Court.

The Seventh Circuit ruled that the Indiana Toll Road is considered a market participant, which is exempt from the Commerce Clause. That contradicts rulings in similar cases in the Second and Ninth Circuits, OOIDA claims.

The Second Circuit has expressly disagreed with a previous market participant decision made by the Seventh Circuit, stating that tolls are in fact subject to Commerce Clause limits based on Supreme Court precedent. Meanwhile, the Ninth Circuit has ruled several times that state/local government operations of interstate commerce do not qualify for exemptions as a market participant.

According to OOIDA’s initial complaint filed in January 2019, Gov. Eric Holcomb’s announcement of the Next Level Connections program would use $1 billion paid as consideration for the Indiana Toll Road Concession Co.’s right to extract increased tolls from motor carriers and truck drivers to fund a variety of projects throughout the state.

Those state projects included $100 million “to bring high-speed, affordable broadband access to underserved areas;” $90 million for hiking, biking and riding trails; $600 million toward the completion of I-69; $190 million for various highway projects; and $120 million to add more nonstop flights at the Indianapolis airport.

OOIDA claims that the Next Level Connections program shifts the burden for much of Indiana’s infrastructure costs from the citizens of Indiana to truck drivers who use the toll road. OOIDA also contends that Indiana can’t evade its constitutional obligations to users of the toll road by entering into a public-private partnership and allowing an entity other than the state to fix and collect the tolls. LL

Truck parking bill – what will it cost?

What does it cost to make progress on truck parking? A federal watchdog agency has an estimate. We’ll explain what it is and why it matters. 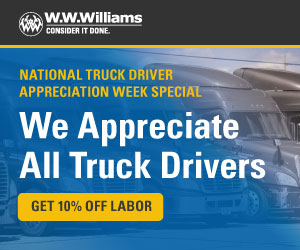