A third National Transportation Safety Board report involving a Tesla car crashing into a large vehicle tells a familiar story: Drivers are overestimating the capabilities of their autonomous vehicles. At least one group wants Tesla to recall its vehicles.

On Aug. 22, NTSB issued a report on a January 2018 crash in Culver City, Calif., that involved a 2014 Tesla Model S and a 2006 Seagrave fire truck. According to the report, Tesla’s Autopilot feature was a probable cause of the crash.

“The National Transportation Safety Board determines that the probable cause of the Culver City, California, rear-end crash was the Tesla driver’s lack of response to the stationary fire truck in his travel lane due to inattention and overreliance on the vehicle’s advanced driver assistance system; the Tesla’s Autopilot design, which permitted the driver to disengage from the driving task; and the driver’s use of the system in ways inconsistent with guidance and warnings from the manufacturer,” the report states.

Since the report, Tesla has defended its technology while at least one group has demanded the National Highway Traffic Safety Administration to issue a recall on Tesla vehicles.

At approximately 8:40 a.m. on Jan. 22, 2018, the 2014 Tesla was traveling behind another vehicle in a high-occupancy vehicle lane on southbound Interstate 405 in Culver City, according to the NTSB report. In California, the Tesla Model S is an approved vehicle for single-occupant use in HOV lanes. 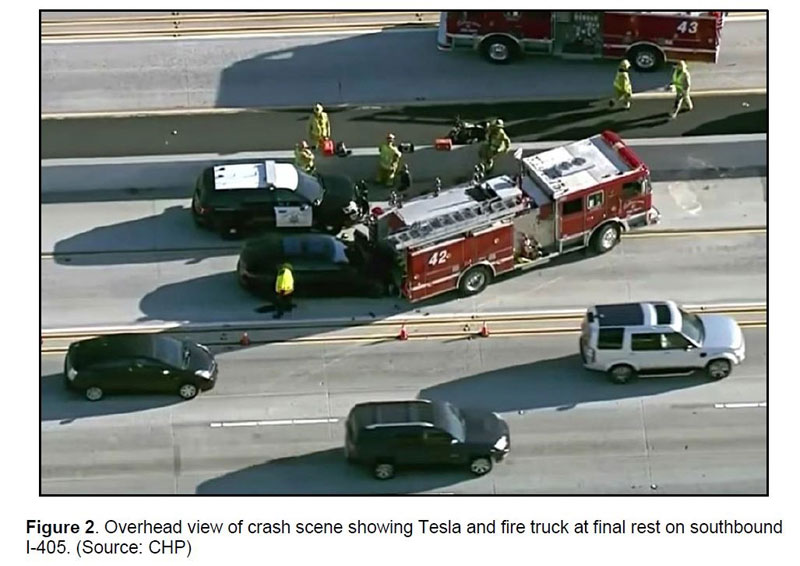 A separate crash that occurred about half an hour prior caused a California Highway Patrol vehicle to be parked on the left shoulder of I-405 southbound. A Culver City Fire Department truck was parked diagonally across the southbound HOV lane.

As the vehicle in front of the Tesla moved over to the right lane to avoid the fire truck, the Tesla continued moving forward in the HOV lane, accelerated and crashed into the rear of the fire truck. The Tesla was travelling at 31 mph when the crash occurred.

No on suffered injuries.

As is standard in most Tesla cars, the Tesla involved in the crash was equipped with advanced driver assistance systems, including Autopilot. Both the driver’s statements and downloaded data confirm that Autopilot was engaged at the time of the crash.

The 47-year-old Tesla driver had a valid California driver’s license. He had no history of traffic violations or crashes, according to the report.

The driver also denied using his cellphone at the time. A witness who was driving alongside the Tesla at the time stated that the Tesla driver appeared to be looking down at a cellphone or some other device. Records confirmed the Tesla drivers claim by revealing no talk or text use. However, those records do not indicate whether or not the cellphone was used with “manual manipulation” like using applications, according to NTSB’s report.

When the vehicle in front of the Tesla moved to the right lane, the Tesla driver reported that he noticed the lead vehicle move over but did not see the stopped fire truck. The Tesla driver told CHP officers that he was distracted by the car’s radio.

When interviewed by NTSB, the driver said, “Maybe I was changing the radio, maybe not.”

NTSB’s report reveals that the man had owned the Tesla for about six months. It was his first car with driver assistance technology. He bought the Tesla because of its Autopilot feature, the man told NTSB investigators.

The driver admitted that the name “Autopilot” does not accurately reflect the system’s capabilities, as the car does not fully drive itself. His favorite place to activate Autopilot is in carpool lanes where other vehicles typically do not change lanes, the reports states.

From leaving for his trip to the crash, the trip lasted about 66 minutes over 30 miles. Within that time, Autopilot was activated for 29 minutes. Of that time, hands were detected on the steering wheel for only 78 seconds. The system displayed a visual “PLACE HANDS ON THE WHEEL” alert four times in the final minutes of the crash trip, according to NTSB’s report. 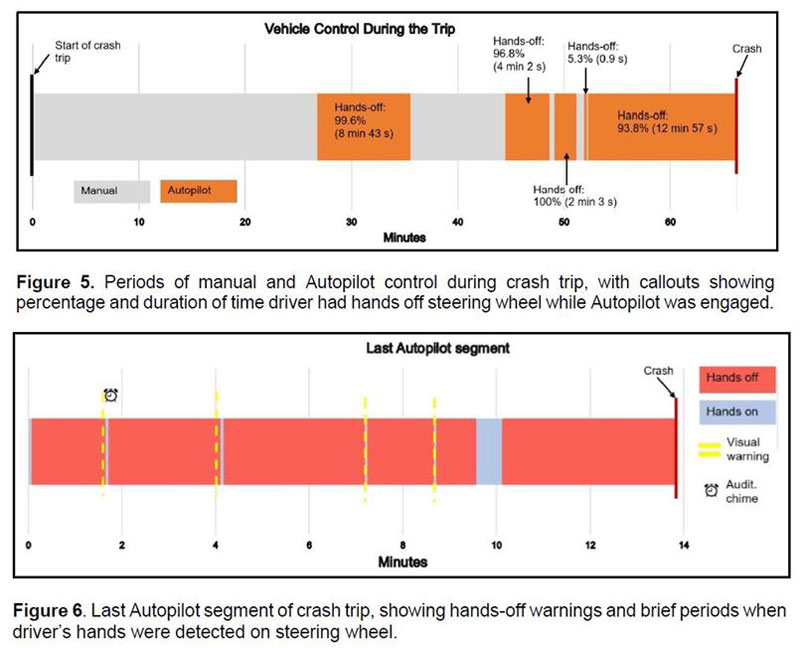 The automatic emergency braking system did not activate. According to the report, scenarios where a lead vehicle rapidly changes a lane to reveal a stationary vehicle present difficulties for driver assistance tech-equipped vehicles.

“While our driver-monitoring system for Autopilot repeatedly reminds drivers of their responsibility to remain attentive and prohibits the use of Autopilot when warnings are ignored, we’ve also introduced numerous updates to make our safeguards smarter, safer, and more effective across every hardware platform we’ve deployed,” according to a Tesla a statement. “Since this incident occurred, we have made updates to our system, including adjusting the time intervals between hands-on warnings and the conditions under which they’re activated.”

In its statement, Tesla referred to its quarterly Vehicle Safety Report. The latest report found one accident for every 3.27 million miles driven in which Autopilot was activated. Tesla owners driving without Autopilot recorded one accident every 2.19 million miles traveled. In the report, Tesla points out that data from the National Highway Traffic Safety Administration shows there is a crash in the U.S. every 498,000 miles.

Shortly after Tesla released its statement, the Center for Auto Safety called on NHTSA to issue a recall on Tesla vehicles.

“Last month, the Center for Auto Safety again highlighted for the Federal Trade Commission, Tesla’s deceptive use of the term Autopilot which encourages exactly the sort of overreliance seen in this crash,” the Center for Auto Safety said in a news release. “Autopilot has already resulted in avoidable deaths, injuries, and crashes, yet NTSB’s previous recommendations to NHTSA were met with silence, and the FTC has yet to act.”

When NTSB issues a final report, it makes recommendations on how to avoid similar crashes in the future. However, it is the job of NHTSA to implement those suggestions and make actions based on NTSB’s report.

“Put simply, a vehicle that enables a driver to not pay attention, or fall asleep, while accelerating into a parked fire truck is defective and dangerous,” the Center for Auto Safety stated. “Any company that encourages such behavior should be held responsible, and any agency that fails to act bears equal responsibility for the next fatal incident.”