One bill awaiting consideration on the Senate floor covers concern about large trucks parked on New York City streets or boulevards. S2761 would authorize a $1,000 fine for a trailer or semitrailer parked or left unattended overnight.

Parking of tractor-trailers or semis in the city, including residential areas, now is limited to three hours. Nighttime parking on a residential street is prohibited between 9 p.m. and 5 a.m.

However, violations of illegally parked tractor-trailers or semis on city streets does not carry a fine. Owners are responsible only for paying a $160 towing fee.

In a memo attached to the Assembly version, Assemblymember Diana Richardson, D-Brooklyn, wrote that “a $1,000 fine for tractor-trailers that are illegally parked overnight would help to encourage the legal parking of these vehicles and help maintain the quality of life in our city neighborhoods.”

The legislation was introduced one year ago. Senate lawmakers approved a bill introduced by Sen. Leroy Comrie, D-Queens, but it stayed in the Assembly Transportation Committee through the end of the 2019 session. For the start of year two of the two-year session, the bill was sent back to the Senate.

Another bill from Comrie would increase the fine for illegally parking a commercial vehicle in parts of the city.

S3215 would authorize $400 fines – up from $250 – for illegally parking a “tractor-trailer combination, tractor, truck tractor or semitrailer” in residential neighborhoods of New York City. Subsequent violations within six months would result in $800 fines – up from $500.

The focus of the legislation is Southeast Queens – between JFK and LaGuardia airports. Supporters say between pick up and drop offs commercial trucks park in residential communities. Neighbors complain about the vehicles as eyesores, environmental hazards, and noise makers.

Comrie acknowledges there are not enough places in the city to park large trucks, but added that current fines do not do enough to discourage drivers from violating the parking law.

“This is an inducement to make sure that truck drivers will make every effort to find safer places to park their vehicles and not clog residential streets with commercial vehicles.”

The Senate approved the bill during the 2019 session, but it did not advance in the Assembly. As a result, the bill was sent back to the Senate for the start of the 2020 session. S3215 is in the Senate Cities Committee. 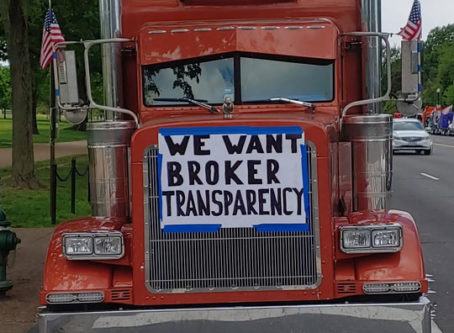 Truckers have been in our nation’s capital, protesting low rates and demanding action on broker transparency. So as things wind down, what are the results?

Tuesday’s primary in Missoula, Mont., included a question to collect a local gas tax to address local road needs. The diesel tax is not affected.

Talks underway at the Wyoming statehouse focus on a new method to fund transportation and multiple efforts intended to improve road safety.