Pennsylvania is looking into replacing its fuel tax with a mileage tax, which could save truckers a lot of money while costing passenger vehicle drivers more.

At the end of July, Pennsylvania’s Transportation Revenue Options Commission published its final report on a transportation funding proposal. Although traditional funding like tolls and registration fees are included in the short-term plan, the commission also proposes to replace the state fuel tax, among the highest in the nation, with a mileage tax, also referred to as a vehicle-miles-traveled tax or mileage-based user fee.

The transportation funding proposal is broken down into three phases: Phase 1 is for the first two years, Phase 2 includes the third and fourth years, and Phase 3 is funding mechanisms for year five and beyond. The mileage tax is the only revenue source for Phase 3 only and is not likely to begin until closer to year 10.

Truckers could save 33% on mileage tax

The commission’s proposal calls for an 8.1-cents-per-mile mileage tax on all vehicles, including tractor-trailers and passenger vehicles. According to the Pennsylvania Motor Truck Association, that could be a huge savings for truckers. The association calculates that the average trucker pays about 12 cents a mile in state taxes, a 33% increase from the proposed mileage tax. Assuming a trucker drives 100,000 miles a year, that’s a difference of nearly $4,000.

On the other hand, passenger vehicles would pay up to three times as much. According to the Federal Highway Administration, the average motorists drives about 13,500 miles a year. The Department of Energy estimates fuel efficiency of newer cars to be about 25 mpg. With a state gasoline tax at 58.7 cents, passenger vehicles drivers pay about $317 a year in state taxes. With the mileage tax, those motorists would pay a little more than $1,093.

According to the report, the commission wants to fill the bulk of Pennsylvania’s more than $9 billion state-level transportation funding gap with the mileage tax.

In fact, the proposal expects the mileage tax alone to generate nearly $9 billion, which is nearly 78% of total transportation funding revenue after Phase 3. That is even accounting for the more than $4 billion in lost fuel tax revenue.

Pennsylvania has a wide transportation funding gap despite having among the highest fuel taxes in the nation. According to the American Petroleum Institute, the state’s 75.2-cent state diesel tax comes second only to California (93.08 cents). Its 58.7-cent state gasoline tax trails behind only Illinois (59.56 cents) and California (66.98 cents). As vehicles become more fuel efficient and less reliant on fossil fuels, the state understands that the fuel tax needs to be replaced with something more relevant to today’s technology. 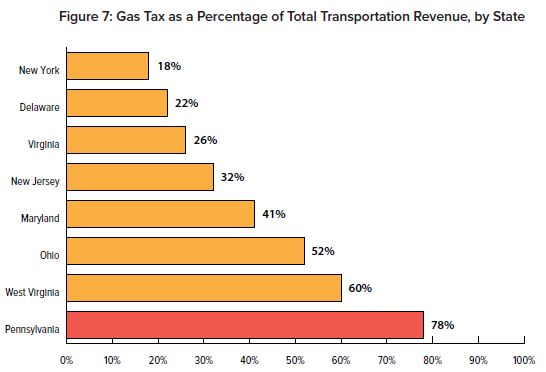 Although a 33% savings for truckers sounds great on the surface, the Pennsylvania Motor Truck Association remains cautiously optimistic. Rebecca Oyler, the association’s president, told Land Line that there are details to be concerned about, including data collection and privacy. Furthermore, a mileage tax is more feasible at the federal level rather than a patchwork of state vehicle taxes.

Oyler said that considering any mileage tax is up to a decade down the road, the association is more concerned about the items on the short-term funding list.

Revenue sources for Phase 1 include funding redirection, fees and taxes. Transfers from the Motor License Fund to the state police will stop, opening up more than half a billion dollars for transportation. However, other sources of funding will directly hit the pocketbook of motorists.

Pennsylvania is calling for a 100% increase for all vehicle registration fees.

Additionally, a vehicle lease fee would increase from 3% to 5%. A new $275 fee for electric vehicles would eliminate the alternative fuels tax. Furthermore, fees would go up for vehicle rentals, a new $1.10 per-trip fee added to ridesharing trips, and a new $1 fee on all deliveries to an endpoint in the state.

Phase 2 includes all of the above revenue sources with the addition of tolls. Specifically, corridor tolling and managed lanes (limited lane tolling) are in consideration. Pennsylvania wants to generate nearly $3 billion in toll revenue by the third and fourth year of the proposal.

Gov. Tom Wolf established the commission in March through an executive order. The commission must develop a comprehensive, strategic proposal for addressing the multimodal transportation funding needs of Pennsylvania. The more than $9 billion funding gap includes nearly $2 billion in basic unmet needs for the National Highway System, up to $3 billion to modernize the highway system and more than $1 billion for multimodal needs (transit, aviation, rail, bicycle, pedestrian, etc.).

In a decade, that state-level funding gap is estimated to be as high as $14.5 billion. LL