The 2020 Mid-America Trucking Show concert will feature a new venue and a familiar musician.

Jayne Denham, the Australian “country rock” singer who has been a mainstay at MATS’ Red Eye Radio stage in recent years, will headline the concert along with Larry Fleet.

The show will be at 7 p.m. Friday, March 27 at Fourth Street Live in downtown Louisville, Ky. Fourth Street Live is a 350,000-square foot entertainment and retail complex located on Fourth Street between Liberty and Muhammad Ali Boulevard. Traditionally, the MATS’ concert had been at the Kentucky Expo Center’s Freedom Hall.

Shuttles will be available at the Expo Center to transport attendees to Fourth Street Live and back, courtesy of Howe’s Lubricator. The shuttles will pick up attendees beginning at 6 p.m. in front of Freedom Hall and will run every 30 minutes until midnight.

A MATS attendee badge will serve as a ticket for the concert, which is presented by Mobil Delvac.

MATS will be March 26-28 at the Kentucky Expo Center in Louisville. Registration for MATS is free until Feb. 25 and can be done here.

As many of her songs contain a trucking theme, Denham has emerged as a familiar face at such trucking shows as MATS and the Great American Trucking Show.

Denham has never worked as a truck driver, but she said she grew up in Australia around family and friends who operated big rigs.

“I just love writing trucking songs to cheer on the truck drivers and an industry that we certainly can’t do without,” Denham told Land Line during a 2017 interview.

“I like to do my research. I want to make sure my lyrics are accurate. Truck drivers tell me the songs resonate.”

The lyrics for “Black Coffee & White Lines” echo that passion for trucking.

Born with gypsy blood pumping through my veins

But I grew up a child of the wind

Life’s all about what’s up ahead, not what you leave behind

Denham has never worked as a truck driver, but she said she grew up in Australia around family and friends who operated big rigs.

Other trucker-centric songs performed by Denham include “Addicted to the Diesel,” “Trucker Chicks,” and “Stacks.”

Touted as a blue-collar Tennessee native and singer-songwriter, Fleet released his debut album, “Workin’ Hard,” in November after touring with such country music legends as Willie Nelson.

Some of Fleet’s singles include “Lied About Love,” “Workin’ Hard,” and “Working Man.”

Tony Justice will perform for the concert’s “After-Party.” 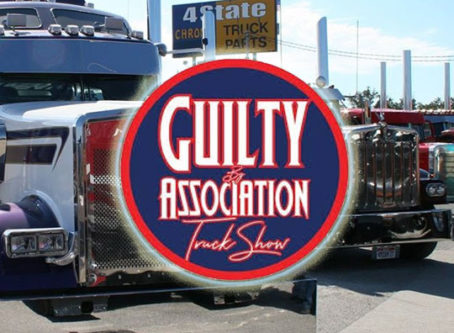 Citing concerns over the coronavirus, organizers for the Guilty By Association Truck Show are postponing the in-person show until 2021.

ATHS kicks off virtual truck show on May 28

The American Truck Historical Society’s National Convention and Truck Show had to move to a virtual format but has a record 1,455 entries from 10 countries.