Thank you to the drivers who took the time to comment on the hours-of-service exemption request from autonomous truck company Pronto.ai.

Pronto.ai requested a renewable five-year exemption from the 11-hour driving limit and the 14-hour driving window. The company wants drivers using Copilot by Pronto advanced driver assistance systems, the SmartDrive Video Safety Program, and “operating under certain other safeguards,” to be allowed to drive up to 13 hours in a 15-hour window. The notice was published April 20. The comment period closed May 20. There were 258 public comments. Nary any were in favor of the request.

It is heartwarming to see so many take the time to comment. Most of us figure someone else will comment, and we are not that articulate. I feel that way usually, to tell the truth. Yet these drivers and others got over themselves and took the time to collect their thoughts and comment. That is really what we need to improve trucking and protect professional truck drivers.

OOIDA filed comments on the issue too. Todd Spencer, president and CEO of the Owner-Operator Independent Drivers Association, was eloquent on the subject. Here is Land Line Media’s account, and here is the actual letter sent.

Spencer’s comments were stronger, however, because of the drivers and supporters who joined in by commenting. Some of the comments corroborated points Spencer made. Some comments brought up other related issues. Together, they made an impact that we can hope the Federal Motor Carrier Safety Administration will heed.

Some of the points made in OOIDA’s letter:

Below are some comments made by others on Pronto’s autonomous vehicle hours-of-service exemption request on the Regulations.gov website.

Gregory O’Neil expressed concerns about the autonomous vehicle driver being under similar stress and held liable if anything went wrong.

“The AI drivers need rest like the rest of us,” O’Neil commented. “They probably need to have more 2 (minimum) breaks during the day than the rest of us just to keep focused on task, where (the) rest of us are on task and have many things to pay attention to throughout the day.”

“These vehicles are nowhere ready to even be on the public highways performing work. The current state of highway trucks with all of the computers and sensors have made them less reliable and less predictable than older generations of comparable units. The manufacturers can’t even keep them reliable with systems such as emissions and lighting. For anybody to think that the technology is anywhere close to being ready for autonomous operations is insane,” he wrote.

Later, he added, “As someone who owns multiple units, as well as maintains them mechanically, and has driven them for nearly 2 million miles in all weather conditions, with many types of equipment and loads, I can for sure tell you that there is not now and never will be a number of sensors, hardware devices, software, algorithms, or any combination of the above that can replace the performance of the human operator.”

“It is hard enough on new drivers to adjust to the long hours that have to be put in behind the wheel, let alone a new driver that now instead of driving the vehicle down the road is now going to be sitting watching the world go by,” he said in his comments.

He said mega carriers are the companies most likely to adopt this technology, and they already put inexperienced drivers behind the wheel of tractor-trailers.

FMCSA should expect drivers in the cab of autonomous vehicles to be much less attentive to driving conditions, warned Scott Jordan.

These are only a few of the many comments posted. There were many cogent and thoughtful remarks made. Thanks again to everyone to stepped up. I believe you helped make a difference. We’ll see when FMCSA rules on the exemption request, but I am certain the arguments against it were stronger because they came from so many of us. 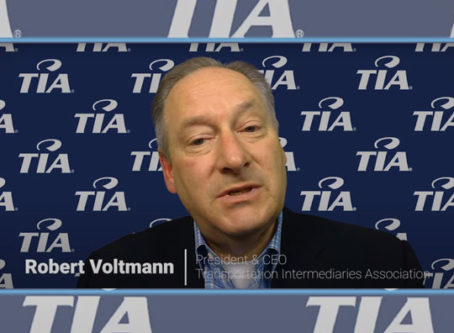 In a ferocious, ethically dubious, and sometimes goofy campaign against business transparency, TIA is showing just how necessary transparency is.