Longtime owner of White’s, Lee Hi truck stops on I-81 has died

Bobby Berkstresser, who until recently owned White’s Travel Center and Lee Hi Travel Plazas on I-81 in Virginia, has died.

Berkstresser, 71, died April 14, according to an obituary. A funeral service was the afternoon of April 20.

Berkstresser purchased the Lee Hi Travel Center in 1981. He purchased White’s Travel Center in 2010. He was named to the truck stop operator trade association Natso Hall of Fame in 2018. Berkestresser was chairman of Natso in 2011.

The truck stops were not his first businesses. He had attended Danville Community College while working at Westinghouse and working part-time at Midway Machine, according to his obituary. He came to own his first business 1975, when he and his cousin opened Auto Parts and Supply.

The previous owner of Lee Hi Travel Plaza approached Berkstresser about taking over the truck stop and was willing to finance the purchase.

“I started on a Saturday morning. I didn’t sleep for three days I was so wound up. We did $660 the first 24 hours I was in business,” Berkstresser said when interviewed in connection with being named to the NATSO Hall of Fame. “There were eight employees there.”

When he sold his truck stops, hundreds of people were employed in them, Natso reported.

Until 2017, Berky’s Restaurant at the Lee Hi Travel Plaza had earned a reputation for good food.

It was featured on the Travel Channel in 2012 and on “Extreme Truck Stops in 2008, according to Natso.

“All day every day, Berky’s in Lexington, Va., dishes out simple, delicious American fare,” reads a TravelChannel.com review. There is a slide show showing food and the menu.

White’s Travel Center was known as “the East Coast’s largest travel center.” Berkstresser had significantly remodeled and expanded the White’s since purchasing it. The travel shop was built in 2014.In 2015, White’s opened retail space for a barbershop, a Popeye’s franchise, a Subway franchise, a Caribou Coffee franchise, and one of the first pharmacies in a travel center in the U.S.

In 2019, a new medical facility was built and an urgent care clinic was opened. That year, Nathan’s Famous Express opened. Quaker Steak and Lube Restaurant opened in September 2020.

During the early days of the coronavirus pandemic, Berkstresser turned his dine-in restaurant to takeout food, reports Natso in a remembrance. He boxed and sold hundreds of Easter dinners for drivers. 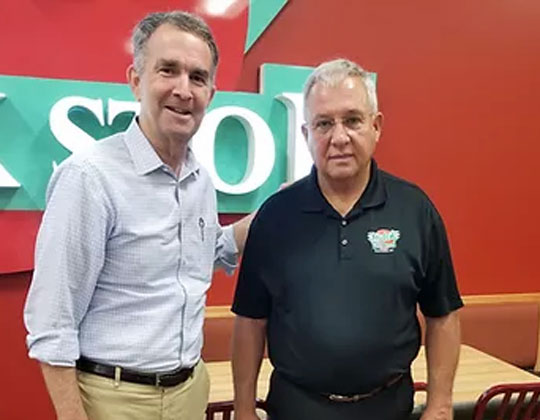 Virginia Gov. Ralph Northam visited White’s Travel Center in 2021 to thank the medical staff at the health care clinic at the truck stop for their work offering COVID-19 vaccinations.

He was survived by his wife of 26 years, Sue; three children; and three grandchildren. LL