The total number of load posts to DAT MembersEdge rose almost 5% last week, signaling a late-month push by shippers and relatively strong truckload volumes overall. This is the second straight week of increases in load posting activity to the MembersEdge network.

These are seven-day national average broker-to-carrier rates excluding fuel surcharges for the week of April 24-30:

Rates are based on transaction data from shippers, freight brokers, and motor carriers last week and not the “asking price” the broker offers on the load board. Ultimately, the rate you negotiate is up to you. 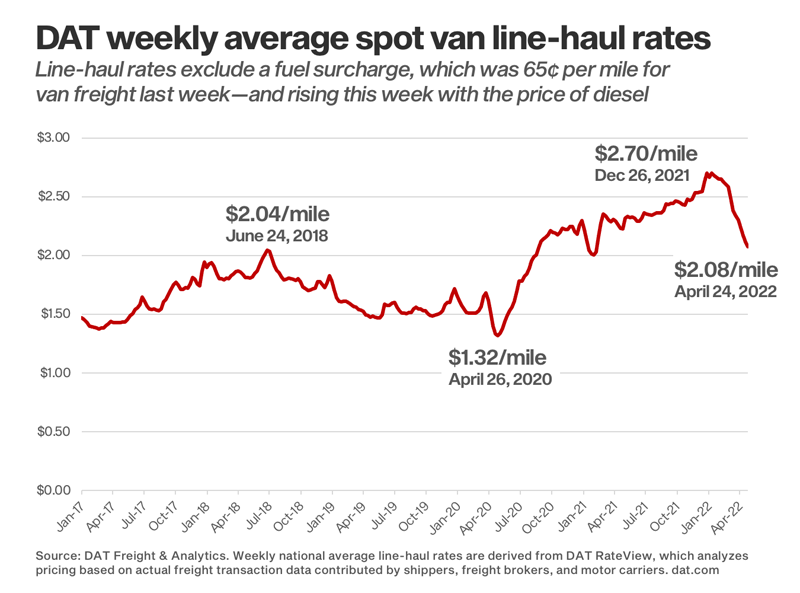 Looking at spot-market demand for each equipment type:

Spot rates on the load board are “all-in” rates: a line-haul amount and a surcharge wrapped into one. Last week, fuel surcharge calculations in DAT’s RateView pricing analysis tool were 65 cents a mile for van freight; 71 cents for reefers; and 78 cents for flatbeds. Surcharges will go up this week after the U.S. Energy Information Agency said the national average benchmark diesel price increased almost 35 cents to $5.51 a gallon.

Approximately 84% of U.S. adults are expected to spend a record $31.7 billion this coming Mother’s Day, an increase of $3.6 billion from 2021’s record spending, according to the National Retail Federation. Whichever way you look at it, $31.7 billion is a lot of freight, and using NAICS codes to convert retail revenue into tons, it equates to around 132,000 truckloads using $12,000 a ton as a rough guide.

In the two weeks leading up to Mother’s Day on May 8, an average of 70 truckloads of flowers per day will head north out of Miami, where just three large carriers handle 80% of all flora volume, much of it flown in from South America. The remaining volume is picked up from Miami by smaller fleets and owner-operators on the spot market. Load posts were up 15% week over week last week in Miami and reefer spot rates rose 17 cents to an average northbound spot rate of $1.95 per mile excluding fuel. More volume and higher spot rates are expected this week for last-minute loads. It’s one of the rare opportunities during the year where there’s freight to choose in South Florida.

For the latest market updates, visit DAT.com/blog or tune in to Dean Croke on Land Line Now on Wednesday. Dean is DAT’s principal industry analyst and owner of The Grumpy Pete, a Pete 379 show truck and working rig with its own Instagram feed: @thegrumpypete.

DAT MembersEdge is a service provided exclusively to OOIDA members at a discounted price. LL