Lincoln Industries kicks off the RATical road to SEMA 2018

What’s better than a free lunch? A free lunch with some world-class RATical rat rods and their build teams.

World-class rat rods began staging the starting line of RATical Rod Build-off Drive-off in Lincoln in 2016. This year, seven teams from all over the world had from Jan. 1 to the end of October to complete their build. The drive-off portion of the competition is a 1,400-mile journey from the cornfields of Nebraska to Las Vegas, Nev. It takes the caravan six days to complete. The finishing line at the Las Vegas Convention Center coincides with opening day of the 2018 Specialty Equipment Market Association Show on Oct. 30. The builds will then be on display at SEMA to promote their sponsors.

After attending SEMA in 2015, Bryan Dagel realized rat rods were getting attention at the show, but not really taken seriously. Fellow builders Jason Groulx, Patrick Wilson, and Sam Hard brainstormed with Dagel. Together, they helped Dagel create an event to highlight the business end of building, driving and showing a serious rat rod class.

Enthusiasm for the 2017 event was dampened with the sudden passing of Jason Groulx in a mid-August boating accident. Although emotionally crushed by the loss, Dagel knew Jason would want the event to continue. So he carried on.

The group has grown more like a family than competitors. A passage from the tribute to their brother and co-founder Jason Groulex on the website reads, “Jason believed the Rat Rod community to be his family, the people he connected with the most.”

There’s no doubt Jason would have been under Belgium’s Cobblestone Customs build Monday night, helping with last minute issues. Everyone in the group helps each other make the trip. When Wesley de Saedeleer and crew lost steering four miles from the starting line, crews from every build team worked to set it right. Cobblestone Customs was able to set off with the pack, because the pack takes care of each other.

George Parker III talks with Charlie Pacheco about the build.

Build teams from as far away as South Africa gathered Monday to show off their work. Fredrick Viljoen, also known as “Freaky Freddy,” shipped his safari wagon over from South Africa several weeks ago. One-of-a-kind details like hand-beaded door panels, crafted by Zulu tribeswomen, really set this build apart.

Frederick takes his turn at the mic with George.

Chris Fiffie of Big Rig Videos documented the event. Continuing coverage and daily updates from the road can be followed here and here. 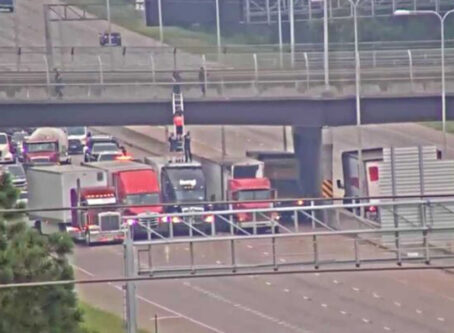