Left lane use is a constant area of focus from state to state. Legislators around the country are attempting to address the issue.

An Arizona House bill would require signs to be posted to alert travelers about the state’s left lane rule.

Sponsored by Rep. Gail Griffin, R-Hereford, HB2590 would require the Arizona Department of Transportation to erect signs on state highways and routes notifying the driving public of the state’s lane law.

Advocates have pointed out signage already is posted on roadways that include Interstate 17 alerting truck drivers to left lane restrictions.

An ongoing effort in the Delaware General Assembly would revise the state’s rule governing left lane use.

One provision in the bill singles out large trucks. Specifically, trucks weighing at least 10,000 pounds would be prohibited from using the left-hand lane along a stretch of state Route 1 except to pass, turn or exit a highway.

An Iowa Senate panel has taken the first step toward revising the state’s rule on left lane use.

The Senate Transportation Committee voted on Jan. 21 to advance a bill that targets drivers who hang out in the left lane. Specifically, SF389 would specify that drivers who “reasonably should know” another vehicle is attempting to overtake the vehicle would face escalating fines for failure to merge right.

In the most recent fiscal year there were 37 violations in Iowa for failing to yield to a passing vehicle, according to a fiscal note attached to the bill.

The bill would authorize $100 fines for simply failing to move right. If inaction results in serious injury, violators would face $500 fines and/or a 90-day driving suspension. Incidents that result in death could carry a $1,000 fine and/or loss of driving privileges for 180 days.

Rep. Gary Worthan, R-Storm Lake, has a family trucking business. He previously said he has experienced drivers of all vehicle types create a rolling roadblock by not completing a pass and getting back into the right lane in a reasonable amount of time.

Left lane use is under review once again at the New Hampshire statehouse. The latest effort focuses on trucks in the left lane.

OOIDA says that truckers are first-hand observers of the negative consequences of misguided traffic laws. Mike Matousek, OOIDA manager of government affairs, said while perhaps not intended, efforts to restrict trucks from certain lanes pose serious challenges for truckers and jeopardize the safety of the traveling public.

A 2018 state law targeted left-lane laggards. The law specifies that anyone driving slower than the normal speed of traffic must stay in the right lane, except to pass or turn left.

A new bill, HB1383, would prohibit commercial vehicles with three or more axles from traveling in the left lanes of an interstate or turnpike. Specifically, the bill would limit truck travel in the left lane from 6 a.m. to 9 a.m. or 4 p.m. to 7 p.m.

Exceptions would be made for trucks moving left to accommodate merging traffic and preparing for a left turn.

An effort underway in the Oklahoma House attempts to clarify the state’s left lane rule.

The Sooner State limits left lane use on roadways with at least two lanes of traffic in the same direction. State law specifies that drivers are required to stay to the right unless passing or preparing to turn left, or for safety measures.

Sponsored by House Speaker Charles McCall, R-Atoka, HB4047 would revise wording to specify that vehicles would be in violation of the law when traveling on highways.

The bill awaits assignment to committee in the regular session that begins Feb. 3.

One South Carolina House bill is intended to further discourage slowpokes hanging out in the far left lane of highways.

H4835 would attach a two-point violation for improper driving in the left lane. The South Carolina Department of Transportation would also be responsible for posting signage along interstates to alert travelers of the law.

The bill is in the House Education and Public Works Committee. 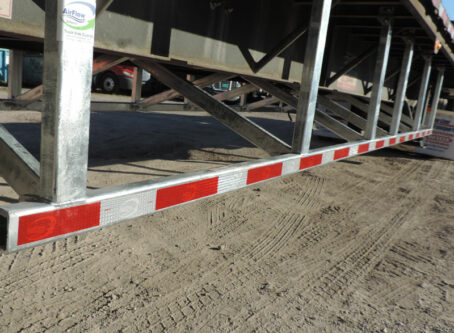 A transportation safety bill headed to the Massachusetts governor’s desk includes a mandate for side underride guards for certain trucks.