Although Tropical Storm Marco came to a sudden halt before making landfall, Hurricane Laura is poised to reach Category 3 status when it reaches Louisiana and Texas, likely causing major disruptions.

Two storms are making their way through the Gulf of Mexico, both on track toward Texas and Louisiana. Tropical Storm Marco was on pace to make landfall near the two states. However, the storm slowed down significantly and downgraded to a post-tropical cyclone on Tuesday morning.

Marco’s dissipation provides some relief to the region as Hurricane Laura moves toward the area directly behind it. As of Tuesday morning, Laura reached Category 1 status with sustained winds of 75 mph. Forecasts project Hurricane Laura will reach Category 3 status by 7 p.m. on Wednesday, Aug. 26, just as it reaches land between Texas and Louisiana. 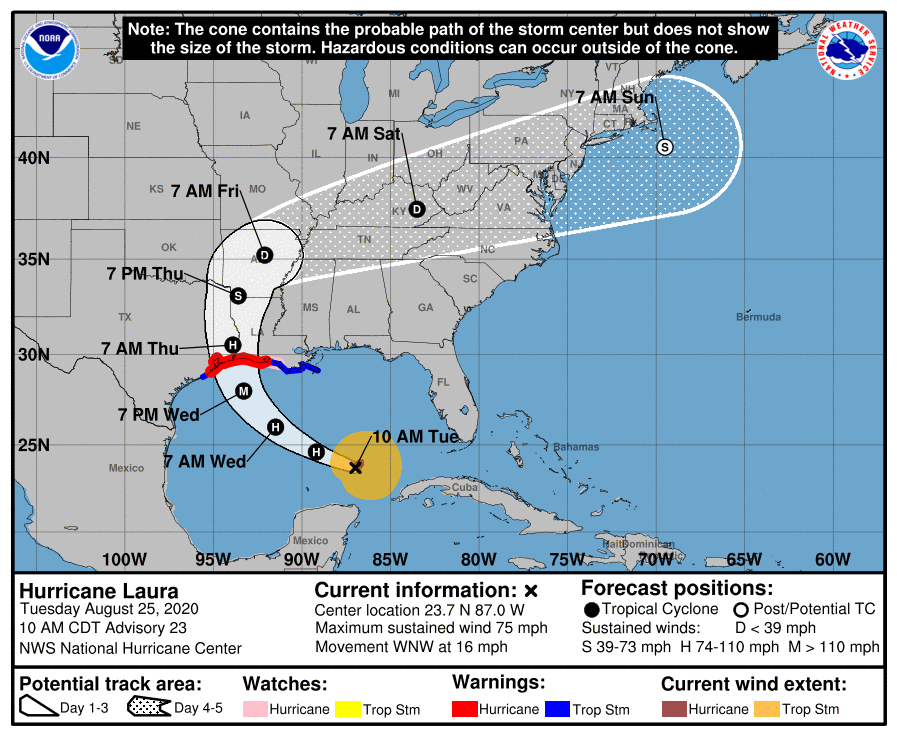 Evacuation lanes set up in Texas ahead of Hurricane Laura

The following evacuation orders are in place as of Tuesday morning:

On Aug. 21, Gov. John Bel Edwards declared a state of emergency as both storms were expected to hit Louisiana. The declaration is in effect until Sept. 20 unless terminated sooner. Two days later President Trump approved of the governor’s request for federal assistance.

“We’ve never seen two hurricanes hitting the same state back to back within 48 hours, as is anticipated in the coming days in Louisiana,” Edwards said in a statement. “At the same time, we are responding to the COVID-19 pandemic, which makes the prospect of evacuations, search and rescue and mass sheltering complicated and difficult. We will work alongside our federal and local partners to manage this unique and challenging group of disasters.”

Louisiana Department of Transportation Secretary Shawn D. Wilson issued a separate state of emergency on Monday. That declaration suspends state size and weight restrictions for commercial vehicles providing for relief efforts. Tolls on the LA 1 Toll Bridge from Leeville to Grand Isle and Port Fourchon have also been suspended.

The following mandatory evacuation orders are in place due to Hurricane Laura: