The U.S. economy is slowly reopening but still not back to normal levels. Recent numbers from the Bureau of Transportation Statistics reveals that travel during the Fourth of July holiday was down significantly compared with this past year.

However, there was an uptick in travel on July 4 this year, deviating from travel patterns in 2019. Last year, travel dropped on July 4. Although the uptick still kept travel below last year’s stats, it moved the numbers closer to what Americans traveled a year ago. 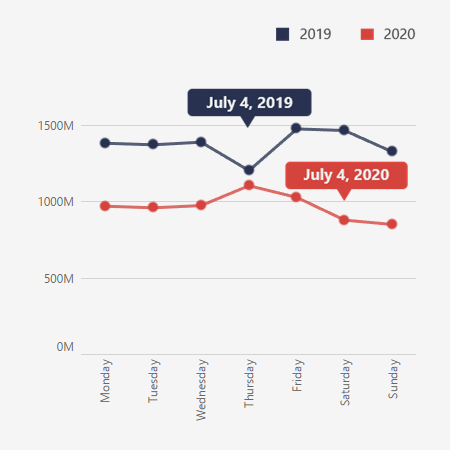 The drop in Fourth of July travel was largely the result of local trips, which is defined as travel under 50 miles.

Long distance trips remained mostly stagnant relative to short distance trips. The number of average daily trips of 50-100 miles were nearly identical compared to last year. However, there were nearly 2 million fewer trips of more than 500 miles. On the other hand, there was a slight increase in trips of 250-500 miles. Additionally, there was a spike in average daily trips of 100-250 miles. This year, Americans took 9.6 million trips with a range of 100-250 miles, about 2 million more than last year.

Consistent with travel numbers, more people stayed at home during the Fourth of July week. A quarter of Americans stayed home this year, compared to 20% last year. On average, more people on the West Coast stayed at home compared to rest of the country. However, New York and Washington, D.C., reported the highest average daily percent of people staying at home at more than 30%.

The Oregon DOT has made it easier for motorists to find out which highways are closed due to wildfires with a dedicated webpage.