The Federal Motor Carrier Safety Administration announced on Friday, Oct. 19 that it renewed an exemption for CRST Expedited that allows the Cedar Rapids, Iowa-based trucking company to have student drivers run team with a commercial driver’s license holder.

Current regulations require a CDL holder with the proper class and endorsements to be seated in the front while a commercial learner’s permit holder is driving on public roads or highways. The exemption allows student drivers who passed the skills test but have not yet received the CDL document to drive a CRST commercial motor vehicle accompanied by a CDL holder “who is not necessarily in the passenger seat.”

CRST’s previous exemption from the regulation was granted for two years on Sept. 23, 2016. The new exemption is effective for five years until Sept. 24, 2023.

“FMCSA has analyzed the exemption application and the public comments and has determined that the exemption, subject to the terms and conditions imposed, will achieve a level of safety that is equivalent to, or greater than, the level that would be achieved absent such exemption,” the agency wrote.

CRST says the exemption allows the company to “foster a more productive and efficient training environment by allowing commercial learner’s permit holders to hone their recently acquired driving skills through on-the-job training and to begin earning an income right away. “

Through the end of 2017, CRST reported zero crashes to FMCSA involving drivers using the exemption.

FMCSA has granted similar exemptions to such fleets as C.R. England and New Prime.

The Owner-Operator Independent Drivers Association has spoken out against such exemptions.

During the public comment period for CRST’s request, Jarrod Hough, an OOIDA member from Indianapolis, questioned the logic.

“Why would FMCSA even consider this? The roads and traffic are bad enough already,” Hough wrote. “Permit holders don’t have the experience to operate a commercial vehicle by themselves without the trainer sitting upfront and in the passenger seat. That is what a trainer is for, to teach and give guidance to the student. Not to be in the sleeper berth while the student is left alone.” 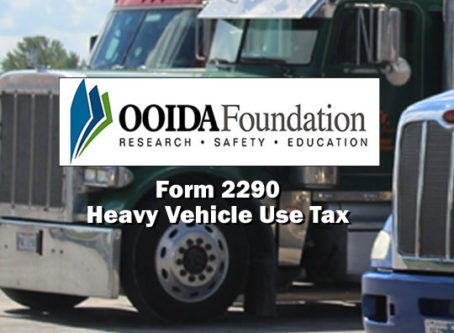 The OOIDA Foundation recently released a video explaining Form 2290 as part of its “Getting Your Own Authority” series to educate drivers.