Flooding can render one quarter of U.S. infrastructure, roads inoperable

While Congress continues struggling to pass an infrastructure bill, a new report suggests that nearly a quarter of all critical infrastructure and roads could become inoperable due to flooding.

On Monday, the First Street Foundation, a nonprofit research and technology group analyzing climate risk, released its first flood resilience report titled “The Third National Risk Assessment: Infrastructure on the Brink.”  The report calculates flood risks over 30 years for every city and county in the contiguous United States.

According to the report, about 25% of all critical infrastructure is at risk of becoming inoperable as a result of flood damages. That represents about 36,000 facilities. The First Street Foundation recognizes “critical infrastructure” as including airports, fire stations, hospitals, police stations, ports, power stations, Superfund/hazardous waste sites, water outfalls and wastewater treatment facilities.

Additionally, flooding can render around 23% of the nation’s roadways impassable, which is about 2 million miles of roads.

Within the next three decades, the foundation expects that percentage to increase to 26%, or another 200,000 miles of roads.

The report analyzed three other categories: 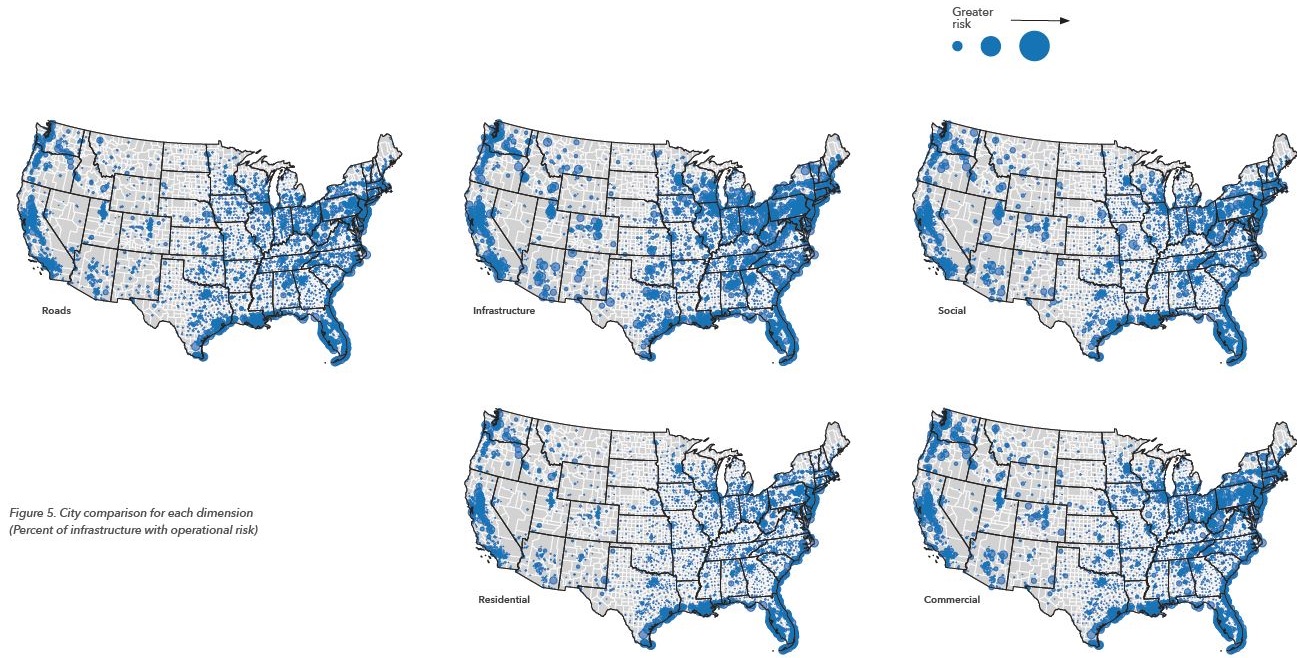 “As we saw following the devastation of Hurricane Ida, our nation’s infrastructure is not built to a standard that protects against the level of flood risk we face today, let alone how those risks will grow over the next 30 years as the climate changes,” Matthew Eby, founder and executive director of First Street Foundation, said in a statement. “This report highlights the cities and counties whose vital infrastructure are most at risk today, and will help inform where investment dollars should flow in order to best mitigate against that risk.”

Geographically, the most vulnerable counties are southeastern coastal areas and the Appalachian Mountain region. About 85% of the counties where physical infrastructure are most at risk are in four states: Louisiana, Florida, Kentucky and West Virginia. The five most at-risk counties include Cameron Parish, La.; Monroe County, Fla.; Terrebonne Parish, La.; Hyde County, N.C.; and McDowell County, W.V. In those counties, nearly 100% of all property within all five categories are at operational risk due to flooding.

By city, the pattern is similar, with coastal and Appalachian areas at greater operational risk. The five most at-risk cities are Metairie, La.; New Orleans, La.; Cape Coral, Fla.; Stockton, Calif.; and Fort Lauderdale, Fla. Nearly every single piece of property in Metairie and New Orleans is at risk.

Overall, most of the nation’s infrastructure will likely experience an increase in flooding risk over the next 30 years.

Other than coastal regions, the Northwest will experience a greater increase due to more precipitation, storm runoff and snowmelt. The report anticipates a lower increase in risk within the landlocked central part of the United States. However, large swathes of that region may possibly see a decrease in risk.

The First Street Foundation’s report goes on to analyze the flood risk to infrastructure in all 48 contiguous states, including breaking all five categories down by county and city. To view the full report, click here. LL

The use of speed cameras to enforce vehicle speeds in highway or street work zones continues to be discussed at the Michigan statehouse.

Truckers for Troops raised $32,300 for military veterans during its 2021 campaign. This was the 15th year of the fundraising initiative.