The Texas Department of Transportation must put its North Houston Highway Improvement Project on hold as the Federal Highway Administration launches a civil rights investigation regarding the project’s potential impacts.

On June 14, FHWA sent TxDOT a letter that puts the department on notice for moving forward with its North Houston Highway Improvement Project despite being told to stop. In March, FHWA told TxDOT to put the project on pause as it looks into civil rights and environmental issues expressed during the public comment period.

“There are numerous environmental and civil rights issues involved and FHWA believes that no further actions be taken on this project that might impact our Title VI investigation and any proposed remedies should the agency find that a violation has occurred,” the letter states.
Although finding the pause “unfortunate,” TxDOT appears willing to cooperate.

“We have received the letter from the FHWA and are reviewing the FHWA requests,” Bob Kauffman, TxDOT chief communications officer, told Land Line in a statement. “It’s unfortunate there is an expanded delay on this project, but TxDOT remains fully committed to working with FHWA and local officials on an appropriate path forward. We know that many in the community are anxious to see this project advance. This FHWA action indefinitely suspends key steps for this project.”

Planning for the project began about 17 years ago. In 2017, TxDOT introduced its finalized plans for the project. The plan is a reconstruction, expansion and widening of Interstate 45 from the North Sam Houston Tollway, better known as Beltway 8, to downtown Houston. 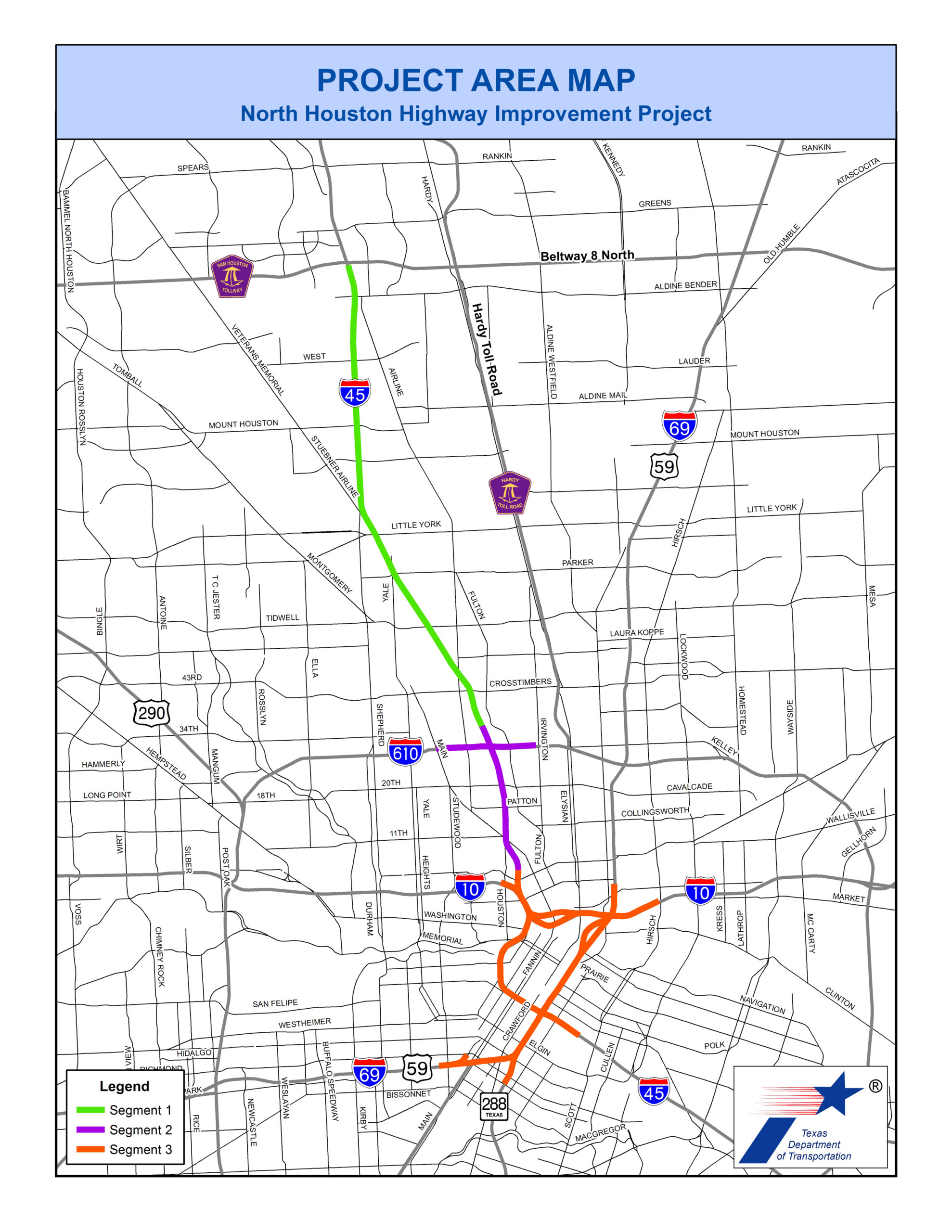 The North Houston Highway Improvement Project is broken down into three segments. Segment 1 extends from Beltway 8 to Interstate 610, while Segment 2 extends from I-610 to Interstate 10. Segment 3 includes portions of I-10, I-45, US-59/I-69 and state Route 288 that compose the loop of freeways surrounding downtown Houston.

TxDOT claims that traffic will  increase significantly over the next 20 years. Widening I-45 will preemptively keep up with traffic demand, reducing congestion.

According to TxDOT, the North Houston Highway Improvement Project is one of the largest infrastructure projects Houston will see in a generation. It is projected to cost about $7 billion.

Harris County vs. the state

The North Houston Highway Improvement Project has gone through several delays since it was announced. Affected residents in Harris County are trying to stop the project from happening, claiming it violates Title VI of the Civil Rights Act of 1964.

In March, Harris County filed a civil rights lawsuit against TxDOT in a federal court. According to the complaint, the county claims the North Houston Highway Improvement Project ignores all issues raised by affected residents during the public comment period. However, Harris County understands the need and supports the project in principle, it opposes the method by which the state is addressing infrastructure needs.

During a news conference announcing the lawsuit, Harris County Judge Lina Hidalgo countered TxDOT’s claims, arguing transportation projects in the area have caused more flooding and exacerbated traffic while not providing sufficient public transportation. Hidalgo said the state is maximizing how many cars it can put on the road rather than maximizing the ability for people to get to where they need to go.

“We for decades been prioritizing highways over the ability to get around,” Hidalgo said. “We need to be smarter about this. The way we build should not focus on what is easiest for cars. It should focus on what improves quality of life.”

“Harris County files this lawsuit to challenge the actions of TxDOT – a state agency – and its officials in adopting a design and plan that ignored serious harms, disregarded the concerns of the communities impacted by the project, and brushed off the numerous comments they received as part of their flawed (environmental impact statement) process,” the lawsuit states. “(TxDOT) had already made their mind about what they were going to do and then simply did it.”

Just three days prior to the filing of the lawsuit, FHWA sent a letter to TxDOT telling the department to halt the North Houston Highway Improvement Project. FHWA had received three letters raising concerns under Title VI of the Civil Rights Act and related environmental justice concerns regarding the project, including one letter from Hidalgo. TxDOT had just signed a Record of Decision to move forward with the project. FHWA needs the project to be on pause to allow time to complete it Title VI investigation.

In addition to its civil rights investigation, FHWA is reviewing TxDOT’s compliance with the memorandum of understanding with FHWA signed in December 2019. If the federal agency finds any violations, it can withhold signing off on studies needed for the state to move forward. LL