About 22 years ago, the Harwells began leasing their truck to Jacksonville, Fla.-based Landstar. The business model has been successful enough that they’ve continued to operate that way for more than two decades.

But a California law may force the Squaw Valley, Calif., couple to change the way they do business.

The U.S. Supreme Court announced June 30 that it denied the California Trucking Association’s petition for a hearing over the state’s Assembly Bill 5. The denial called for the end of a preliminary injunction that prevented the state from enforcing the worker classification law on motor carriers for the past two years. Once the district court receives the order from the Ninth Circuit, the injunction will be terminated. On July 8, the California Trucking Association said it was expecting that to happen any day now.

AB5, which was passed into law in late 2019, prevents workers who operate inside the company’s usual course of business to be classified as independent contractors.

Barbara Veit-Harwell said she and her husband, David Harwell, are waiting to hear back from Landstar so they can weigh all of their options. Preliminarily, there have been discussions about getting their authority or relocating to another state.

Veit-Harwell, an OOIDA life member, says they are not fans of either of those choices.

She said that the leased-on option works best for them and they don’t want to move at this stage of their lives.

“Landstar doesn’t tell us what to do or where to go,” she said. “But we don’t have to worry about getting paid for our freight. It works for us. If not, we wouldn’t have been with them that long.

“If we felt we were being taken advantage of, we wouldn’t have stayed with them for 22 years.”

California has provided little to no guidance regarding how the law will be enforced, and it is unclear how exactly the courts will interpret the law.

Some carriers already changed their business model in California when AB5 was originally passed into law. Springfield, Mo.-based New Prime, for instance, told Land Line in January 2020 that it had stopped associating with new independent contractors from California and was offering other opportunities, including relocation, to existing contractors.

Land Line was unable to reach Landstar for comment.

OOIDA criticized California for not providing current independent contractors a road map for how to navigate an AB5 landscape.

“With AB5 now set to go into effect, thousands of owner-operators driving in California face an uncertain future,” OOIDA President Todd Spencer said. “California has provided no guidance to owner-operators about how they can work as independent contractors under this new scheme, and truckers will be at the mercy of the courts to interpret how the law will be applied.

“For truckers that have invested their blood, sweat and treasure to create their own businesses, it is dismaying that lawmakers and the courts are forging ahead with this radical policy that dismisses a beneficial business model that has been in place for decades. At the same time, we know this will not be the last word on the legality of AB5 and expect to participate in future challenges to the law.”

Groups, such as the California Trucking Association and OOIDA, will continue to pursue all legal options.

First, the spotlight moves back to the district court to see if it will revive the California Trucking Association’s claim that AB5 violates the Commerce Clause of the U.S. Constitution.

The Commerce Clause protects the right to engage in interstate commerce free of undue burdens and discrimination by state governments.

In addition to the courts, the California Trucking Association is lobbying the state legislature to reverse course regarding AB5 in the trucking industry. LL 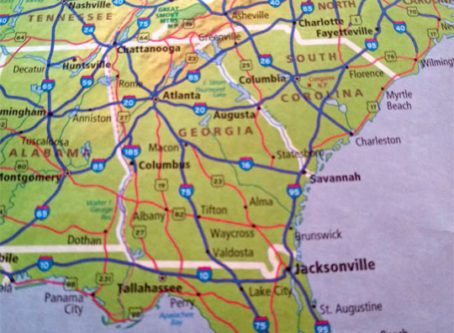 Five Georgia counties to decide this fall on transportation tax

November ballots in five Georgia counties will include a question about whether to authorize or renew a transportation tax.